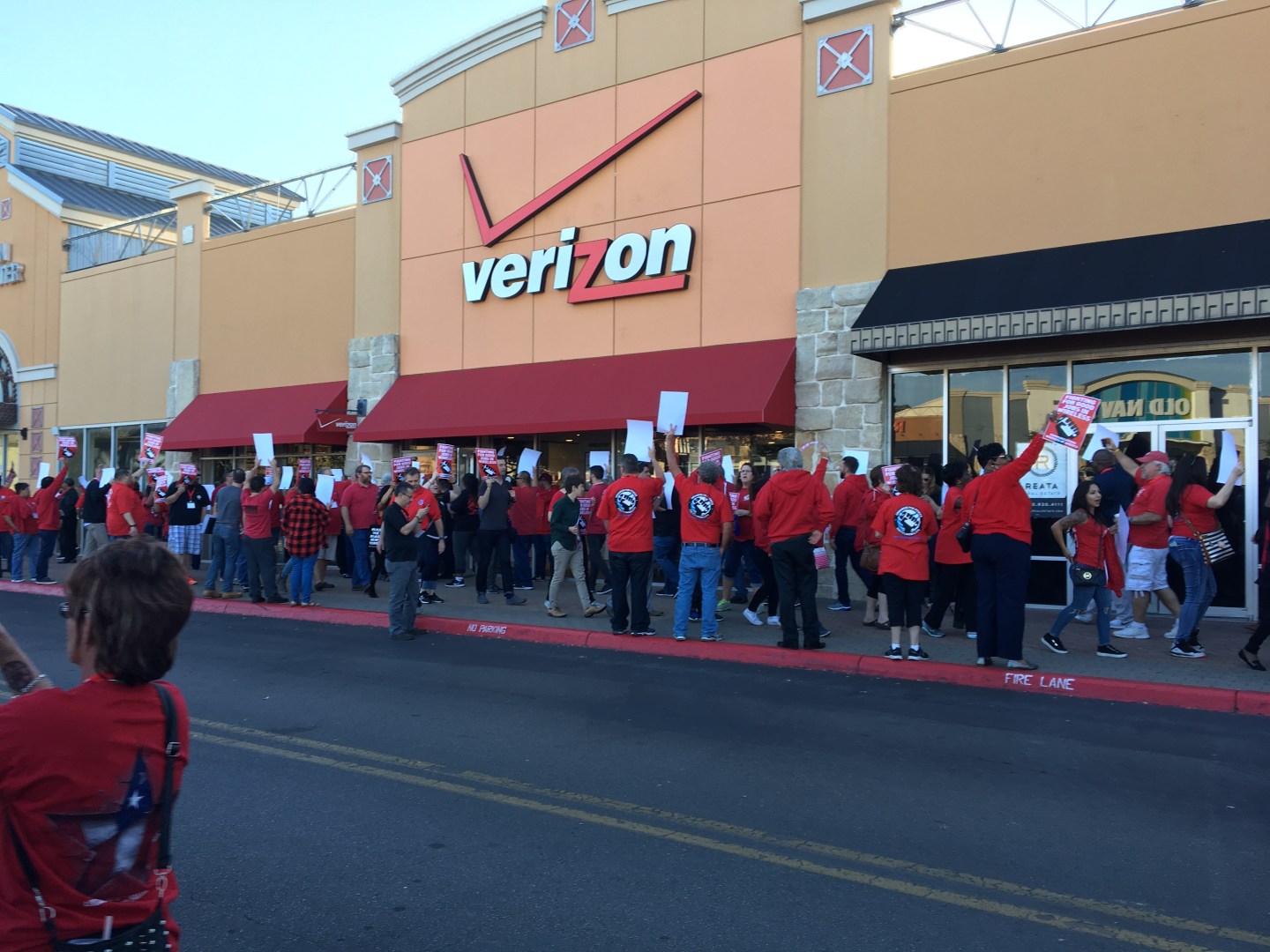 With the old line telephone business shrinking every year, the main union for telecommunications employees is renewing its efforts to organize more workers on the wireless side of the industry.

Hundreds of organizers for the Communications Workers of America union met with leaders in San Antonio this week to plot strategy for reaching more wireless workers. While workers in the old line telephone business were almost entirely in unions, only workers at AT&T, among the major wireless carriers, are highly unionized.

For 2017, the union hopes to make gains at Verizon and T-Mobile while seeking to slow AT&T’s use of unaffiliated partner stores, with non-union employees, to sell wireless service and phones. During the San Antonio conference, workers demonstrated in front of a Verizon wireless store and an authorized AT&T wireless retailer.

The conference comes after some 40,000 workers in Verizon’s old line phone and Internet businesses went on strike in April. After a seven-week strike, the workers ended up with better pay and job security than the company had offered before the walk out. The CWA also made tiny headway on the wireless side in that negotiation, getting workers at a few Verizon mobile stores included in the union.

Verizon (VZ) noted that the CWA has been “overwhelmingly unsuccessful” in unionizing efforts among its wireless workforce. “While we respect the rights of our employees to consider these efforts, we’re quite confident that the vast majority of our workforce believes Verizon Wireless as a great place to work and will continue to reject union representation,” the company said in a statement to Fortune.

The conference included a panel of Verizon workers from across the company discussing the strike. Organizing Verizon workers is a “major CWA priority,” union president Chris Shelton told the attendees.

T-Mobile (TMUS) workers also spoke in San Antonio. To boost momentum at T-Mobile, the third-largest wireless carrier, the union set up a new office this summer to improve outreach to call center employees in Kansas. Not enough workers have signed up at any work site to reach the 30% minimum needed to trigger a formal unionization election overseen by the National Labor Relations Board.

AT&T (T) has a major contract with the union covering wireless workers coming up for bargaining early next year. Though the union will push to limit jobs farmed out to wireless stores not owned by AT&T, the two sides have successfully reached agreement on 19 contracts in a row since the beginning of 2015. Last month, about 2,000 workers in AT&T’s wired Internet business approved a new three-year contract.

For more about the impact of the Verizon strike, watch:

AT&T noted that it is the largest employer of full-time union workers in the country. “We’re proud of our longstanding strong relationships with our unions,” the company said in a statement to Fortune. “We’ve always utilized a variety of distribution channels to provide a mix of options for our customers.”

Still, the CWA faces a number of serious obstacles to expanding in the wireless business, not the least of which is the companies’ strong efforts to fend them off. Also, the incoming administration of President-elect Donald Trump is likely to make pro-business appointments to the NLRB and Labor Department, which had aided unions under the Obama administration.

And the union push is coming just as growth in the wireless market has slowed and there is more pressure from Wall Street to cut costs.