In the Age of Digitalization, Lego Just Opened Its Biggest Store Ever 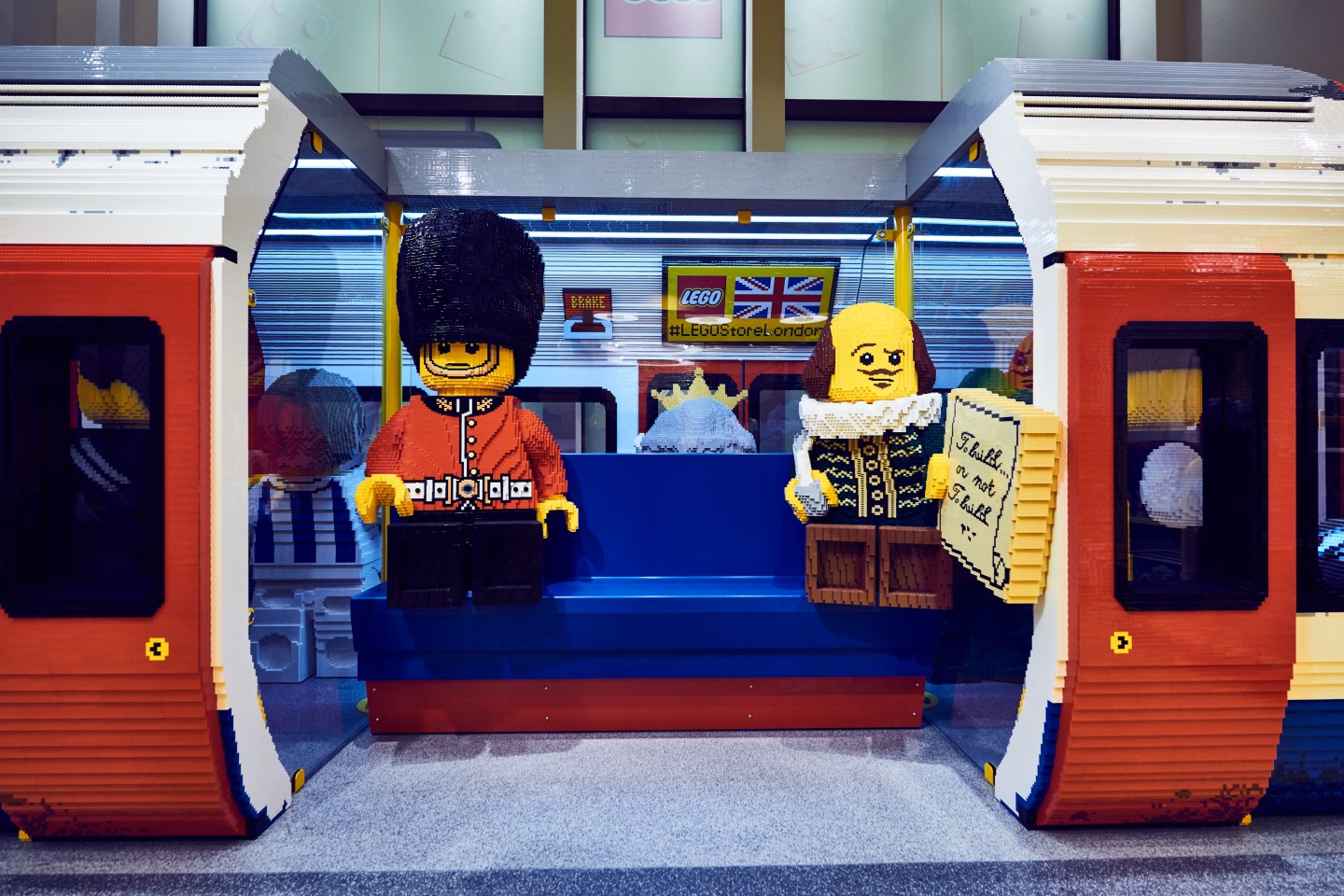 Lego’s latest flagship store opened Thursday in London’s Leicester Square. The two-storey store—complete with a life-sized London Underground tube carriage made up of 637,903 bricks and a 20-foot replica of Big Ben—is the largest of its kind in the world.

As the store held its grand opening, Fortune met with John Goodwin, executive vice president and chief financial officer of the Lego Group, to discuss Lego’s new London hub, how Brexit and Donald Trump’s election will affect the company, and what’s next for the tiny yellow bricks.

Fortune: At a time when so many people are buying their toys online, what is the need for a traditional brick-and-mortar store?

John Goodwin: We believe that physical stores are a really important part of our overall Lego brand proposition. These stores are so much more than just a way to see the face of the products that we have to offer—they are environments for people to immerse themselves in and see and experience models and fantastic constructions firsthand. It’s not that we think online shopping is not important, but we think it’s all about providing multiple touch points for consumers.

JG: This is our 131st store, so we’ve gained a lot of experience from previous stores that we’ve looked to bring in here. One thing that is unique about this London store is the Mosaic Portrait system that we have upstairs. You can have your photograph taken in the booth, and it automatically creates a mosaic model of your face. That is then presented to you in a box so you can make your own portrait out of Lego bricks. That all happens in the same day. We’re hopeful that it’s going to be a really popular addition to our store repertoire.

F: With the advent of technology like virtual and augmented reality, do you feel the pressure to digitalize?

JG: Our CEO has a great saying: “‘Technology’ only applies to those things that occur after you’re born.” Tablets and smartphones are not technology for children born today; it’s just the world that they came into. And in the future, VR and AR are just going to be the world children are born into. So what’s really important is that the Lego brand is relevant in that world, so we’re constantly evolving and ensuring that Lego remains relevant.

F: What sort of developments are in the pipeline for Lego?

JG: Next week we are opening a Chinese factory in Jiaxing, near Shanghai, in order to supply the Chinese market, which is an amazing opportunity for us. We’re building the factory not to ship products over to Europe, but to supply to the Asian market and particularly the Chinese market. About 80% of our sales currently come from markets that only contain 20% of the world’s children, so there are lots of opportunities out there for us.

F: Do you have concerns about the tariffs that President-elect Trump may enforce?

JG: America’s Legos come from Mexico, so we’re monitoring the situation very carefully; free trade’s very important to us as it’s a central part of our business model. It’s too early to say whether we’ll move back to the U.S. based on the statements that have been made, but the most important thing for us is to be able to keep delivering Legos to U.S. children—and we’ll make sure we can keep doing that.

F: Has Brexit had any effect on Lego and do you expect it to in the future?

JG: As free trade is so important to us, we have to monitor the developments of Brexit carefully. Also, the U.K. plays an important role for us globally because we have global hub based in London, where we do a number of activities that impact our products around the globe and people are recruited from all backgrounds. We’ll need to monitor Brexit developments to ensure we can still leverage the great attraction of London. We try very hard to be non-political, but we are strongly committed to reaching all children and finding a way to do that.

F: In terms of being non-political, Lego was in the news this week for ending its relationship with the right-leaning British tabloid, The Daily Mail. (Lego recently said it would no longer run giveaways with the paper a week after a parent penned an open letter to Lego complaining of the Mail’s “unashamed discrimination towards sections of our society.”) Was that a significant decision for the company?

JG: We were running a distribution promotion with the Mail that has now ended, and we’ve got no plans in the foreseeable future to do that again. I think it’s important for us to listen to our consumers; that always drives us. We have 1.8 million different consumer contacts, whether that be in stores like this or a consumer helpline, and we try very hard to listen to what’s important to children, their parents, and their grandparents and to respond to that.

In my four-plus years with the company, it’s never been political things that have driven us—it’s always the consumer that drives what we do, and as the consumers’ moods change then we change too.

F: Lego is a private company—would it ever go public?

JG: Our family owners are completely committed to expanding Lego play experiences throughout the whole world. I personally cannot conceive of any circumstance in which that would change.

F: Lego has come under fire in the past for creating toys that play to gender stereotypes. What do you say to that?

JG: We’ve never in our history intended Lego to be gender-specific, but what we do try to do is develop products that appeal to different play patterns. What’s a reality is certain children—typically boys—like conflict-based play environments and other children—typically girls—like relationship-based play environments. We’ve tried to create product themes that appeal to all of these different interest levels and sometimes this can be misinterpreted as us saying ‘this is only for girls’ or ‘this is only for boys’, but that’s not our intention at all.

JG: I love all the product range, but if I had to choose one line I’d choose the ‘Creator’ line, which combines real-life experiences with really fun models, while allowing a degree of personal adaptation.

(This interview was edited for length and clarity.)