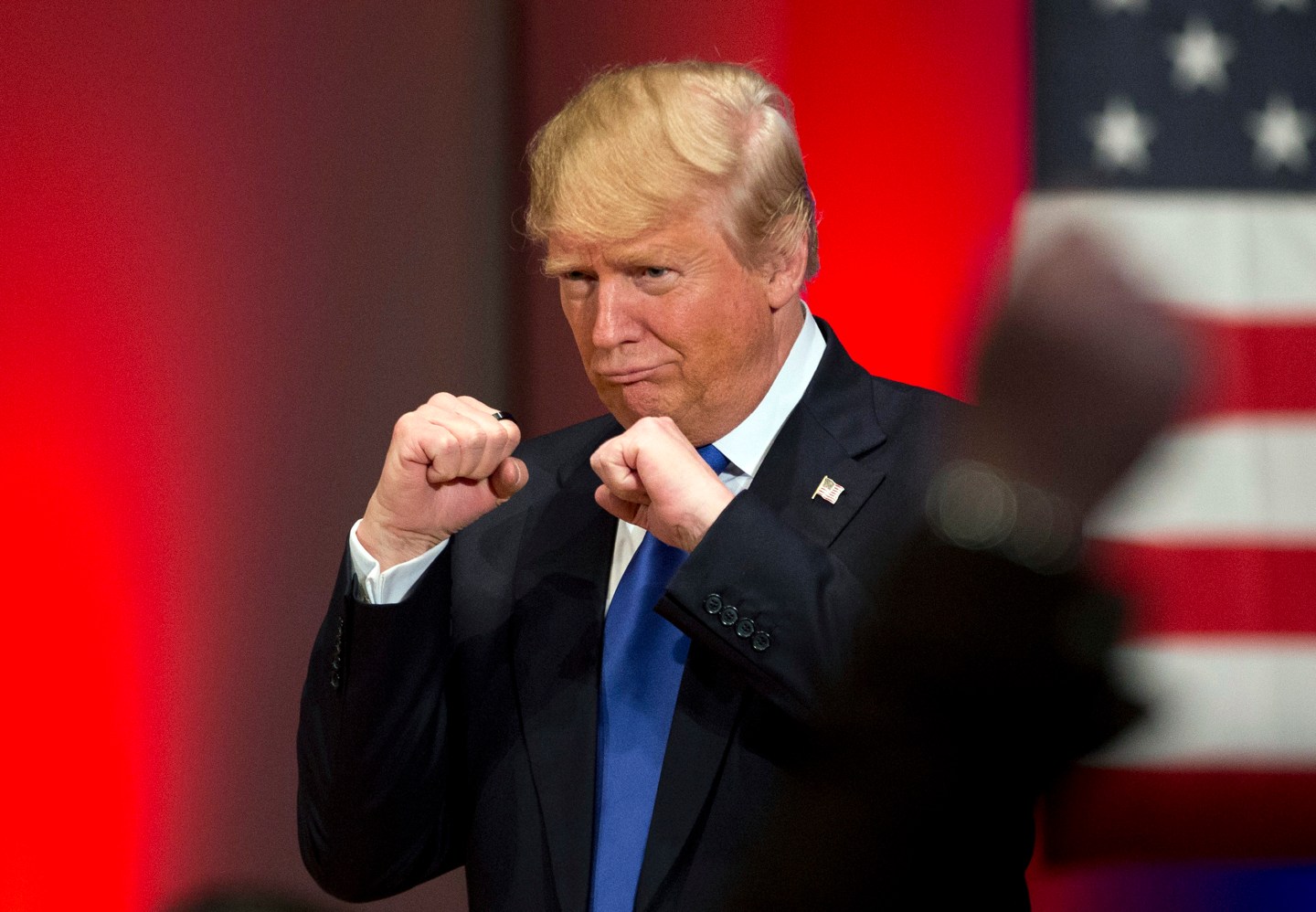 FILE - In this Jan. 28, 2016, file photo, Republican presidential candidate Donald Trump poses with a ring given to him by a group of veterans during a campaign event on the campus of Drake University in Des Moines, Iowa. (AP Photo/Jae C. Hong, File)
Photograph by Jae C. Hong—AP

The biggest x factor in the global economy is the Donald Trump Administration.

Just ask financial markets, which have reacted strongly to last week’s election. Stock markets have perked up on the news, betting that Trump will increase infrastructure spending, while cutting taxes and regulations.

But bond markets have cratered—prices have fallen a big for the bond market 1.4% in past week—since the Nov. 8 election, breaking a recent streak in which stocks and bonds have been strongly correlated. That correlation has some theoretical backing: If financial assets’ value is determined by the present value of future income, then it makes sense that both stocks and bonds will be worth more if the economy is doing well, as a stronger economy means higher earnings which is a boon for both lenders and owners of stock.

But the existence of inflation throws a wrench in this logic. The higher inflation gets, the worse bonds will perform. That’s because bond investors will receive fixed payments regardless of the level of inflation, which erodes the real value of those payments over time. The value of equity investments, however, is a bit more flexible. Companies can raise prices or dividends in response to higher inflation, protecting the value of a stock investment.

But in a world of low or even nonexistent inflation, this dynamic had little effect on financial markets.

As you can see from the above chart, stocks and bonds correlated strongly over the past year, but that all changed last week. According to Jim O’Sullivan, Chief U.S. Economist with High Frequency Economics, “prospects of new stimulus has clearly been a driver of the bond market,” since last week’s presidential election. Bond investors have been selling U.S. Treasuries and other bonds, predicting that a Trump Administration would follow through on its promises to spend big on infrastructure and tax cuts.

Such spending at a time of low unemployment and rising wages should cause prices to rise, eroding the value of bonds. At the same time, more government spending should boost overall demand in the economy and be a boon for stock prices, especially those in the construction sector that rely heavily on government contracts.

There are several flaws in the markets thinking, however. While the U.S. government is unified under Republican rule, it’s not unified ideologically. The Republican Congress has been pushing for tax cuts, sure, but it’s also believes in cuts in entitlement and other spending, with the goal of balancing the federal budget within 10 years. That would necessitate deep cuts to programs that benefit poor and middle-class Americans, sapping their spending power. The benefits of such a program would also filter to the well-off, who are more inclined to save windfall income rather than spend it.

Second, higher inflation could cause the Fed to move to raise rates, which won’t be good for bonds, but shouldn’t be good for stocks either. “I’m very confident that this rise in rates is very dangerous in equities as a whole, not just in some sectors,” Peter Boockvar, chief market analyst for The Lindsey Group, told MarketWatch.

Boockvar argues the the stock market is already expensive, in terms of price-to-earnings ratio, as a result of central banks pushing easy money on markets and the lack of other investment opportunities. Meanwhile, if Trump follows up on anti-growth measures like putting up trade barriers, that could take the steam out of the ability of tax and regulation cuts to increase economic growth.

This is why economists from Goldman Sachs are warning that a Trump Administration could usher in an era of “stagflation” where the economy sees rising prices but slow growth to go along with. If this scenario comes to fruition, bond markets will continue to fall, but the stock market won’t be far behind.