Meet the Woman Working to Make Delivery-by-Drone a Reality 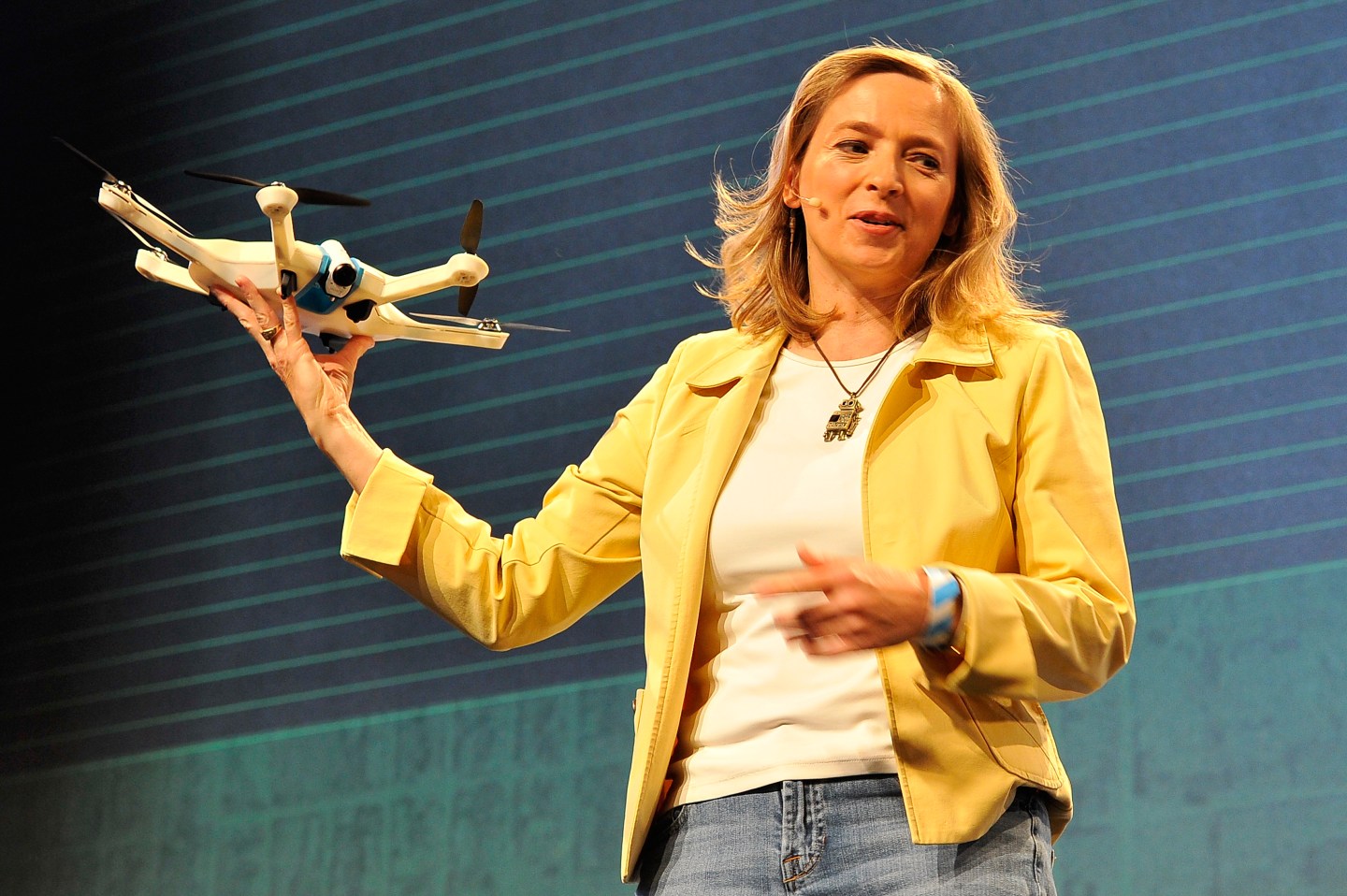 Imagine you’re a camp counselor, overseeing a group of children on a remote island. In the middle of the night, one of your campers has an asthma attack — but her inhaler is nowhere to be found. Just getting to shore will take 30 minutes by boat. Meanwhile, she’s having trouble breathing.

As the co-founder and chief technology officer of CyPhy Works, a startup that builds unmanned aerial vehicles, Helen Greiner believes drones are the solution to hypothetical situations like this one. In September, CyPhy announced it is partnering with the United Parcel Service (UPS) to determine how drones can be used to effectively deliver packages to remote or hard to reach areas.

In one such trail run, an 8-pound, 40-inch drone, carrying a package containing an asthma inhaler, flew from CyPhy’s headquarters in Beverly, Mass., to an island three miles off the coast of Maine where there actually is a children’s camp. The entire trip took about 8 minutes.

Eventually, Greiner predicts that such deliveries will become the norm. Current regulations, and a few logistical roadblocks, however, make delivery-by-drone impractical.

While the Federal Aviation Administration recently loosened some restrictions for commercial drone operators, it still stipulates that, barring a waiver, a drone must be in a operator’s line of sight and cannot fly over unaware people — pretty much nixing most package drop-offs.

But Greiner is hopeful CyPhy will pave the way for widespread drone use. The benefits, particularly for light deliveries, are too valuable to ignore: flight eliminates a lot of obstacles. “I see drones as a way to avoid some of the issues that ground robots have,” she says.

You can take her word for it — Greiner knows a thing or two about robots. Before starting CyPhy, she co-founded iRobot, a Bedford, Mass. startup best known for its floor-vacuuming Roomba device, which has become a consumer sensation and sold millions of units. In fact, a love of consumer-friendly robot technology has been a consistent factor throughout her life.

Born in London, Greiner moved with her parents to the U.S. in 1972 when she was five years old. While she was always interested in technology — she had a Radio Shack TRS-80 computer, and began taking computer programming classes and building video games before she was 12 — it was the George Lucas’ film Star Wars that made a lasting impression.

“R2D2 was my muse,” Greiner says. “He was one of the main characters with an agenda, and a personality, and was more than a machine.”

Her affinity for robotics remained a driving force, first as a student (she studied electrical engineering as an undergrad and computer science as a graduate student at MIT), then at iRobot, and now at CyPhy.

CyPhy creates drones for government, industrial and military purposes, a significant departure from building products for consumers. Unlike iRobot’s vacuums, which are battery operated, the company’s patented technology enables its drones to fly almost indefinitely, thanks to a thin filament that tethers them to a power source on the ground.

This same filament allows the drones to transmit high-definition video and sound, which can be used for surveillance, or to help in military maneuvers. Closer to home, CyPhy’s drones have already been used to help municipalities monitor traffic situations.

To date, CyPhy has raised $32 million in funding from investors including Bessemer Venture Partners, General Catalyst, and Motorola. In part, this is because CyPhy is resolutely not just a drone package delivery company. Due to logistical and regulatory restrictions it will take years before businesses such as Amazon and UPS drop off parcels to consumers’ doors, predicts Gartner senior analyst Gerald Van Hoy. In the meantime, industrial, military, and business-to-business uses for drones, similar to what Cyphy is pursuing now, are likely to advance more rapidly as they operate in relatively closed environments. And because the software and hardware is more complex, revenue opportunities are larger than in the consumer market.

Meanwhile, Greiner is hopeful light consumer package delivery-by-drones will be underway by 2020. And she’s happy to be one of the people making it happen.

“We have this excellent partnership with UPS, and we have a lot of knowledge of their delivery needs,” Greiner says. “A place to start is on the edge of their network, which gives us an opportunity to move.”

An earlier version of this story misidentified Greiner’s title. She is CyPhy’s chief technology officer. She stepped down from her role as CEO in September.