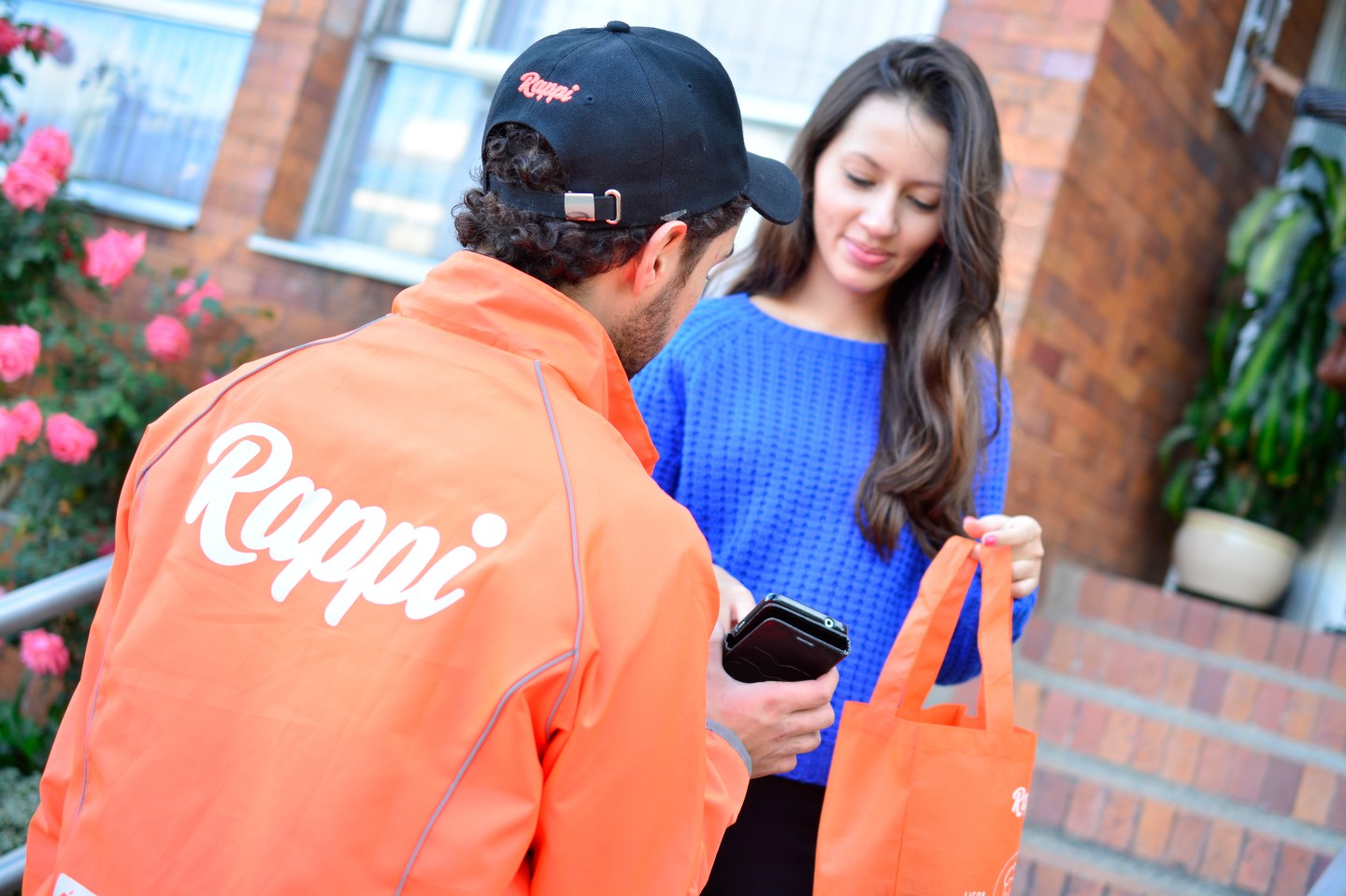 “We actually can be profitable,” Rappi’s founders optimistically proclaimed to a roomful of investors and journalists in March.

It was a detail that needed underscoring considering the focus of their startup, an on-demand delivery service. The once hearty appetite for them among investors has vanished because of the sector’s thin margins, high labor costs, and tricky economics that have caused many similar companies to cut jobs or shut down.

But Rappi, a one-year-old startup based in Colombia, delivering meals, groceries, is betting that it can buck the odds and become a lucrative business. Latin America’s market is better suited for on-demand delivery services than the U.S., according to Simon Borrero, the company’s co-founder and CEO.

“The on-demand economy, we feel, is meant to be in emerging markets,” he told Fortune over coffee last month.

A growing middle and upper class is increasingly warming to the idea of having their meals and groceries delivered to them via motorcycles and bicycles. Additionally, there’s a real need for alternatives to postal services in the region because of their unreliability.

Rappi’s founders realized they had an opportunity to grow beyond delivering dinner and other basic shopping staples when customers started to use the service to have their income tax payments delivered to banks. Yes, customers trust Rappi with their tax documents and hundreds or even thousands of dollars they need to pay at the bank.

From the start, Rappi’s app featured a blank box in which customers could list whatever they wanted delivered. And customers inevitably entered the unexpected.

At least 100 times, customers have paid a courier to walk their dog, according to Borrero. Another unusual and increasingly popular delivery is cash withdrawals.

Customers who have credit cards pay for the amount they want via Rappi’s app, and the courier brings them the cash. Cash withdrawals now make up about 5% of the company’s gross merchandise volume, according to Borrero.

While there are plenty of ATMs in Colombia, where five of the cities Rappi currently serves are located, it’s not always safe to venture out to use them—especially late at night, he explains. So instead, customers request up to 400,000 Colombian pesos, or about $130 U.S., through Rappi’s couriers.

About 60% to 63% of orders are paid in cash, while the rest are paid via the app, using customers’ credit and debit cards, according to Borrero.

In general, profit margins in the industry are thin while managing hundreds of couriers is challenging. RocketSpoon, a U.S. service that cooked and delivered meals shut down earlier this year, as did European food delivery startup Take Eat Easy over the summer, to name a few that have struggled. Last month, Bloomberg reported that payments company Square unsuccessfully attempted to sell its food delivery business, Caviar.

From the start, Rappi has been helped by its second business of partnering with consumer packaged goods (CPG) companies to give them more prominent placement in its app in exchange for a fee. As it happens, prior to Rappi, Borrero and one of his co-founders create and sold online shopping software to large retailers like El Corte Ingles in Spain and Cencosud in Chile. Their company, Grability, also keeps part of the fees that CPG companies pay to have their products prominently featured on the websites and apps of retailers using Grability’s software.

Some U.S. delivery startups, like Instacart and Postmates, have recently begun to strike similar deals with consume packaged goods companies.

These deals also lend themselves well to Rappi’s app, which is organized by products instead of stores, as Jeff Jordan, the partner at Andreessen Horowitz who led his firm’s participation in Rappi’s $9 million round in April, told Fortune. Other investors in the round, undisclosed until now, include Foundation Capital and Redpoint Ventures.

Today, the placement deals account for 55% of Rappi’s revenue, according to Borrero, while the rest comes from the 15% cut it takes from partner merchants for each order and additional fees for handing out product samples to it customers. Last month, for example, Rappi delivered 100,000 Coca-Cola bottles.

Rappi, which isn’t profitable, has about 80,000 monthly users in Colombia, where five of its six markets are located. It completes about 8,700 deliveries daily in total across all cities.

Rappi’s couriers are paid roughly $1 for each delivery.

The company also has some big partnerships like with Wal-Mart’s Mexico City stores as its exclusive delivery service. Recently, Rappi also signed a deal with Sony to be the exclusive seller in Colombia of its PlayStation products like video games and other items.

Of course, larger companies like Amazon and Uber, which operate to varying extents in Latin America, are still a threat. Uber’s ride-hailing service operates in Colombia and other Latin American countries, but Borrero argues that its reliance on cars for rides (and deliveries in countries where its delivery service is available) is a disadvantage considering the heavy traffic in many Latin American cities. However, Uber is apparently learning the lesson and has started to provide rides on motorbikes in India and Southeast Asia. And Amazon is never a company to underestimate.

“I don’t think Rappi is claiming victory at this point,” said Jordan. “The company is off on a good start, but it’s a start.”

The story has been updated to clarify that Andreessen Horowitz did not fund Rappi’s entire $9 million round.