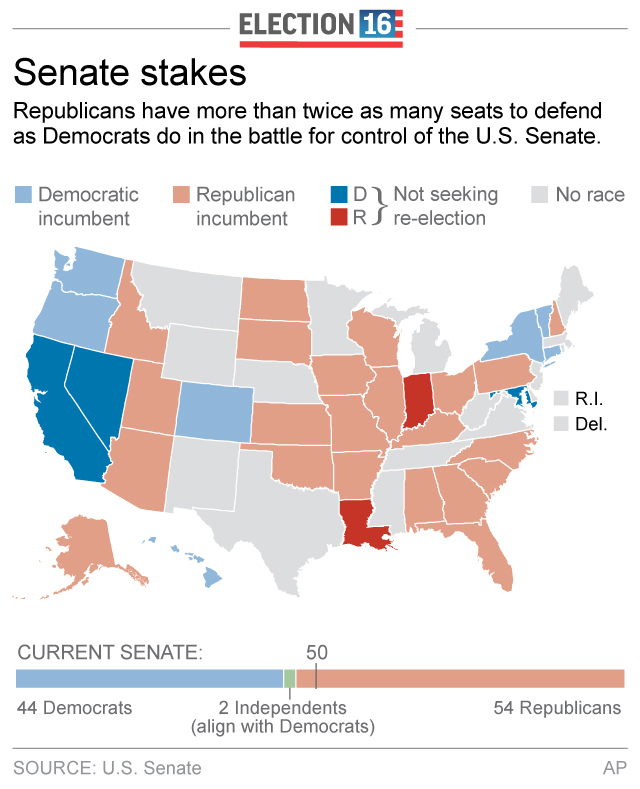 Control of the Senate hung in the balance as candidates from Nevada to New Hampshire made their closing pitches to voters Saturday after a tough and costly campaign. Republicans feared their slim 54-46 majority could slip away as they battled cross-currents from all sides, not least their unconventional presidential nominee, Donald Trump.

The GOP Senate candidates in Pennsylvania and Nevada, Sen. Pat Toomey and Rep. Joe Heck, left voters guessing to the end on whether they were voting for Trump. Both refused to say, in Heck’s case after initially backing Trump, then un-endorsing him last month after tape surfaced in which Trump boasts he can get away with groping women.

“I would like to see her support her nominee,” Daniel Peltier, 21, of Littleton, New Hampshire, said as he finished up breakfast at The Coffee Pot restaurant where Ayotte was campaigning Saturday morning.

Halfway through a statewide tour with 50 stops in five days, Ayotte told diners: “I will kick butt, but I need your vote.”

Overall, Republicans faced a challenging Senate map, defending 24 seats compared with 10 for the Democrats. Democrats need to pick up five seats to take the majority, or four if Hillary Clinton wins the White House and could send her vice president to break ties in a 50-50 Senate.

But a half dozen states could go either way Tuesday: Nevada, New Hampshire, Pennsylvania, Missouri, North Carolina and Indiana.

Speaking to about 80 party faithful at a Veterans of Foreign Wars post in West Chester, Toomey criticized Democrat Katie McGinty as a would-be collaborator on a tax and regulatory policy “that is absolutely devastating our whole economy.”

Senate Majority or Not, Democrats Turn to Hard-Charging Schumer

But Toomey is running a very different message on TV, where ads showing primarily in the Philadelphia area feature praise from President Barack Obama over Toomey’s work on gun issues.

That led to a stinging rebuke from the president Saturday. “Pat Toomey won’t tell Pennsylvania voters where he stands on Donald Trump, trying instead to have it both ways by telling different people what he thinks they want to hear,” Obama said in a statement.

Democrats accused Ayotte of similar mixed messages as she sought to appeal to potential ticket-splitting voters in New Hampshire. Ayotte produced an online ad with images of Chelsea Clinton as the Democratic nominee’s daughter campaigned at local colleges.

Hundreds of millions of dollars were being spent by both sides, through the official party committees and super-PACs aligned with the Senate leaders, Majority Leader Mitch McConnell, R-Ky., and Minority Leader Harry Reid, D-Nev.

Reid’s retirement after five terms created a vacancy in Nevada that is the one Democratic-held seat being seriously contested by the GOP. Heck faced former Nevada Attorney General Catherine Cortez Masto, who would be the first Latina U.S. senator and hoped to benefit from Latino voters’ suspicion of Trump and a hefty get-out-the-vote effort by Nevada unions.

Cortez Masto stopped by a Mexican grocery store late Friday where some people waited hours to cast their votes on the final day of early voting and where elections officials extended the cutoff two hours to accommodate crowds. Nevada Republicans planned a massive weekend get-out-the-vote push to try to counteract Democrats’ strong performance in early voting, but Heck himself was making fewer appearances than Cortez Masto after struggling to explain his stances on Trump.

In North Carolina, Missouri, Indiana, Florida and Wisconsin, Republican incumbents were supporting Trump, though with varying degrees of enthusiasm. And GOP operatives complained that unlike a normal election year, when the top of the ticket would be working as a team with down-ballot candidates, that level of cooperation was absent on the Republican side even as Democratic candidates were benefiting from strong support from the Clinton campaign.

Two GOP incumbents who arguably should be safe in Republican-friendly states were in extremely tight races: Sens. Roy Blunt in Missouri and Richard Burr in North Carolina. Blunt faced an energetic young Democrat, Secretary of State Jason Kander, who was capitalizing on voters’ outsider mood to tag Blunt as a Washington insider, a message he tried to pound home on a bus tour in the final weekend of the campaign. Blunt responded with new messaging criticizing the “Clinton-Kander” agenda.

In North Carolina, in keeping with a laid-back style that’s given national GOP operatives fits, Burr was traveling on his own for much of the day without his campaign staff in tow, with plans to attend a fish fry in Catawba County in late afternoon. His opponent, Democrat Deborah Ross, spent part of Saturday encouraging voters on the final day of early voting.