Senate Majority or Not, Democrats Turn to Hard-Charging Schumer 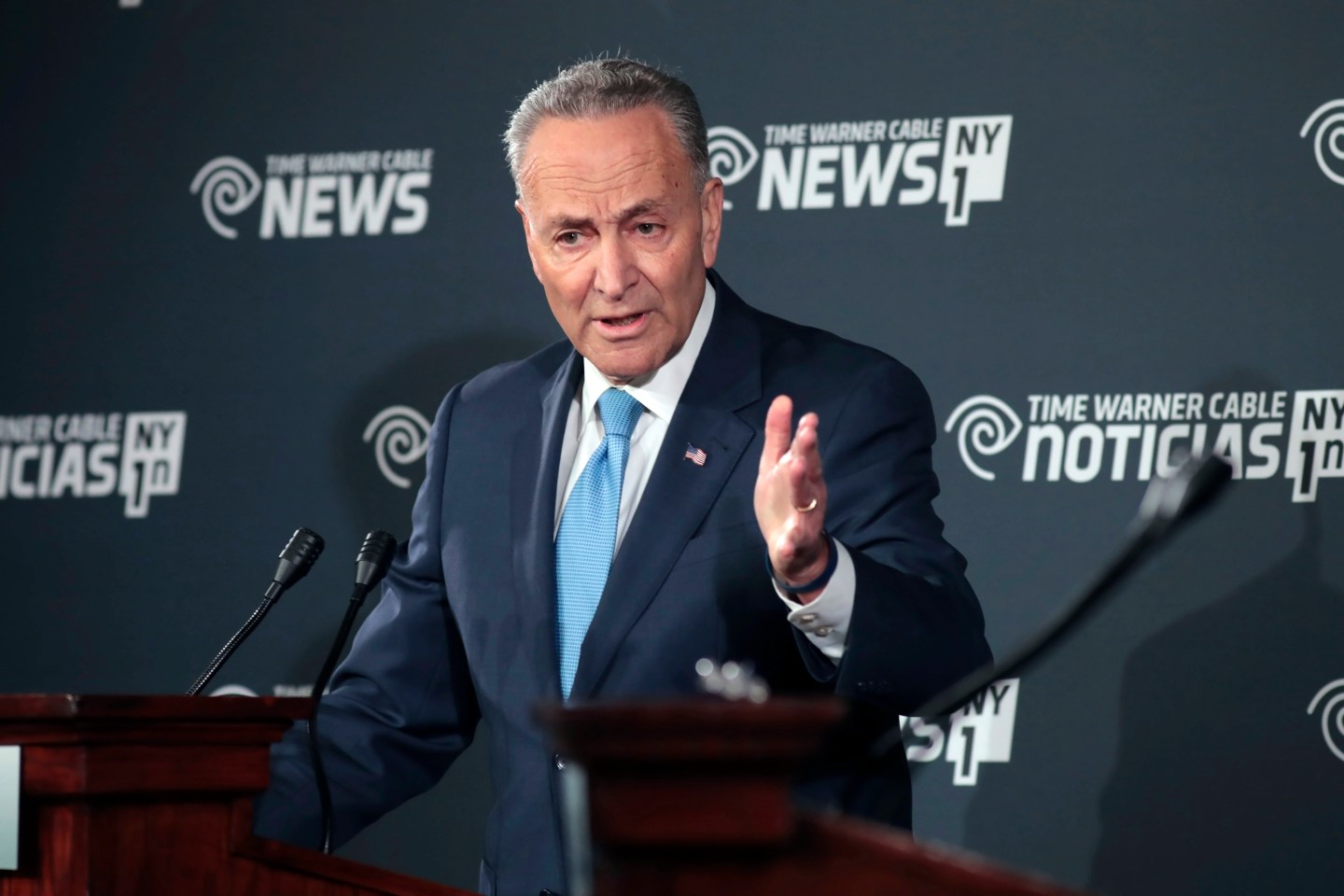 FILE - In this Oct. 30, 2016, file photo, Sen. Charles Schumer, D-N.Y., speaks during a debate with Senate challenger Wendy Long, R-N.Y., at Union College in Schenectady, N.Y. The Democratic Party’s fault lines have been overshadowed by the near civil war within the GOP. But Democrats will face their own divisions after Election Day, and the battle over the party’s heart, soul and future may well play out on the floor of the U.S. Senate, under direction of a new Democratic leader, Schumer. (Nathaniel Brooks/The New York Times via AP, Pool)
Photograph by Nathaniel Brooks—AP

The Democratic Party’s fault lines have been overshadowed by the near civil war within the GOP. But Democrats will face their own divisions after Election Day, and the battle over the party’s heart, soul and future may well play out on the floor of the Senate, under direction of a new Democratic leader, Chuck Schumer.

It’s a challenge the canny, 65-year-old New Yorker has been eyeing for years. When Senate Minority Leader Harry Reid, D-Nev., announced his retirement, Schumer managed to leapfrog Reid’s No. 2, Dick Durbin of Illinois, and sew up the necessary support from fellow Democrats to claim the job.

Tuesday’s election will determine whether Schumer leads a Democratic majority in the Senate, or a minority if Republicans manage to defend their 54-46 seat advantage. If the GOP does keep Senate control, it will be despite Schumer’s constant maneuvering and more than $8 million in campaign money he raised or donated to Democrats.

And whether it’s Democrat Hillary Clinton or Republican Donald Trump who is elected president, Schumer will have a fellow New Yorker in the White House. With Clinton, they could resume the partnership they forged while serving together as senators.

Regardless of those outcomes it may be the dynamics within Schumer’s own Democratic caucus that occupy him the most.

The party’s resurgent liberal wing, exemplified by Sens. Elizabeth Warren of Massachusetts and Bernie Sanders of Vermont, will be ready for a fight. But a group of Democratic senators representing red states, including Indiana, West Virginia, Montana and North Dakota, will be up for re-election in 2018, potentially exerting pressure from the opposite direction.

All that could leave Schumer in the position of key deal-maker in what’s likely to be a new era of divided government in Washington.

Such sentiments are likely to be welcomed by lawmakers in both parties frustrated with gridlock, which has been exacerbated by frosty relations between Reid and Senate Majority Leader Mitch McConnell, R-Ky.

In their most recent legislative session, lawmakers spent weeks tied in knots over a straightforward spending bill to keep the lights on in government past Election Day. That’s nothing compared to what awaits next year, when the Senate will have to contend with monumental tasks including confirming a Supreme Court nominee and raising the government’s borrowing limit.

Schumer can count supporters in both parties who say his practical tendencies will serve him well navigating those issues and working with McConnell.

“They’re both pragmatists. They’re both partisan, but they respect the Senate as an institution,” said Sen. Lamar Alexander, R-Tenn.

Talkative and publicity-prone, forever working his flip phone, Schumer is almost as well-known for his ability to attract media attention as he is for his stewardship of home-state interests.

As head of a committee involved with inaugural planning, Schumer used a solo limo ride with President Barack Obama on his second inauguration to bend the president’s ear about projects that needed doing in New York State, according to someone who heard the anecdote. He is known for setting up his aides on dates and marriages, and singing the joys of parenthood.

Yet Schumer is also seen as overly self-serving at times, with some accusing him of putting his own political interests first. There’s been grousing from Democrats this year that Schumer spent millions on his own re-election campaign in New York, including to film an ad with a cow, even though he faces mostly token opposition and the money could have gone to support Senate Democratic candidate Rep. Patrick Murphy in Florida.

“The lesson to politicians is if the Democratic Party tells you they got your back, they don’t,” said John Morgan, a Democratic donor in Florida who blames Schumer for Murphy’s likely loss to incumbent GOP Sen. Marco Rubio.

Democrats have defended their decision-making on Florida, pointing to the expense of running ads in the state compared to potential opportunities elsewhere.

Schumer was a lead player in negotiating the bipartisan comprehensive immigration bill that passed the Senate in 2013 but stalled in the House. During that process he talked occasionally to Rep. Paul Ryan, R-Wis., who was working behind the scenes on the issue.

The prospect of action on immigration is exceedingly unlikely if Republicans remain in control of the House. But Schumer struck an optimistic note about working with Ryan, now the House speaker. “He’s far more conservative than I am, but he wants to get things done, as I do,” Schumer said.

If Democrats take the Senate majority, Schumer may face an early test on the Supreme Court. He won’t say if he favors unilateral action, pushed by liberals, to eliminate the ability of Republicans to use endless delaying tactics to block a nominee. “I’m not going to talk about that ’til after the election,” Schumer said.