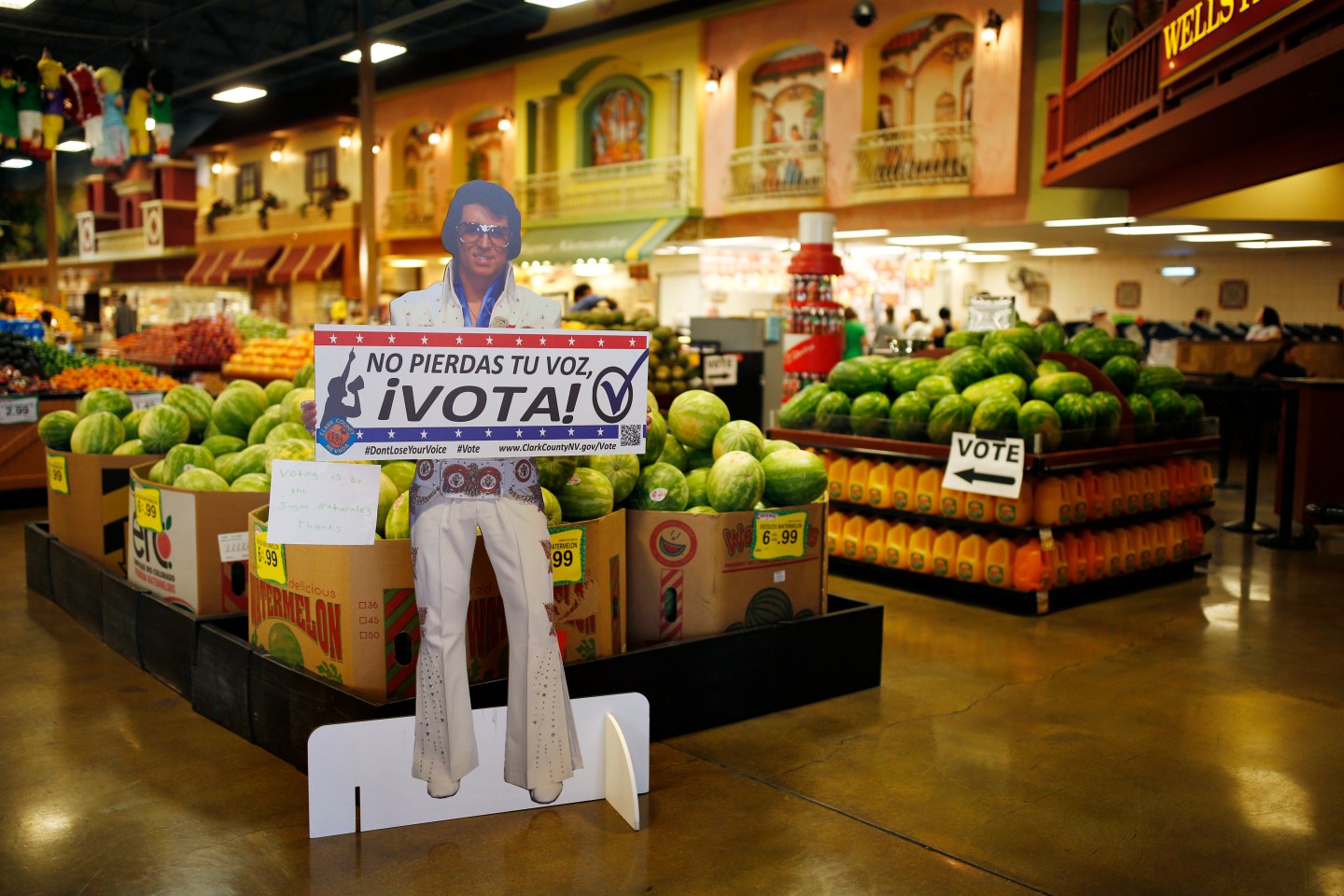 A sign in Spanish which translates, "Don't Lose Your Voice, Vote!" is displayed near a polling place in a Cardenas supermarket in Las Vegas on Friday, June 10, 2016. In the battleground state of Nevada, some 17 percent of eligible voters are Hispanics. Here, Latinos have clearly demonstrated the power they wield when they either turn out or stay home. In 2008 and 2012 they helped President Barack Obama; they were critical in re-electing Sen. Harry Reid in 2010. In the 2014 midterms, though, Hispanic turnout plummeted, and Republicans swept every statewide office and won control of both houses of the Legislature for the first time since 1929. (AP Photo/John Locher)
John Locher AP

It was more than two hours after early voting was scheduled to end at a Mexican grocery store in Las Vegas and the last voters were still trickling out of the sliding glass doors, fresh from casting their ballots next to mounds of dried chiles, rows of piñatas and a horchata stand.

Isabel Garcia and her two young children stood firm for about two hours in a line that at one point snaked back and forth several times over in front of the supermarket in this heavily Hispanic neighborhood. Democratic operatives joked on Twitter that Donald Trump was finally getting his wall — a crush of Nevadans like Garcia who were determined to vote against him.

“It’s a lot more personal than other elections,” said Garcia, a 36-year-old old restaurant worker. “I have the power of my voice so I have to enforce my voice and come out and vote for the people who can’t do it.”

Heavy turnout in the neighborhood, and the 6 percentage point statewide turnout lead that Democrats logged in the two-week early voting period that ended Friday, comes amid a painstaking effort to translate Nevada’s sizeable Latino population into a political “firewall” that puts victory out of reach for Trump and other Republicans.

Hispanics account for about 28% of this swing state’s population but tend to vote less frequently than other groups. Their underwhelming participation is part of the reason Republicans seized widespread power in Nevada in the 2014 elections.

“It’s a matter of really breaking it down to our community about what we have and what we could lose if we don’t go out and vote,” said Emily Zamora, Nevada coordinator for iAmerica.

Zamora’s group, whose work included familiarizing new citizens with how voting machines work, is part of a patchwork of unions and advocacy groups that have labored for months to turn immigrants into citizens, citizens into eligible voters, and eligible voters into people who actually show up at the polls.

The heavily immigrant Culinary Union, which represents about 57,000 workers in the casino industry, helped organize bustling workshops earlier this year to push more than 2,000 people toward naturalization.

One of those was 88-year-old Enriqueta Burciaga de Lucero, a great-grandmother who hails from a small town in the Mexican state of Durango. She is voting for the first time after living in the U.S. for 30 years. She passed her citizenship test and became naturalized just in time to vote for Hillary Clinton in the election.

“I’ve seen on the television that he’s bad,” she said in Spanish about Trump in a recent interview, “and the woman is good and helps the people.”

Republicans have tried to make inroads through organizations like the Libre Initiative, which promotes conservative concepts like school choice to Hispanic voters, and through a deluge of Spanish-language ads that portray Clinton and down-ticket Democrats as corrupt. A Latino Decisions poll from late September and early October shows that the party has won over a fraction of Nevada’s Hispanic voter base, including about 17% who plan to vote for Trump.

“I can’t wait for him to build the wall,” said Blanca Murphy, a 33-year-old immigrant from El Salvador who lives in Las Vegas and resonates with the Republican nominee. “He’s not sending me back. He’s not going to send my mom back … he’s going to look for the ones who are destroying this country.”

But mostly, Trump’s talk of a wall and a deportation force appears to have provoked a sleeping giant in Nevada’s estimated 198,000 Latino voters. One of them is 18-year-old Noemi Guigui, whose father is in danger of deportation and who describes the prospect of a Trump presidency as “honestly, really scary.”

Fresh out of high school, she works full-time with the advocacy group Mi Familia Vota, persuading people to vote and speak for those, like her father, who can’t.

“They say that their registration doesn’t count, their vote doesn’t count,” she said. “But I tell them yes it does. You don’t know how many people who aren’t able to vote wish they had the chance to vote. I tell them, ‘You’re going to be the voice for 5 million people.'”