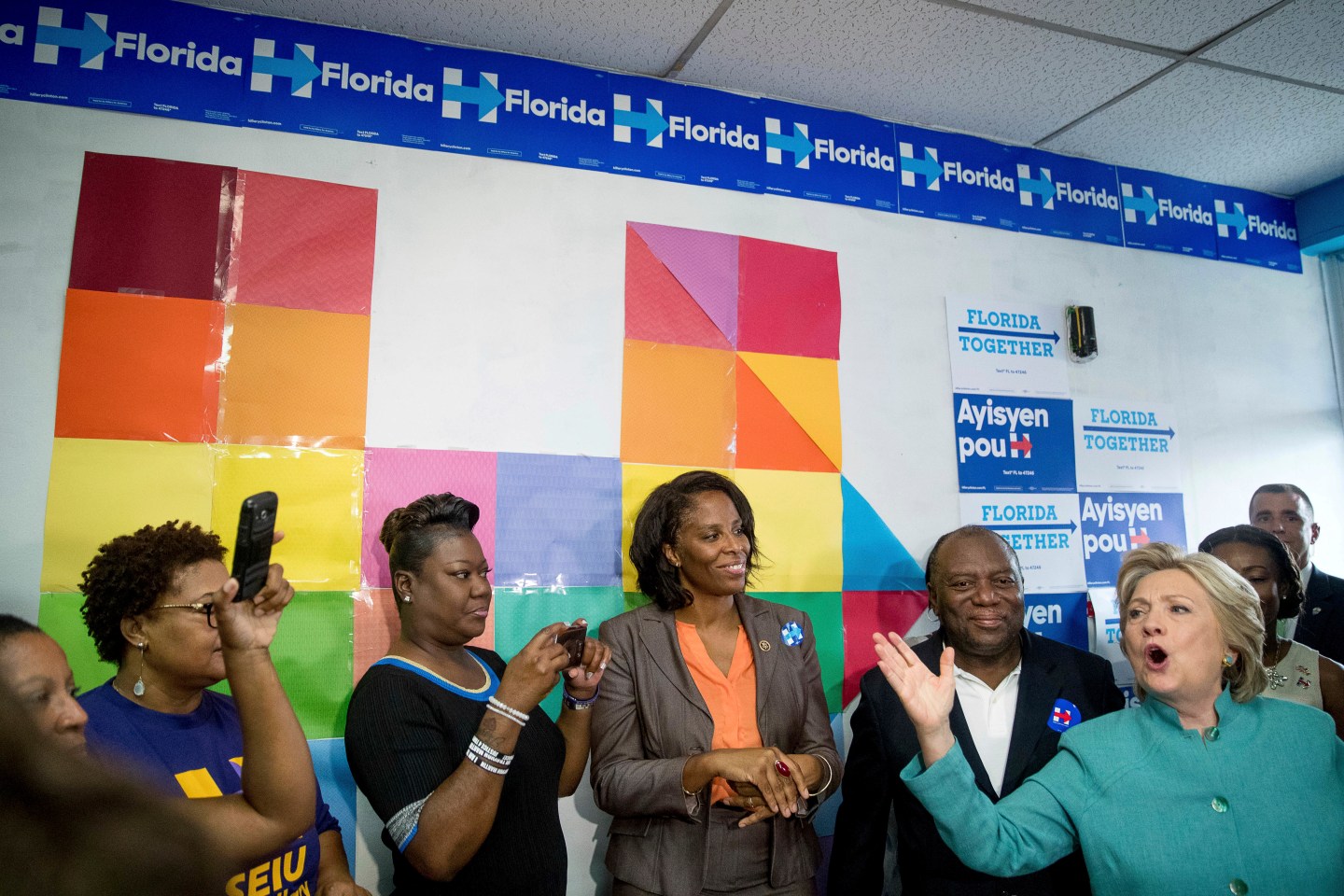 With Hillary Clinton’s lead narrowing recently, the Democrat’s path to the Oval Office appears to rest where it did at the outset—a retooled version of the alliance that twice elected President Barack Obama.

Her aides are calling it “the Hillary coalition,” rather than “the Obama coalition,” distinguished by her dependence on an apparent surge of Hispanic voters, while Obama set records for African-American turnout. But the foundations remain the same: nonwhite voters, millennials and women. Even some Republicans acknowledge that still gives Clinton an advantage over Donald Trump in an increasingly diverse country.

“Everything we are doing is reaching out to our core coalition,” said Clinton aide Marlon Marshall.

Clinton’s battleground blitz involves a bit of everything: 45 million phone calls and door-knocks in targeted neighborhoods; massive rallies with Barack and Michelle Obama in North Carolina and elsewhere; concerts with celebrities in Ohio and Pennsylvania.

Trump maintains his confidence, energizing conservatives and working-class whites with sharpened attacks on Clinton as a corrupt front for an unpopular political establishment. He’s been buoyed by the FBI’s revelations that agents are still eyeing Clinton’s handling of classified national security material when she led the State Department.

In New Hampshire this past week, he warned electing Clinton “would create an unprecedented constitutional crisis.” And he’s mocking Clinton’s celebrity lineups: “I am here all by myself. Just me. No guitar, no piano, no nothing.”

Chris Carr, the Republican National Committee’s political director, said Trump is “rapidly closing in states which pundits said were out of reach just a few weeks ago.” Yet Clinton’s aides and more than a few Republicans still argue that she retains the upper hand, given the diversity in many battleground states key to amassing the 270 electoral votes required to win.

GOP pollster Whit Ayres said Trump’s bounce reflects Republican voters who’ve reluctantly decided to support him. “But what that does,” Ayres said, “is bring us back to the structural advantages … the Democrats enjoy, and will continue to enjoy until my side figures out how to deal with a rapidly changing America.”

Just a few weeks ago, Clinton emerged from her final debate against Trump contemplating a wide popular vote margin, not to mention a big Electoral College win. She and Michelle Obama campaigned in Arizona, usually a GOP stronghold, and her campaign ballyhooed new spending in Missouri, Indiana and elsewhere. Democrats talked openly of sweeping gains in the House and Senate.

Then FBI Director James Comey disclosed his agency was scouring a newly discovered cache of emails that may or may not produce relevant information about how Clinton handled classified State Department materials. Ayres said Comey’s vague letter to congressional Republican leaders was enough for Trump to shift the focus away from his treatment of women and other controversies and remind GOP voters why they so detest Clinton.

The confidence in Trump’s camp notwithstanding, Republicans are left with a familiar conundrum. Four years ago, Mitt Romney won about six out of 10 white voters nationally. That’s roughly the same proportion that George H.W. Bush notched in 1988. The difference was a much whiter electorate: Bush won 426 electoral votes and 41 states; Romney won 24 states good for just 206 electoral votes.

Trump’s appeal among white voters may be enough to flip states like Iowa, which is more than 90% white, and Ohio, where Obama lost ground with white voters from his 2008 election and needed a spike in black turnout to pad his 160,000-vote statewide margin.

But Robby Mook, Clinton’s campaign manager, said that still leaves Clinton with a “firewall” in places like North Carolina, Florida and Nevada, where early voting suggests an increase in Hispanic and Asian-American voting and strong support among African-Americans, even after the president warned the black vote was “not where it needs to be.” Marshall, chief of Clinton’s state-based campaign organizations, said those early returns are the results of a massive campaign operation that’s been building for more than a year.

Marshall and Mook said their analysis also shows Clinton outpacing Trump among white millennials. Obama won young voters overall in 2012 by a wide margin, but that depended on nonwhites; he still lost narrowly among white millennials. Mook also said that even with Trump consolidating some Republican support, Clinton is getting support from white college-educated voters, particularly women, who usually back Republican presidential nominees.

Those trends could also bode well for Clinton in Pennsylvania, a Democratic stronghold that does not have early voting but offers 20 electoral votes Trump needs.