California Cities See Chance to Cash In On Marijuana 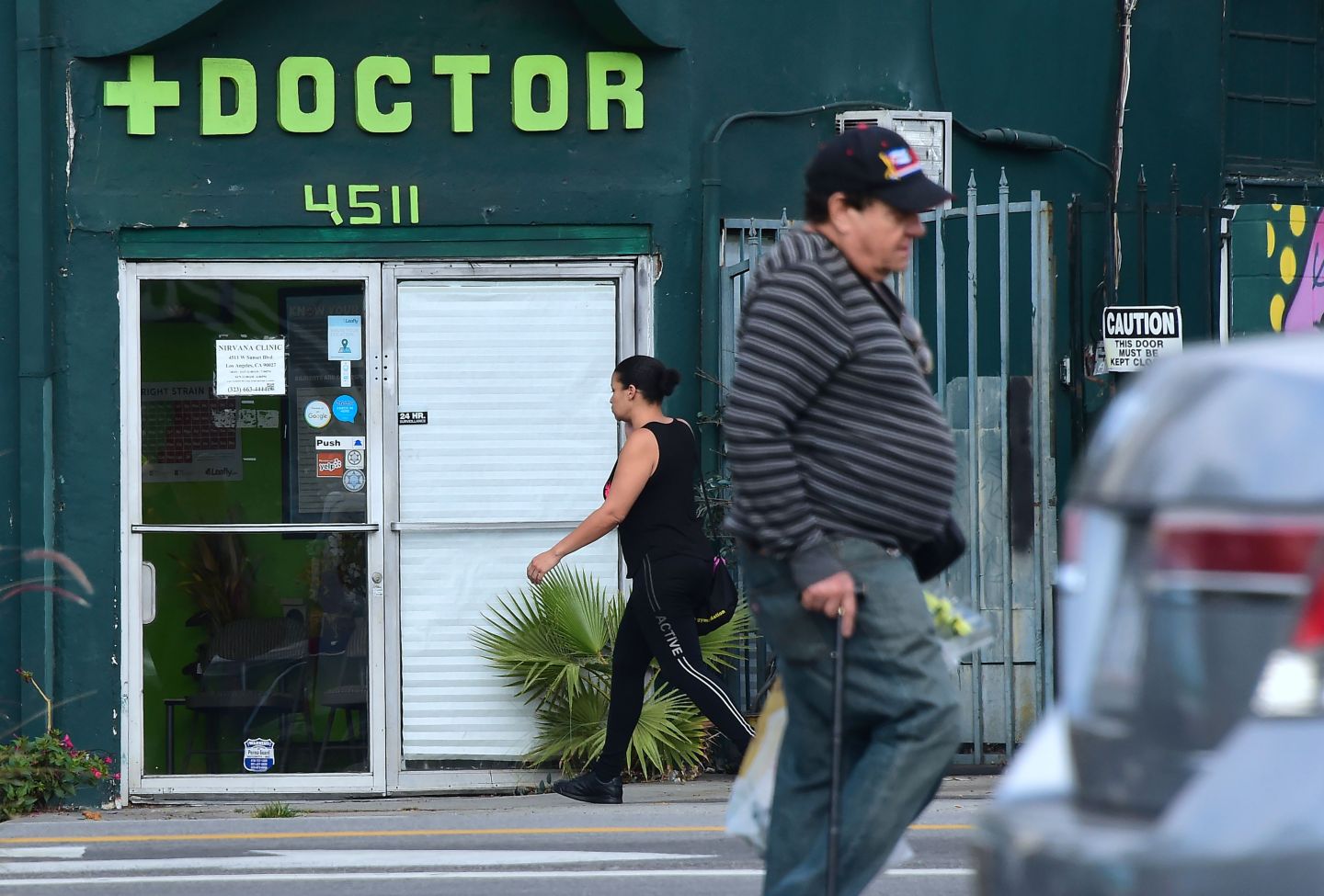 Pedestrians walk past a medical marijuana dispensary in Hollywood, California on November 1, 2016 ahead of next week's general elections, where California is the most populous of the five states considering the legal and controlled sale of recreational marijuana. / AFP / Frederic J. BROWN (Photo credit should read FREDERIC J. BROWN/AFP/Getty Images)
FREDERIC J. BROWN AFP/Getty Images

Californians are expected to pass a ballot measure on Election Day legalizing recreational marijuana, and the prospect has cities and counties seeing dollar signs.

Proposition 64 would impose state taxes on the cultivation and sale of marijuana. But it also allows local jurisdictions to add taxes of their own, something many cities and counties said they plan to do.

Economists warn that burdensome taxes and fees on the nascent industry could backfire, fueling the black market and pushing marijuana businesses to decamp for towns where it’s cheaper to operate. For many city and county officials across California, however, the promise of new revenue to fill budget gaps and fund services is too alluring to pass up.

More than 60 local marijuana measures will appear on ballots across California in Tuesday’s election. In Monterey, a scenic county along the state’s rugged central coast, officials said new local marijuana taxes and fees, if approved, could bring in $30 million, nearly double the county’s $16 million budget deficit.

In Coalinga, a Fresno County community of about 13,000, officials hope to solve a $3 million budget crisis with marijuana taxes. Central California’s King City anticipates new revenues of $1 million to $2 million, or almost 30 percent of the city’s general fund.

Proposed marijuana taxes in Gonzales, population 8,400, are projected to hit $1.6 million, more than the city collects annually in sales and property taxes combined.

“There is no other business that would generate this type of revenue,” Gonzales City Manager Rene Mendez said. “It’s easy to see why this is something that communities want to pursue.”

Some California communities have gone further, announcing plans to reinvent themselves as hubs for the industry.

Desert Hot Springs in Southern California, a town that narrowly skirted bankruptcy after the financial crash, was one of a few cities to pass a marijuana tax in 2014. It is eager for marijuana revenue. The city passed an ordinance to allow for growing and processing businesses to legally operate.

Forecasts for local marijuana taxes – which will be collected in addition to state taxes – are staggering. Desert Hot Springs’ current general fund is about $15 million. But city leaders project marijuana tax collections could reach $1 million next year and, eventually, climb to $50 million if all the available land gets fully built out.

“If the industry takes off, the revenue could be life-changing for this community,” Matas said.

Many of the California communities hoping to cash in on recreational marijuana formed their plans after meeting with David McPherson of HdL Companies, a Southern California consulting firm specializing in revenue strategies for local governments. The former Oakland tax administrator said he believes marijuana provides a rare opportunity for new job growth and tax revenue that could help struggling communities keep pace with rising pension costs and infrastructure and school funding needs.

“It’s almost like the next dot com,” he said.

McPherson is working with 40 communities on marijuana issues and has helped draft a dozen local tax measures for Tuesday’s ballots.

“Cities have really struggled to balance their budgets,” he said. “This is a new industry that’s going to increase significantly and create jobs and more employment in their communities.”

Not all municipalities have embraced high marijuana taxes. Some said they hope to squash the black market by keeping taxes low, so legal businesses can better compete with the illicit supply.

In Mendocino, a longtime marijuana-growing region in Northern California, county officials scoffed at initial projections by McPherson of up to $110 million in annual local taxes – a potential cash infusion equivalent to 60 percent of the county’s general fund. Instead, the county proposed a measure with a much lower tax rate.

“These numbers are designed to make government drool and say,’How much can we get out of our cultivators and farmers?'” said Jude Thilman, a Fort Bragg resident and member of the Mendocino Cannabis Policy Council at a May meeting of the Mendocino County Supervisors. “The farmers are not doing that well. People are barely getting by.”

Nate Bradley, head of the California Cannabis Industry Association, worries that high taxes would encourage farmers to continue growing marijuana illegally. “We want to pull these guys out of the hills. But if you’re looking at them like they’re ATM machines, they are not going to come out of the hills.”

Some cities want to avoid the whole issue by banning all marijuana farming and sales within their jurisdictions, something allowed by the ballot measure.

“There are problems with the cannabis business,” such as the increased costs to law enforcement, he said. “It ends up costing more in the end.”