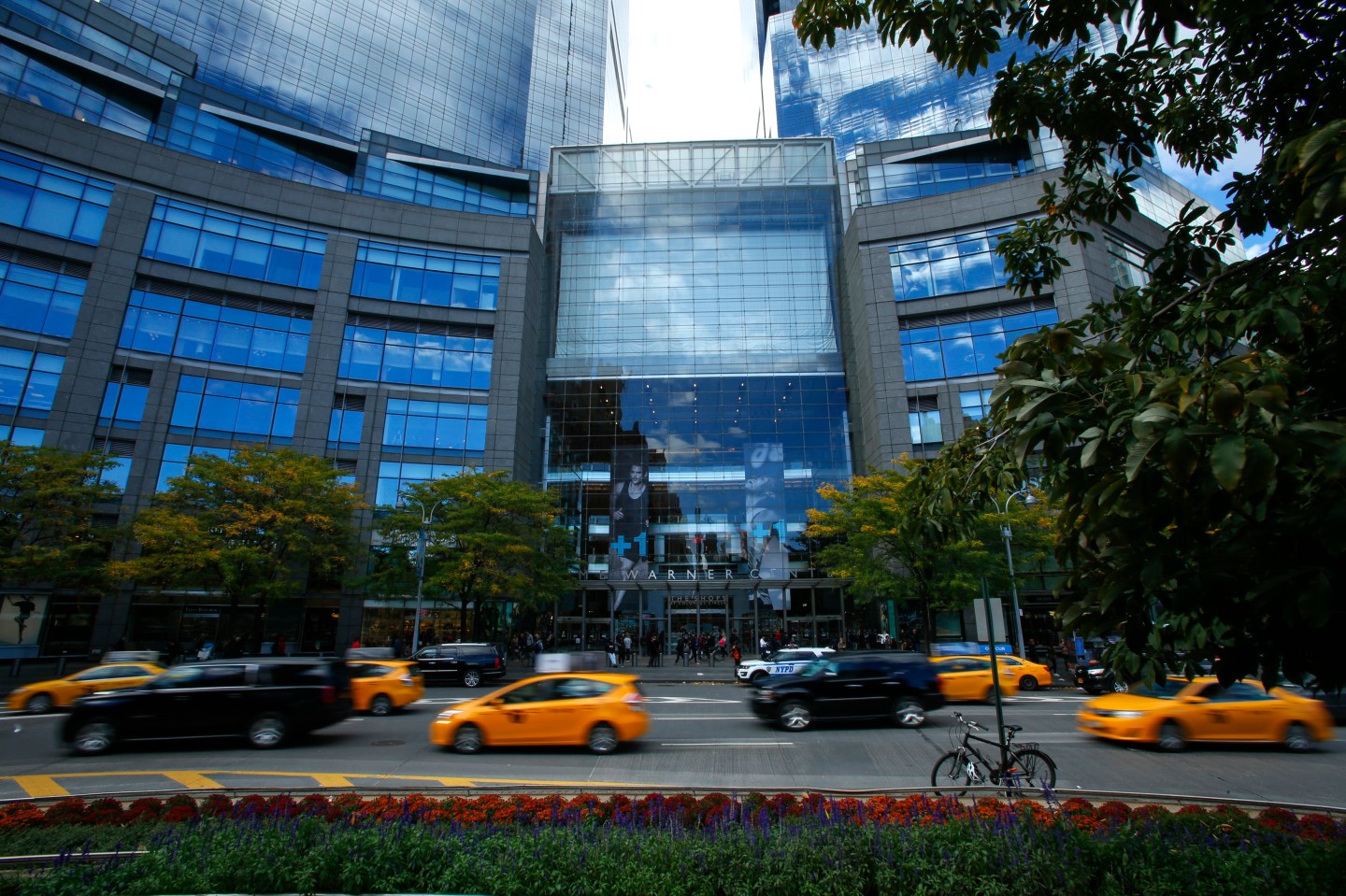 The Time Warner Inc. Center is seen in New York on October 23, 2016. AT&T unveiled a mega-deal for Time Warner that would transform the telecom giant into a media-entertainment powerhouse positioned for a sector facing major technology changes. The stock-and-cash deal is valued at $108.7 billion including debt, and gives a value of $84.5 billion to Time Warner -- a major name in the sector that includes the Warner Bros. studios in Hollywood and an array of TV assets such as HBO and CNN. / AFP / KENA BETANCUR (Photo credit should read KENA BETANCUR/AFP/Getty Images)
Kena Bentancur — AFP/Getty Images

Media companies plan to ask U.S. regulators to force AT&T and Time Warner to share their trove of customer data if the telecom and content companies merge, fearing the combined behemoth would have an unfair advantage selling targeted mobile advertising, a handful of media executives told Reuters this week.

Customer data has become a key to the media industry’s future as TV networks strive to provide the same kind of advertising as digital companies like Alphabet’s Google (GOOG) and Facebook (FB), which tailor pitches according to what they know about their customers.

AT&T’s proposed $85 billion acquisition of Time Warner would give the media company’s networks, such as HBO, Cinemax and Turner, potentially unprecedented data about viewers who have AT&T cell phones and DirecTV accounts.

The deal will be reviewed by the U.S. Justice Department, and it is unclear how the enforcement agency would approach customer data access as an antitrust issue since it has not yet arisen as a source of contention in a major U.S. deal.

With the rise of online and mobile video streaming services, the promise of sending different ads to different viewers appears attainable, starting a race among established media brands.

“With this deal, Time Warner will have access to more data on the content consumption habits than any other media company in the world,” said Patrick Keane, president of Sharethrough, a platform for buying “native” ads.

If Time Warner can use AT&T data to target ads to a group such as young, affluent men who watch a specific sports team, it will have a huge new advantage with advertisers, said an executive at a rival media company. “The money will gravitate to the programming with that data,” the person said, adding that the company would go to regulators. “We are interested in making sure that we have access to our customer data in the same way that Time Warner will have access to data.”

If HBO, which has its own over-the-top streaming video service, gets access to AT&T’s data about viewers watching content on competitors like Hulu, Amazon (AMZN) or Netflix (NFLX), that is also an unfair advantage, said another executive at a separate media company that also plans to ask regulators to act.

All the media executives wished to remain anonymous because conversations are early and confidential.

AT&T (T) and Time Warner (TWX) acknowledge that data is a key driver of the deal.

“What it allows us to do is just move faster, with more innovation, better consumer offerings, more different price points, more effective advertising, and therefore people are going to see that more of the cost of content can be borne by advertising,” Time Warner Chief Jeff Bewkes told CNN on Monday.

And AT&T Chief Executive Randall Stephenson told Reuters at a conference in California that the company is open to allowing other content providers access to customer data.

“To the extent that it keeps their content costs down, we’d be open to it,” he told Reuters.

Rivals are already amassing a significant amount of data from multiple sources. Verizon Communications will be able to tap data from Yahoo’s 1 billion monthly users to tailor advertising if it completes its $4.8 billion purchase of Yahoo’s core assets.

Customer data is a new area for antitrust law, which enforcers will be pressed by media companies to take on in the AT&T case.

“This is a structural advantage that AT&T would have over its rivals, and competition authorities should be concerned about the possible effects,” said John Bergmayer, senior counsel at advocacy group Public Knowledge.

First the Justice Department and Federal Trade Commission, which share the work of ensuring that mergers are legal, must decide if there is a problem and then whether there is a solution.

“Enforcers don’t quite know yet what that (big data) means for antitrust or what to make of it,” said Elai Katz, an antitrust lawyer with the law firm Cahill, Gordon & Reindell LLP.

Katz said that antitrust enforcers would look at how much data was involved, whether it was available from other companies and whether access was a competitive issue before deciding whether it is worth addressing in the merger.

Why the AT&T-Time Warner deal is bad for networks.

Antitrust enforcers usually prefer that companies that want to merge solve any antitrust problems by selling an asset, like a brewery or a factory, rather than have a behavioral condition on a deal, like requiring licensing data, which is harder to enforce.

But such behavioral remedies would “have to be considered in a case like this,” Katz said.

The Federal Communications Commission, which regulates the telecoms industry, still puts behavioral conditions on merger approvals, but it was not clear whether the FCC will consider this deal.

If AT&T has to share data with media rivals, that could undercut the value of the deal, advertisers said. But if AT&T can build a platform with addressable advertising and targeted content, it might compete with new media such as Google, Facebook and Snapchat, said Bernard Gershon, president of media and technology consulting firm Gershon Media.

“The Holy Grail is advanced advertising and delivering custom content and ads,” he said. “It is the data and the direct relationship with the consumer that makes this deal so powerful.”