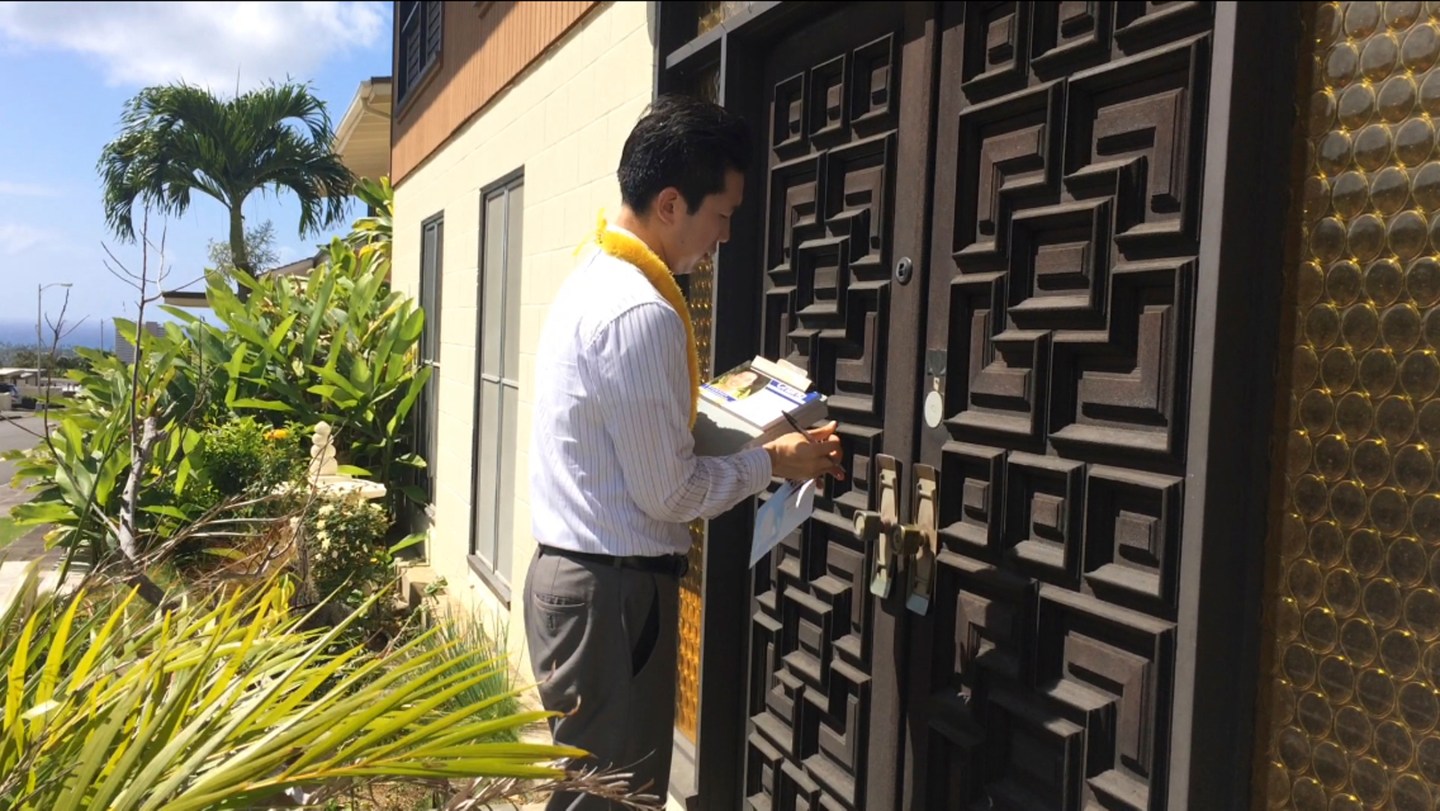 In this Oct. 5, 2016 photo, Stanley Chang, a Democrat running for Hawaii state Senate, canvasses an East Honolulu neighborhood called Kahala that's sent a Republican to the Hawaii Senate for the last 20 years. If Chang wins the race and defeats the state Senate's only Republican, Hawaii could become the first state in the nation to have a one-party state legislative body in decades. AP Photo/Cathy Bussewitz)
Cathy Bussewitz AP

Stanley Chang hiked up a ridge in an affluent neighborhood overlooking the Pacific Ocean, his crisp white shirt deflecting the hot Hawaii sun.

“Aloha,” he called as he eagerly knocked on the door of any voter who could help the 34-year-old Democrat win the only state Senate seat in Hawaii that’s held by a Republican.

If Chang succeeds at ousting Sam Slom, 74, who’s represented the district for 20 years, Hawaii could become the first state in the nation to have a one-party legislative body in decades.

“That would be great, wouldn’t it?” said Eric Meguro, a 61-year-old retiree and Democrat who enthusiastically shook Chang’s hand as the candidate canvassed his neighborhood. “Then we can get a lot of things done.”

Hawaii has long been a Democratic stronghold, with Democratic voters outnumbering Republicans 2-to-1 in the last presidential election.

The party has dominated island politics since around the 1950s, when laborers on sugar plantations—largely immigrants from Asia—unionized to fight for better treatment from the predominantly white, Republican plantation owners who controlled politics during territorial times.

Chang, the son of immigrants from China, said his goal wasn’t to create an all-Democrat Senate in the uphill battle to unseat Slom.

“I didn’t try to pick a seat. This is my community,” Chang said. “This is where I’ve always lived, and this is why I’m fighting for it.”

The last time a party held all the seats in any state Legislature was 1980, when state Senates in Alabama and Louisiana were completely Democratic, said Daniel Diorio, policy specialist at the National Conference of State Legislatures.

As the sole Republican in the Hawaii state Senate, Slom has a tight schedule serving on every legislative committee.

He’s widely viewed as a fiscal watchdog and has never taken a penny of the $13,268 annual legislative allowance he could tap for incidentals such as office supplies and food for guests—the only senator with that distinction, according to Carol Taniguchi, chief clerk of the Senate.

His office helped create a website for members of the public to learn about the state budget.

If he loses his seat, “the taxpayers would be robbed of having questions asked and answers required as to where money has gone,” Slom said, “because what we’ve seen in the past is, everybody gloms on to a particular project, but they don’t ask the fiscal questions.”

Pat Saiki, former chairwoman of the Hawaii Republican Party, wishes there “were about 10 of him so that he could have some company, but at this stage, he is the last one standing.”

“We need an opposition voice. We need representation from another party,” Saiki said.

Slom’s long tenure doesn’t guarantee that his district will remain a Republican stronghold. In the 2012 presidential election, two out of three voters in Slom’s district chose President Barack Obama, a Democrat born in Honolulu, over Republican Mitt Romney. Even so, Slom was re-elected that year, capturing 55% of the vote while his Democratic challenger got 36%.

A reliable breakdown of Democrats and Republicans in the district is not available because voters do not choose political parties when they register to vote in Hawaii. But the wealthy district and its neighboring precincts are known for successfully sending the state’s few Republicans to office.

“It hardly makes a difference, one Republican … but since he’s the only opposition, I keep voting for him,” said Sandy Delmonte, 73, a retired teacher who lives in Kahala.

Welcoming the strong challenge from Chang, Slom has campaigned at neighborhood meetings while staying busy at the Legislature, keeping his office door open so that anyone—whether or not they vote in his district — can walk in and talk to him.

“I’m not a typical politician. I don’t like fundraisers,” Slom said. “Oftentimes, I have talked people out of giving me a check or giving me money, instead telling them to take their family out for dinner or do something for themselves.”

For more on politics, watch:

The outcome in the district could be different this year, with Chang, a Harvard-educated lawyer and former city councilman, using a mobile app to track every house he’s visited and making canvassing his full-time job.

The Democratic Party is hoping that the interest in the presidential election and Chang’s hard work will secure a Democratic victory, state party chairman Tim Vandeveer said.

“They’ve never had a candidate who has had the stature of Stanley Chang run for that seat … he is a formidable opponent,” said Fritz Rohlfing, chairman of the Hawaii Republican Party.