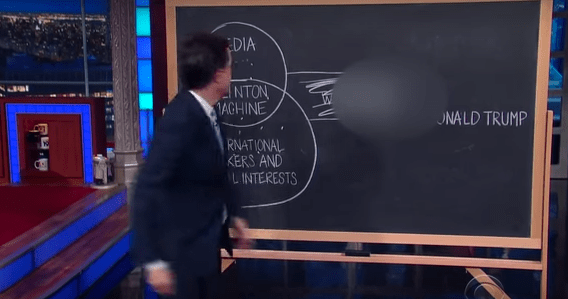 Stephen Colbert has dedicated quite a bit of time over the past year to mocking Donald Trump’s run for the White House. So, it should come as no surprise that Colbert’s attempted explanation of the media “conspiracy” to rig the election ended up as yet another joke at Trump’s expense.

On Monday night’s episode of CBS’ The Late Show, Colbert dove into Trump’s repeated claims that the media is rigging the election in favor of Democrat Hillary Clinton. “Trump has Tweeted multiple times about the media rigging the election, and he’s right,” Colbert said during his monologue last night. “From Day One, the media has rigged this election . . . in favor of Donald Trump! You cannot turn on the TV without seeing Trump—he’s like the Geico Gecko, but more cartoonish.”

Colbert pointed to analysts’ estimates that Trump has received nearly $3 billion worth of free advertising from his constant presence in the news and the media’s habit of airing his rallies and speeches live. Still, Trump has claimed that the recent spate of sexual assault accusations against him are products of a biased media giving a national platform to what he argues are baseless allegations in order to help his opponent.

Trump has also peddled conspiracy theories involving Clinton meeting with foreign leaders and global banks toward nefarious ends, which Colbert highlighted by playing a video clip showing the GOP nominee claiming that “Hillary Clinton meets in secret with international banks to plot the destruction of U.S. sovereignty.” The late-night comedian then brought out what he called an “International Conspiracy Board,” a chalk board on which Colbert had written phrases such as “Media,” “WikiLeaks,” “Clinton Machine,” and “Donald Trump.”

“This supposed sex scandal can all be explained with this venn diagram,” Colbert said as he drew a series of circles and lines around the phrases on the board, purporting to show connections between the Clinton campaign, international banks, and the growing list of accusations against Trump.

But, of course, that’s where the big joke presented itself: within a few seconds, the “diagram” came to resemble a cartoon sketch of male genitalia, which CBS thankfully blurred out. “Oh my God,” Colbert exclaimed. “The plot to make him look like a sexual harasser is coming from inside Donald Trump’s penis!”