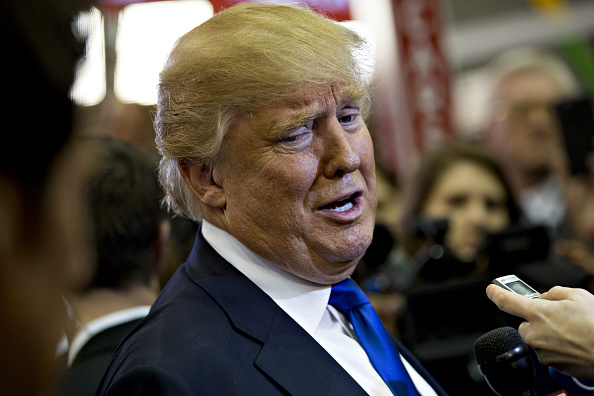 Donald Trump, president and chief executive of Trump Organization Inc. and 2016 Republican presidential candidate, speaks to members of the media while walking through the spin room after the Republican presidential primary candidate debate sponsored by CNN and Telemundo at the University of Houston in Houston, Texas, U.S., on Thursday, Feb. 25, 2016. Donald Trump holds a substantial lead in the southern region where Republican voters have their say on March 1, displaying remarkable strength for a twice-divorced New Yorker in Bible Belt states home to some of the nation's most conservative voters. Photographer: Andrew Harrer/Bloomberg via Getty Images
Photograph by Bloomberg — Getty Images

Donald Trump’s treatment of women is increasingly looking like it’s for than just talk.

According to records obtain by USA Today, Trump and his companies have been accused of sexual harassment 20 times. One woman who worked at Trump’s resort in Miami sued, claiming she was fired after her employers found out she was pregnant. In other instances, women who worked for Trump said they were fired after complaining about sexual harassment. Trump also allegedly spoke about hiring younger and prettier women.

The sexual harassment claims date back to the early 1980s, and are 20 of the 130 employment suits brought against Trump and his companies in that time. Those claims of sexual harassment have researched following the release of a video on Friday of Trump making lewd comments about women.

A lawyer for the Trump Organization, said the number of sexual harassment claims were small relative to the size of his company.

None of the discrimination claims were directly related to Trump’s conduct. But a number of women in one case submitted sworn statements that Trump regularly told managers to recruit women based on their attractiveness.