Colin Kaepernick Is the Hero We Didn’t Know We Wanted 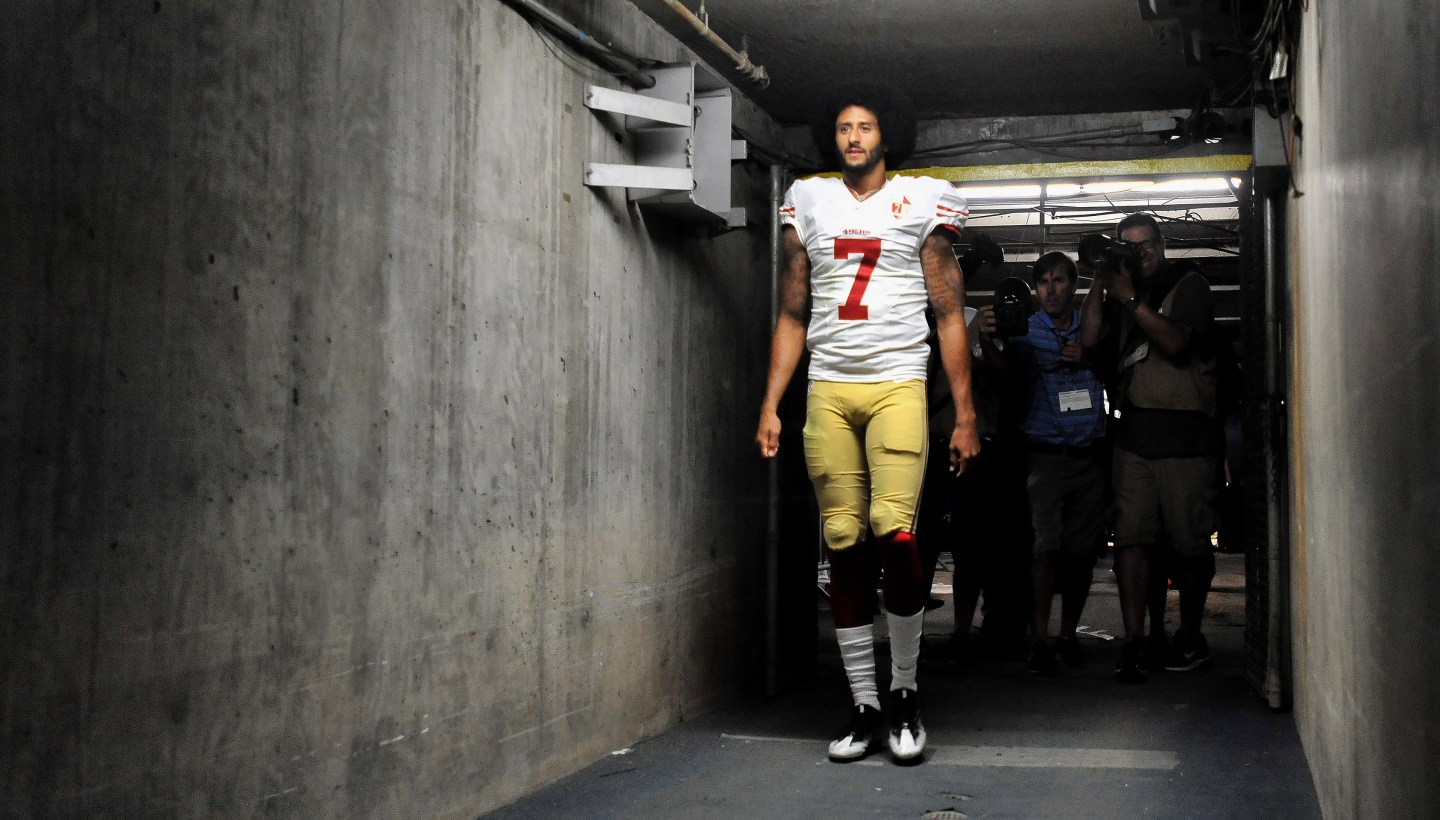 Colin Kaepernick will be returning as starting quarterback for the San Francisco 49’ers this Sunday. His arm, the one that’s earned him the right to take a knee, is going to be in the spotlight again.

It’s an interesting moment. Kaepernick is the activist nobody saw coming, a man who now has a stake in an issue that wasn’t his own. He didn’t get pulled over by the police. He’s not related to Sandra Bland, Eric Garner, or Philando Castile. Why is this his thing? Because he lives in the skin he does. And that makes it complicated for everyone.

In the process, Kaepernick has started a national conversation about national conversations. Who gets to have one? When? And how? You know things have gotten real when you’re publicly sparring with a Supreme Court Justice on how to protest correctly. Ruth Bader Ginsburg told a reporter that she thought his protest was “dumb” and likened it to flag-burning. “At the end of the day, the flag is just a piece of cloth and I am not going to value a piece of cloth over people’s lives,” he said in response. (On Friday afternoon, however, Ginsburg said her comments were “inappropriately dismissive.” )

American football has become an exercise in national pride, a patriotic spectacle that binds us together for a few hours to feel good about watching highly-compensated people working in a multi-billion dollar industry risk permanent injury for our entertainment. See? Complicated.

And yet, it’s also personal. Gathering with friends and family to watch your team play Sunday after Sunday, holiday after holiday is a beautiful thing. Remembering legendary games. Reliving regional rivalries. Me? I’m from New York. Tom Brady could sprout a new kidney once a week and personally stitch it into a needy child, and he would still drive me crazy. But that’s part of the fun.

Except now every time we hear the national anthem, we think about race.

Kaepernick’s gambit puts his wealth and personal brand at risk, though he doesn’t seem to care. But when student-athletes take a knee during the national anthem, as they are in increasing numbers across the country, they risk cleaving their own communities in two, without the benefit of fame, fortune or high profile cover on television. For everyone involved, including the kids who stand awkwardly beside their kneeling teammates, the national conversation has become their locker room talk. The degree to which these conversations go well should be the primary benchmark by which we measure Kaepernick’s success.

I’ll leave you with a story from another sport and another era that affects me deeply every time I read it.

In her short but powerful book, On Boxing, Joyce Carol Oates shared a quote from Martin Luther King that perfectly encapsulates the intersection of race, racism, and heroism in a complex world that hasn’t changed as much as we’d like to think:

At the very end of his life, the “young Negro” invoked not the name of his mother or Jesus, but a different higher power of his choice. Now, Colin Kaepernick is no Joe Louis. Or Jackie Robinson. Or Bill Russell. But he is the hero we didn’t know anybody wanted. It’s complicated, I know.

Ellen McGirt is a senior editor for Fortune.