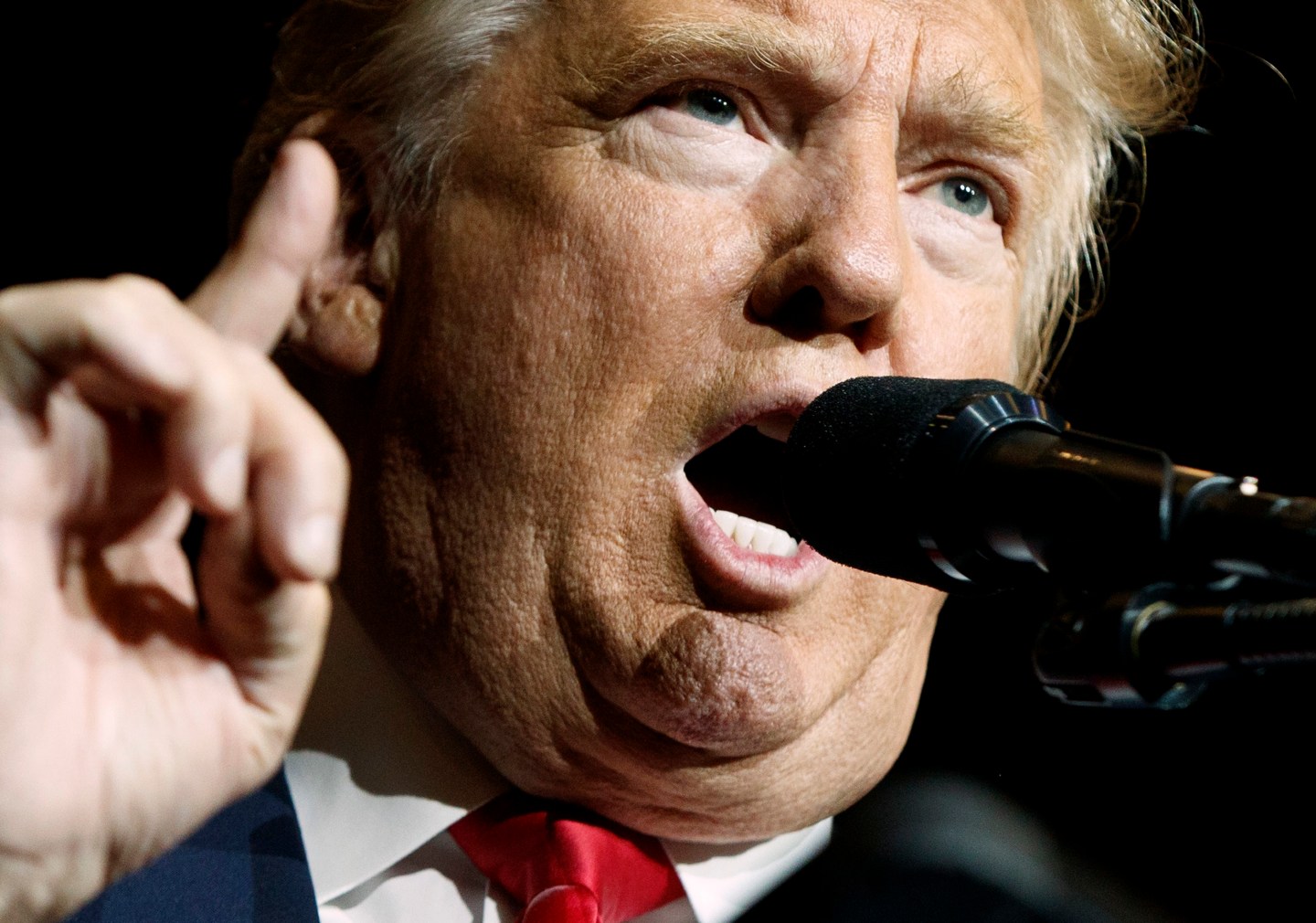 Donald Trump, his campaign buckling under a barrage of new sexual assault allegations, is lashing out as only Donald Trump can. At a midday rally in West Palm Beach on Thursday, the Republican presidential nominee attacked his accusers as pawns in a global conspiracy to derail his candidacy.

Going full-tilt demagogue, Trump invoked the specter of corrupt corporate interests working in league to sink him so they can continue to plunder the American working class. Voters, he said, have one last chance to turn the tide, describing the election on Nov. 8 as a “crossroads in the history of our civilization that will determine whether or not ‘We the People’ reclaim control of our government.”

The “Clinton machine,” Trump said, “is at the center of this power structure,” and he accused Hillary Clinton of meeting “in secret with international banks to plot the destruction of U.S. sovereignty in order to enrich these global financial powers, her special interest friends and her donors.” He described the Clintons as criminals and applauded his crowd for shouting, “Lock her up”—a dark turn from a few months ago, when his campaign discouraged the chant at the Republican national convention.

Trump repeatedly offered himself as the last and only option for those languishing in forgotten corners of the map, frustrated by stagnant wages and slower economic growth. The globalist conspiracy, he said, has “stripped away these towns bare and raided the wealth for themselves and taken our jobs away, out of our country, never to return unless I’m elected president.”

Even in a campaign fueled by Trump’s singular brand of bombast, the Thursday speech crossed a threshold. The address itself was apocalyptic, and Trump appeared irate as he delivered it, periodically stepping away from his microphone to stalk the stage between bursts of invective.

Trump asserted his campaign is rolling toward victory. But in the latest signal of his rapidly vanishing path to the White House, his organization is reportedly pulling out of Virginia. As Clinton pads her national lead, states formerly considered competitive are moving more solidly into her column while others traditionally out of reach for Democrats—including Arizona, Georgia, and Utah—suddenly appear up for grabs.

The Republican nominee on Thursday eventually focused his broadside against the shadowy world order on the more immediate threat to his run—the parade of women emerging with accounts of Trump sexually assaulting them. The accusers have come forward following Trump’s claim Sunday during the second presidential debate that he never acted on his taped 2005 comments, in which he bragged about kissing and groping women without their consent. Trump dismissed the new allegations as “wild and false,” promising to provide “substantial evidence” to dispute them “in an appropriate way at an appropriate time.”

Trump’s speech followed one by Michelle Obama, who directly confronted his 2005 comments and the new accusations about his behavior. “This is not normal,” the First Lady told a New Hampshire crowd, appearing to choke up at times as she talked about the pain of sexual assault. “This is not politics as usual. This is disgraceful. It is intolerable.” And she called dismissing Trump’s vulgar language on the tape as locker room banter “an insult to decent men everywhere.”

It’s tough to conjure a darker or more encompassing vision of the forces aligned against Trump than the one he summoned for his Thursday rant. But the candidate has also time and again made good on at least one of his defining pledges—to punch back at critics ten times harder than they’ve hit him. Trump is categorically disavowing any allegations he’s behaved inappropriately with women, much less attacked them, while seeking to draw attention to claims that Bill Clinton is guilty of just that sort of criminal behavior. The tack is an open invitation for anyone with a story to come forward, and for the press to go looking for them. And that means, while it’s difficult to imagine, this campaign could be on the verge of getting even uglier.