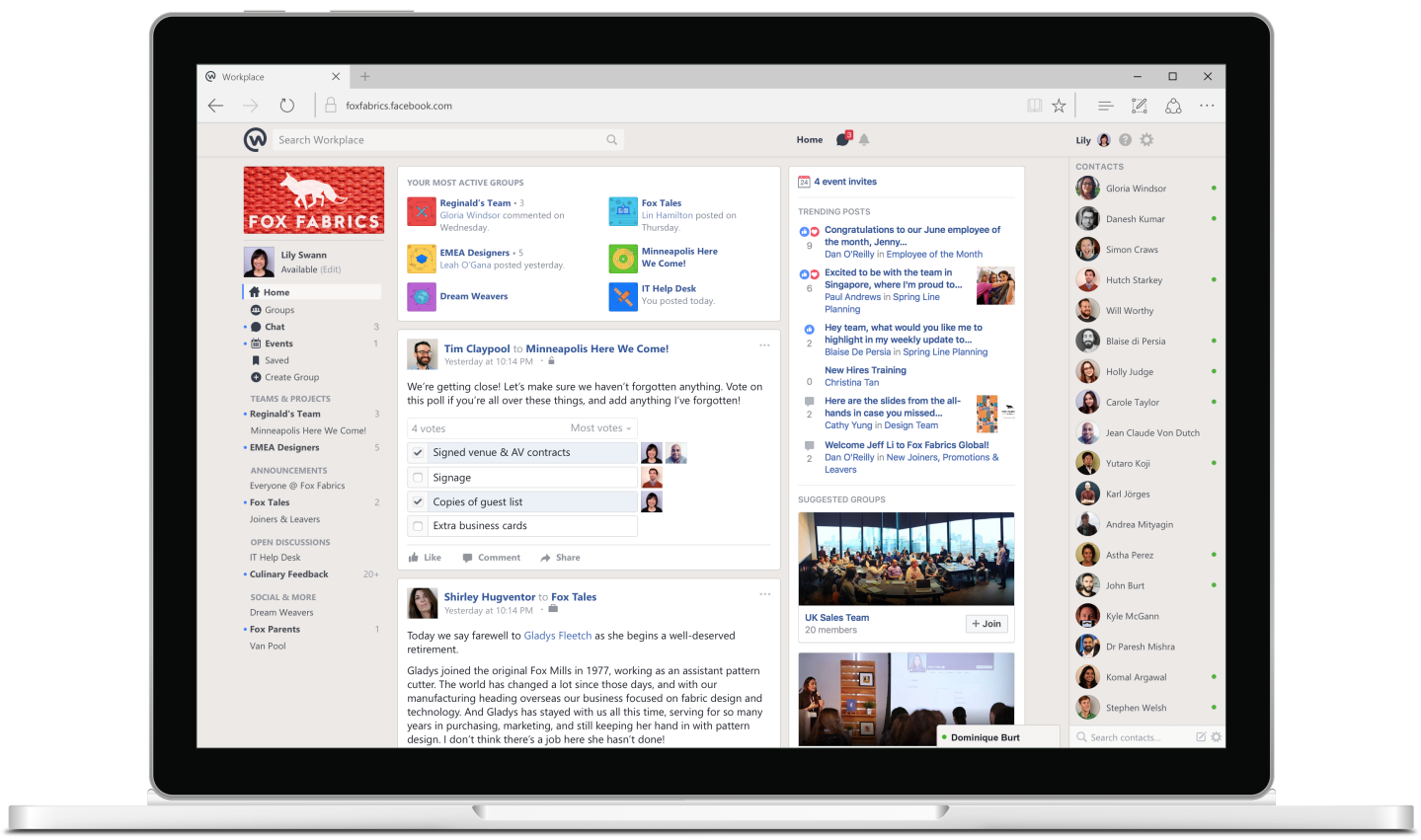 The social network’s much-anticipated business edition—formally dubbed Workplace by Facebook, rather than the Facebook at Work moniker used during its 18-month beta test—has already been adopted by more than 1,000 companies, according to information that Facebook (FB) plans to share Monday evening during the product’s official launch event in London.

That includes some accounts Facebook has trumpeted pretty loudly over the past year, like the Royal Bank of Scotland and Club Med, plus several multinational businesses we haven’t heard about before that are rolling out the service among more than 100,000 employees such as French food giant Danone, and U.S. coffee company Starbucks. One of the regions embracing the service most quickly is India.

For perspective, that adoption rate is more than double the 450 organizations that were part of Facebook’s not-so-secret beta program just six months ago.

But now, the consumer Internet company needs to convince businesses to become paying customers at a cost of $1 to $3 per user per month—a price that varies depending on the number of workers who are actually “active” on the service within an organization. Facebook will give companies a three-month free trial of the service to convince managers that investment is worthwhile, says Julien Codorniou, director of Workplace by Facebook.

What’s more, Facebook has tapped at least a dozen systems integrators and technology consulting companies, including Deloitte, to spread the word about Workplace and help companies get the software up and running.

“The one thing that I really think Facebook has going for them is that the feature set is proven to work on mobile devices really well and proven to work for people without training,” says Josh Bersin, principal and founder of Bersin by Deloitte, which advises companies on corporate learning strategies. He adds, “The biggest problem is just connecting people. The paradigm of email is not good at that.”

Workplace by Facebook looks very much like the company’s flagship social network, and that’s by design—the company wants it to be super simple for people to use. Just in case it isn’t clear: the business service is not connected in any way to an employee’s personal Facebook identity. “You get an account when you join the company, you lose the account when you leave the company,” Codorniou tells Fortune.

There is a News Feed that displays articles, updates or comments relevant to certain teams or, perhaps, to the entire company. The now-familiar Live service can be used to broadcast corporate communications, such as a presentation by the CEO. Workers can communicate in real time using a version of Messenger. They can also create private Groups for brainstorms or discussions—as of this week, groups can include colleagues or business partners that aren’t official employees. That feature wasn’t previously available until today’s launch.

“No company is an island, everyone has a partner, vendor, agencies to work with,” Codorniou says.

Workplace by Facebook started life as the internal system used by Facebook employees to share information relevant to their projects more efficiently. “Part of the future of work is that people have the expectation that there will be open communication across the organization, and this is a great way to deliver on that,” explains Lori Goler, Facebook’s vice president of global human resources.

As of June 2016, Facebook had about 14,500 employees, all of whom use Workplace as the primary method communicating with teams and sharing knowledge. When asked about the other “tools” Facebook uses internally, Goler points to Quip—the document creation and collaboration service created by Facebook’s former chief scientist Bret Taylor and recently acquired by Salesforce.com. (Facebook still relies on email for external communications, such as the exchange of messages that brokered the interviews for this story.)

One of Workplace by Facebook’s core differentiators is the fact that it works well on smartphones and other mobile devices. At Danone, for example, the service will reach 30,000 factory workers who don’t have desks or personal computers. In theory, it could enable a two-way conversation between an intern and the CEO—connections that have nothing to do with an org chart, says Nicola Mendelsohn, vice president for Facebook in Europe. “It is a voice for everybody in an organization, which is especially important if you want to make decisions quickly.”

So far, Workplace for Facebook’s support for widely distributed teams is proving particularly compelling for big banks and retailers supporting dozens if not hundreds of satellite branches and offices, Codorniou said. The Yoma Bank in Myanmar, for example, will use Workplace by Facebook to replace fax machines and newsletters.

For more about Facebook’s attempt at a Craigslist-killer, watch:

The email “problem” is well-documented, and a survey conducted by Deloitte in September underscores just how disillusioned businesses have become: only 15% of the roughly 250 C-suite executives who responded said they were satisfied with their company’s current collaboration and communication options. There are dozens of software companies seeking to capitalize on that.

Three that sell full-blown systems like Workpace by Facebook that use employee directories to create enterprise “social networks” are IBM (IBM), Jive Software (JIVE), and Lithium Technologies. A second class of services from the likes of Microsoft (MSFT), Salesforce.com (CRM), and SAP (SAP) add messaging and conferencing features to existing business management applications.

Facebook will also contend with well-funded startups such as Slack, which had more than three million active users on its business messaging system as of mid-July. In late September, Slack announced a partnership with Salesforce intended to boost its credibility with more big companies.