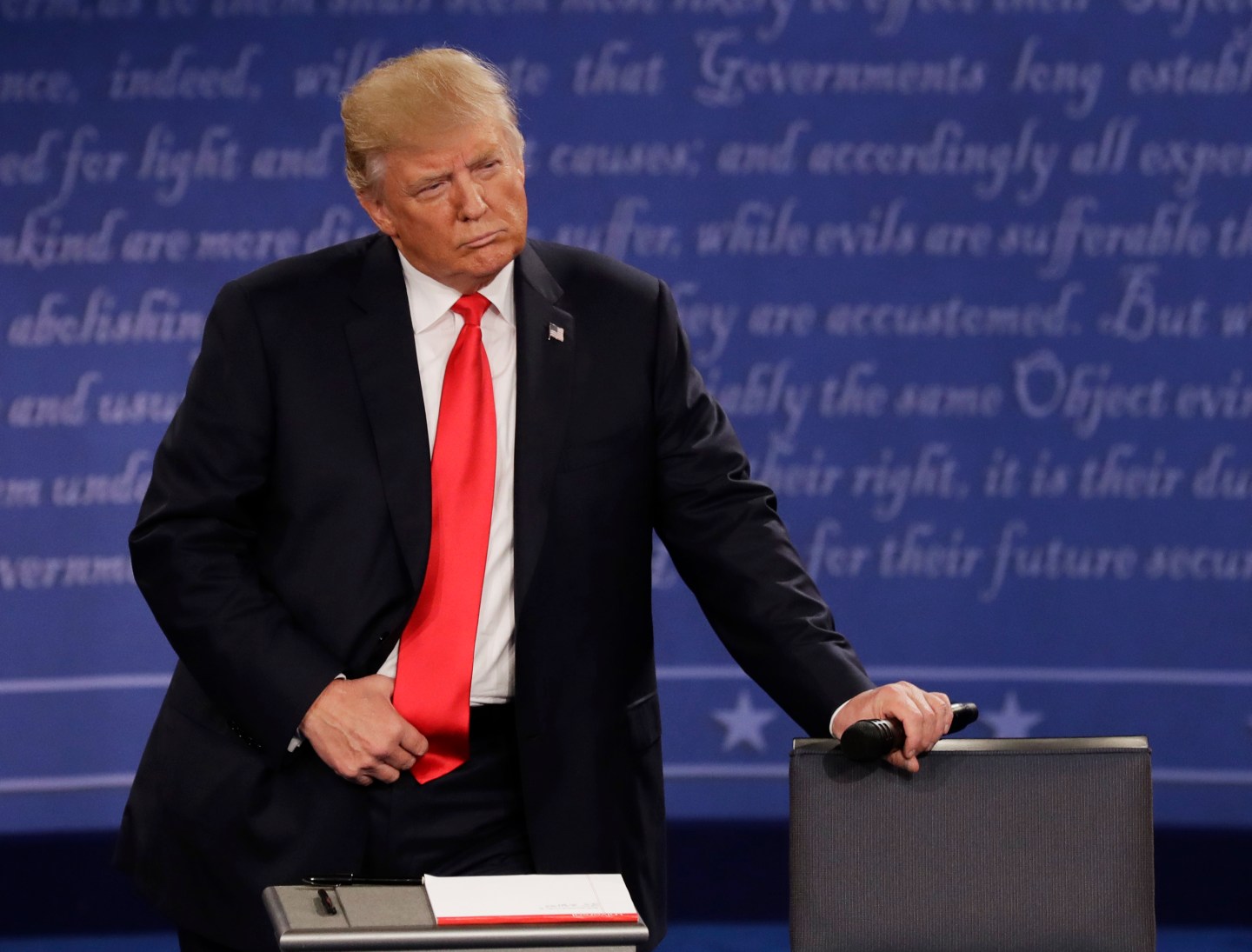 Trump trashed Obamacare, the president’s signature domestic policy achievement and a favorite piñata for Republicans, as a “total disaster.” He predicted that in 2017, it “implodes by itself.” Hillary Clinton, his Democratic opponent, praised the law for bringing the share of insured Americans up to a record-high 90% while emphasizing it could still be improved with fixes to reduce customers’ costs–an argument that her husband, former President Bill Clinton, also recently made. (You can read a full transcript of last night’s town-hall debate here.)

A number of high-profile insurers such as UnitedHealth (UNH) and Aetna (AET) recently have substantially rolled back their participation in the state markets, too, citing losses in their individual insurance businesses and a risk pool that is sicker and using more medical care than expected.

But is Obamacare in as disastrous shape as Trump asserted? Below we consider a few of Trump’s major claims—and what’s actually going on with Obamacare.

Trump Claim: Premiums are “going up at numbers that nobody’s ever seen worldwide”

Fact: Average rate hike is about 25%, but most people aren’t paying full premiums.

Trump is correct that premiums for Obamacare plans are set to rise substantially, although the percentages he cited (without clarifying which states, locales, or insurers he was referring to) are not typical. The average requested rate hike for 2017 policies is actually about 25%, and so far, those requests have largely been approved, according to Charles Gaba of the Obamacare tracking site ACASignups.net.

The vast majority of people also aren’t paying the full premiums. Anybody who earns between 100% and 400% of the Federal Poverty Level (FPL) qualifies for sliding scale subsidies that can drastically slash their monthly payments; those who make between 100% and 250% FPL and choose a mid-level “Silver” plan receive additional assistance in paying out-of-pocket costs such as deductibles. (The 2016 poverty line is $11,880 for an individual and $24,300 for a family of four.)

In fact, 85% of ACA enrollees qualify for and receive these tax credits, according to government data, and the subsidies cover about 75% of monthly premium costs on average. Furthermore, the median deductible for Obamacare customers this year is about $850 after taking cost-sharing subsidies into account.

And the share of people receiving this sort of assistance, which would help shield them from the types of rate increases Trump is referring to, could actually be even larger. That’s because people seeking individual plans can actually buy Obamacare-compliant insurance off of the statewide marketplaces, either directly from insurance companies or through a broker—but those who choose to do this don’t qualify for federal subsidies. About 2.5 million people who have taken the off-marketplace path have incomes that would qualify them for financial assistance, according to a recent government report.

Fact: Research shows most Obamacare customers like their plans.

In 2016, 77% of private Obamacare enrollees were “very” or “somewhat” satisfied with their health insurance, according to a report by the nonprofit Commonwealth Fund. Satisfaction was even higher (88%) among those who newly enrolled in the public Medicaid program for the poor, which most states have expanded under an optional provision of the ACA. Furthermore, 66% and 77% of private Obamacare plan holders and new Medicaid beneficiaries, respectively, classified their coverage as either “good, very good, or excellent.”

These Americans have also been putting their insurance to use. More than 70% of Obamacare and new Medicaid enrollees said they’d used their coverage to cover medical expenses, and 61% of this group said they wouldn’t have been able to afford their care prior to buying coverage.

In comparison, the most recent Employee Benefit Research Institute survey found that 66% of workers were satisfied with their employer-sponsored health plans.

Trump Claim: Obamacare is just the “first step” towards “single payer, which means the government basically rules everything”

One of Trump’s more striking claims during the debate alleged that Clinton essentially wants socialized medicine.

Fact: Hillary Clinton has not endorsed full, single payer health care at any point during this campaign, although she has praised Medicare, the government health program for elderly Americans, as effective. She also has argued that Medicare should be able to directly negotiate drug prices to counteract pharma company price hikes, and endorsed a public option to compete with private insurance plans in Obamacare marketplaces.

But ultimately, Obamacare would be a strange vehicle to facilitate single payer, given that the system is predicated on inducing competition between private insurers. It’s true that some states could seek government permission to test out their own unique insurance models under the ACA. Vermont did just that in 2011 when its legislature voted to establish the first statewide single payer system in the U.S. But Governor Peter Shumlin eventually abandoned those plans in 2014 in the wake of political and financial concerns.