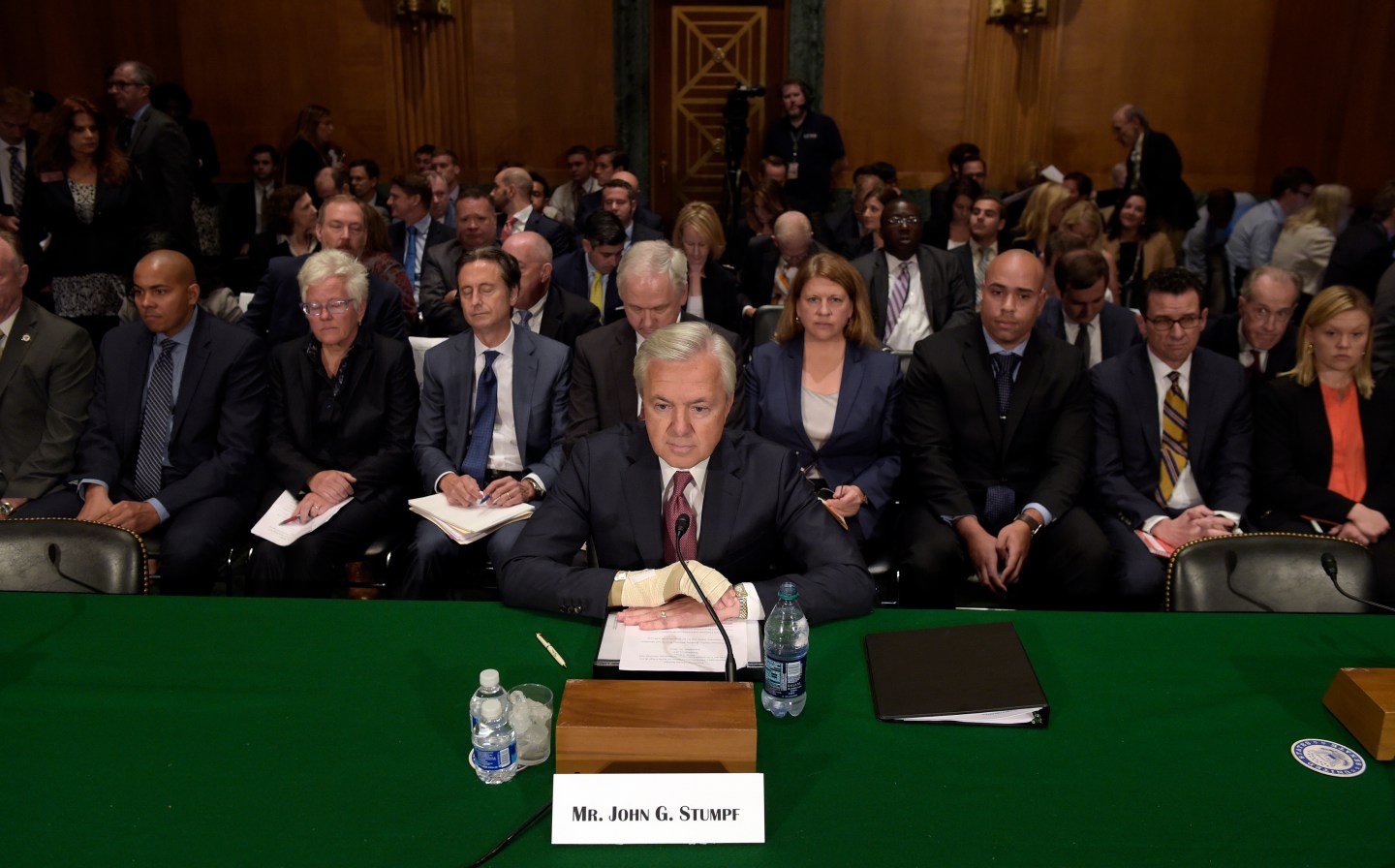 Wells Fargo‘s Chief Executive John Stumpf returns to Capitol Hill on Thursday with his job still under threat and the bank facing rising political pressure over a sales scandal that has become a major issue in Washington and on Wall Street.

The bank’s move earlier this week to claw back $41 million in stock awarded to Stumpf, an unprecedented rebuke for a major U.S. bank CEO, is unlikely to silence calls for him to resign over revelations Wells Fargo‘s branch staff opened as many as two million unauthorized credit card and deposit accounts to meet sales quotas.

The scandal has triggered lawsuits, investigations and wiped more than $20 billion off the bank’s market value.

California, Wells Fargo‘s (WFC) home state, suspended business relationships with the bank for a year on Wednesday and said it would work with the state’s two giant public pension funds to change the management structure at the bank, including separating the roles of CEO and chairman.

The episode has been a stunning reversal for Stumpf, long regarded as a safe pair of hands in the industry for navigating Wells Fargo successfully through the financial crisis.

“I don’t know that he will survive this. I don’t think there’s any way to come out of this with the same leadership,” said Patricia Lenkov, CEO of Agility Executive Search.

Stumpf will appear before the House Financial Services Committee, his second congressional appearance in under 10 days.

Thursday’s hearing may be softer on Stumpf than the bipartisan tongue-lashing he took from the Senate Banking Committee on Sept. 20, in which Massachusetts Senator Elizabeth Warren called him a “gutless leader” who should be criminally investigated.

Warren said on Wednesday that Wells Fargo‘s decision to launch an internal investigation and claw back bonuses paid to Stumpf and Carrie Tolstedt, the former head of the retail division at the center of the scandal, were “important first steps,” but still insufficient.

“The reduced compensation represents only a fraction of the total pay and bonuses received by Mr. Stumpf and Ms. Tolstedt during the years that their compensation was based in part on inflated retail account growth and cross-selling success,” she wrote in a letter to Wells Fargo‘s board of directors.

Andrew Duberstein at public relations firm Sard Verbinnen, which is representing the board, did not respond to requests for comment on the letter.

Stumpf will tell lawmakers on Thursday that Wells Fargo will eliminate sales quotas for branch staff from Oct. 1, accelerating a previous plan to halt the practice by Jan. 1, according to prepared testimony he will deliver.

Federal regulators will also be in focus at the hearing.

Since the scandal broke, Texas Republican and chairman of the House Financial Services Committee Jeb Hensarling has asked why they did not act sooner and he is expected to raise that point again.

U.S. Federal Reserve Chair Janet Yellen promised the committee on Wednesday that the central bank will scrutinize all big banks in the wake of the Wells Fargo scandal. Some Democratic committee members said it showed that some banks are too big to manage and should be broken up.

The most powerful Democrat on the committee, Representative Maxine Waters of California, said she had not reached that conclusion, and wanted to hear Stumpf’s answers first. She declined to say whether steps taken by Wells Fargo, including the $41 million clawback, were sufficient.

“We will ask some of the basic questions about how this fraud took place and why did it happen and whose decision it was,” she said.