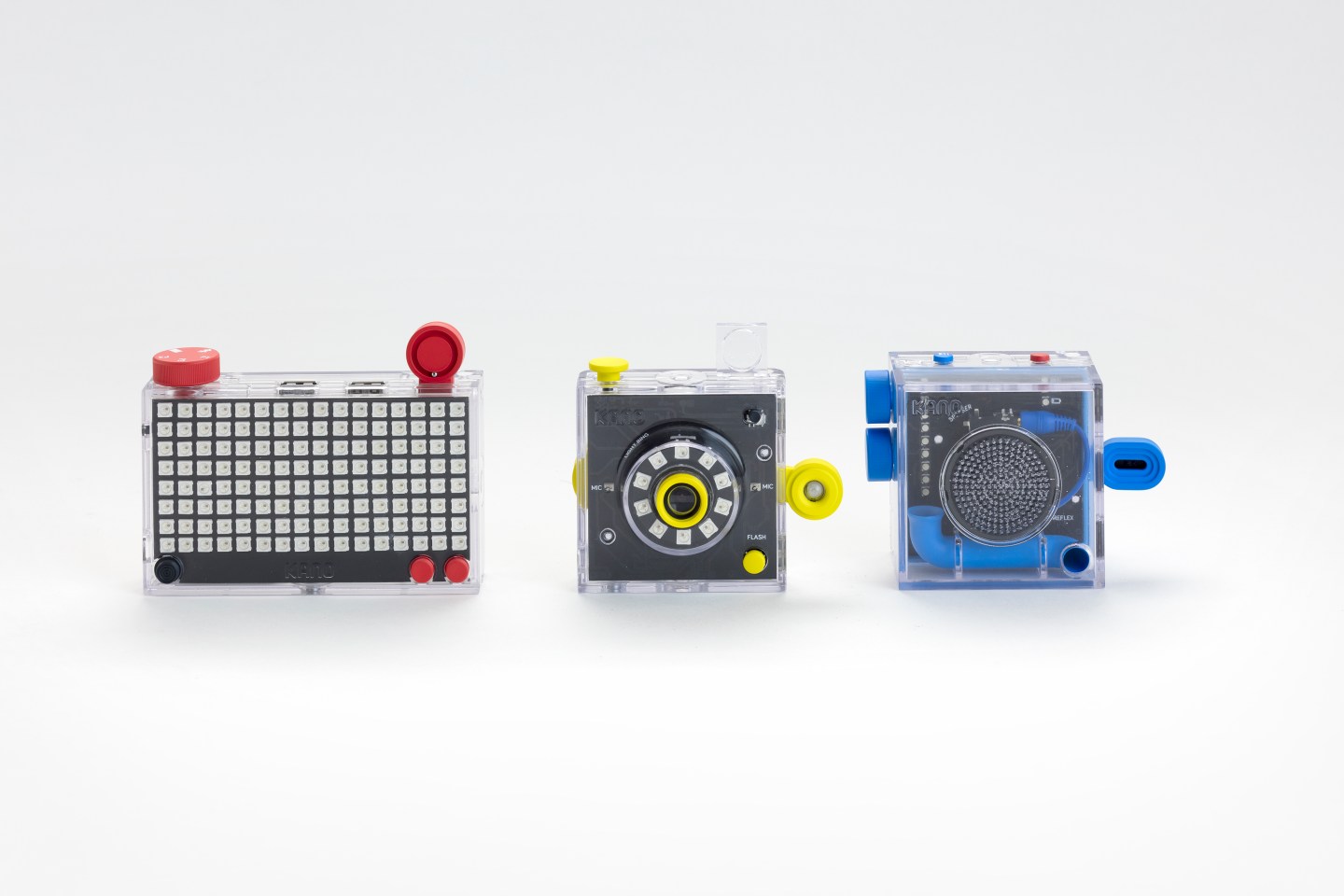 For many children, their first encyclopedia is their first taste of the natural world and science. Their first short novels are an introduction to storytelling, and their first coloring books are a door into discovering art. But what about computers and technology?

Kano, a three-year-old company based in London, wants its computer kits to play that role. On Tuesday, the company whose first two kits were a basic computer with a keyboard and a kit for assembling a screen, unveiled three new ones: a camera, a speaker, and a pixel player, whose small LED lights can be programmed to display various patterns. The new kits will first be available for pre-order through Kickstarter, the crowdfunding service through which Kano raised funding for its initial computer kit, and will begin to ship to customers next year. Kano plans to sell each kit for $130.

As with the screen kit, the company’s second product after it released its original computer, Kano took cues from its users when designing its latest kits, co-founder and CEO Alex Klein told Fortune. For a long time, personal computers were the main form of computing the average person encounters, but these days that’s no longer the case. Today, people interact with computers in the form of mobile devices, home automation devices, cameras, and more.

“That realm shouldn’t be invisible,” said Klein of Kano’s news kits, which it hopes will teach customers how sensors, for example, can work.

Klein first got the idea after his young cousin told him he was interested in learning to build his own computer, but nothing he could find made it simple yet fun enough. So Klein, a former journalist, set out to build such a kit using a Raspberry Pi—a small computer that fits on a credit card-size board. Each kit comes with all the hardware pieces necessary to assemble it, as well as a booklet with instructions.

“When we started, what we wanted to demystify was the computer,” said Klein. “There needs to be a new age of computing that isn’t just click, tap, swipe,” he added of today’s mobile devices, which are now often the first computer many kids encounter.

Over the last several years, a growing movement in the U.S. has pushed for making computer science and programming more widely available to students as technology jobs continue to be some of the best paid. Kano’s team, of course, agrees, though Klein says that it’s been careful not to overly simplify the programming software that comes with its kits. Moreover, Kano doesn’t want kids to only learn to program—they should also learn how computers themselves work.

Klein draws inspiration from his own childhood as well. At the age of nine, he moved with his family from London to Seattle, where he was surrounded at school by the kids whose parents worked at Microsoft. Wanting to be different from classmates (as nine-year-olds do), Klein gravitated toward Apple’s iMac computers, and spent a great deal of his time at his school’s computer lab.

“I want the nine-year-old who first awakens to a computing […] I want them to find that on Kano, the same way I found that with those beautiful translucent iMacs, surrounded by Microsofties,” said Klein in a reference to a common name for Microsoft employees. (In a twist, Apple co-founder Steve Wozniak backed Kano’s original Kickstarter campaign for its computer kit.)

In addition to its hardware products, Kano also provides tons of programming projects and resources online that let kids learn to build simple games, for example.

Of course, Kano still has a ways to go. For one, its computer kit costs $150—not exactly an accessible price for all parents and kids. It also has some competition, including littleBits and Makey Makey, among others.

Over the next few years, Klein hopes the price of the Kano kits will drop, and that the company will grow its presence in China and India. To date, Kano has raised $19 million in funding.