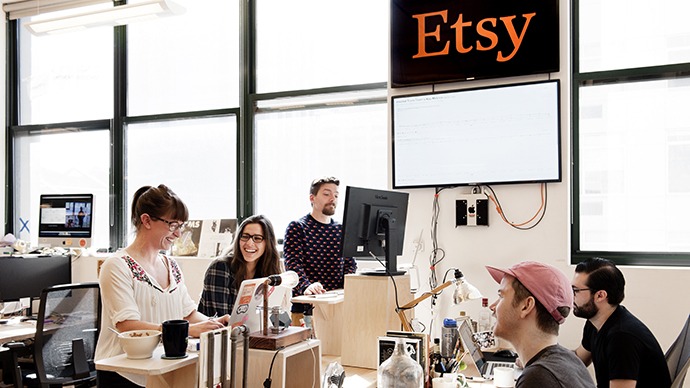 Etsy, an online marketplace best known for cute crafts and other homemade goods, just waded into a very serious debate: How to help the growing numbers of American workers who don’t enjoy the same benefits as many full-time employees.

On Tuesday, the company published a white paper calling for changes to how the so-called “gig economy” operates, including the creation of a new “Flex Portal” run by the federal government. The changes would make it easier for millions of workers—including the thousands of people who sell things on Etsy—to avail themselves of existing programs like flexible health and commuter spending accounts.

Yes, the idea is kind of wonky, but it’s not too hard to get your head around the plan.

The potential upside is that more gig economy workers would participate in benefit programs because there would be less administrative headache. Also, as Etsy notes in the paper, behavioral economics shows that people are more likely to participate in savings schemes when money is deducted right from a payment, rather than funding after the fact.

Also, the creation of an all-in-one Flex Account run by the government means a worker would not have to move accounts every time they worked for someone new. Here are screenshots from the paper, based on recent economics and social science research, of what such an account might look like:

Meanwhile, companies like Uber and and home cleaning service Handy, which are under growing scrutiny for their impact on the labor market, have been floating the idea of a “third way” to provide benefits to workers who are not employees or traditional contractors.

But according to Althea Erickson, Etsy’s Senior Director of Advocacy and Public Policy, the existing ideas aren’t broad enough.

“The discussion of the gig-economy has been on the service-economy. Our sellers face the same sort of challenges but proposed solutions are often irrelevant to them,” she said, adding that Etsy’s proposals would not replace the current benefit system, but augment it.

Erickson also claims it wouldn’t be a major imposition for companies to withhold taxes and direct contributions to a government account, especially in light of new software products that streamline these sort of processes.

Will Etsy’s plan go anywhere? This week, the company is meeting with lawmakers in Washington, D.C. along with a number of Etsy sellers to drum up support for the plan. But Erickson stressed that the white paper is intended to be just a jumping-off point for an ongoing discussion of bringing benefits to gig economy workers.