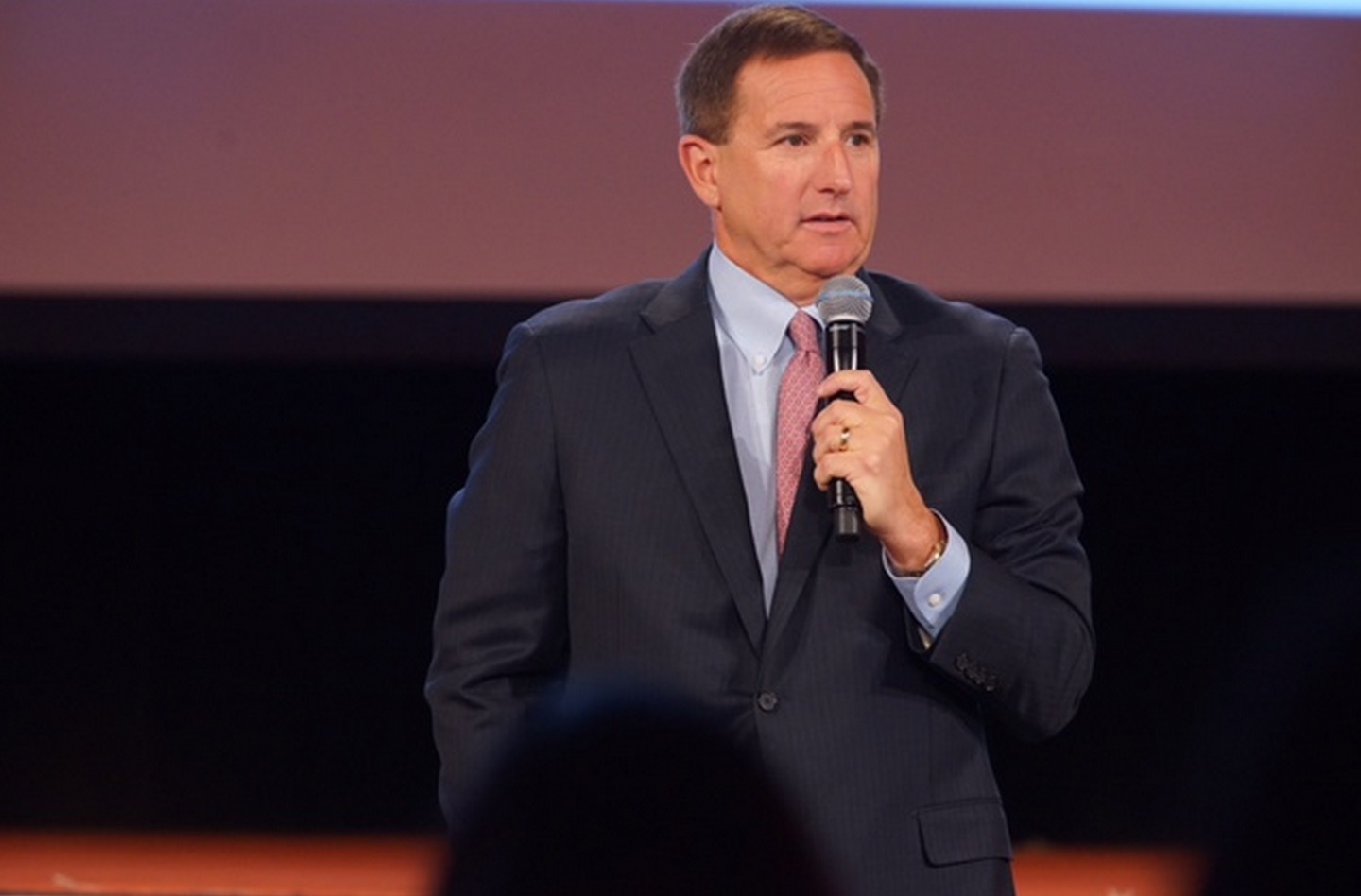 Oracle CEO Mark Hurd laid out the case on Monday for why the database giant sees big money in cloud computing.

Hurd gave his talk while sitting behind a desk in front of a backdrop that resembled a set of a late night talk show, complete with a cup of pencils on his desk and several coffee mugs. He proceeded to outline the current state of information technology, remarking that businesses are spending almost nothing on IT compared to previous years.

However, Hurd said that the largest cloud providers, which he cited includes Amazon (AMZN) and Oracle, are growing 44% each year.

Many technology analysts say that Amazon is well ahead of other top cloud computing providers like Microsoft (MSFT), Google (GOOG), and IBM (IBM) in terms of both annual revenue and the amount of customer data it holds in its many data centers.

Hurd, who shares the CEO position at Oracle with Safra Catz, reiterated that Oracle’s cloud business grew 82% year-over-year in its most recent quarter to roughly $800 million. Still, that figure only takes in account the business of selling software services and tools to help companies build cloud-based apps, otherwise known as Software-as-a-Service and Platform-as-a-Service respectively.

In the business category known as Infrastructure-as-a-Service—in which companies sell computing capacity—Oracle is still far behind market leader Amazon. Oracle’s IaaS business brought in just $171 million in sales in its most recent quarter, while Amazon landed a whopping $2.89 billion in sales for its latest quarter.

Hurd predicted that by 2025, 80% of corporate data centers will be gone, meaning companies are moving their IT infrastructures to data centers provided by cloud-focused companies. Within nine years, Hurd projected 80% of IT budgets will be spent on cloud service—not traditional IT systems that can only be used in a company’s internal data center.

Oracle clearly feels this pressure of companies moving to cloud services and is trying to drum up any momentum it can to its own cloud services to offset the declines of its core business of selling software licenses and databases. In a press briefing after his talk, Hurd said Oracle has been spending the past several years rewiring almost all of its existing legacy software so that there are cloud versions available on subscription basis. This subscription model of purchasing software is similar to Oracle rival Salesforce (CRM).

In Oracle’s fiscal 2016, Hurd cited Oracle spent $5.1 billion in research and development to improve its cloud services, although he did not detail how exactly the money was spent. Hurd declined to comment on how much money Oracle will spend on building new data centers or how many new facilities it needs to compete with cloud computing giants like Amazon and Microsoft. RBC Capital Markets recently estimated Amazon will spend $11.8 billion in 2016.

Hurd said Oracle will dedicate more resources and money to its IaaS business, but first it had to spend a lot of cash making sure its legacy software were cloud compatible and better suited to changing customer purchasing habits.

“You will see more investment into infrastructure, but it’s riding behind the wake of the existing commitments,” Hurd said. He also stressed Oracle’s 19 data centers gives the company “the scale in many capabilities to compete with Amazon,” but he did not reveal what those specific capabilities were.

Regarding Oracle’s massive $9.3 billion proposed buyout of financial services software company NetSuite during its annual conference, the company said surprisingly little thus far. Hurd said that Oracle has “cleared the transaction with all of the international regulatory groups,” but still needs approval from the U.S. government.

“If that is successful, we will be extremely vocal about all of the exciting things about NetSuite,” Hurd said.