Elizabeth Warren Blasts Bankers: You’re Not Too Big to Jail 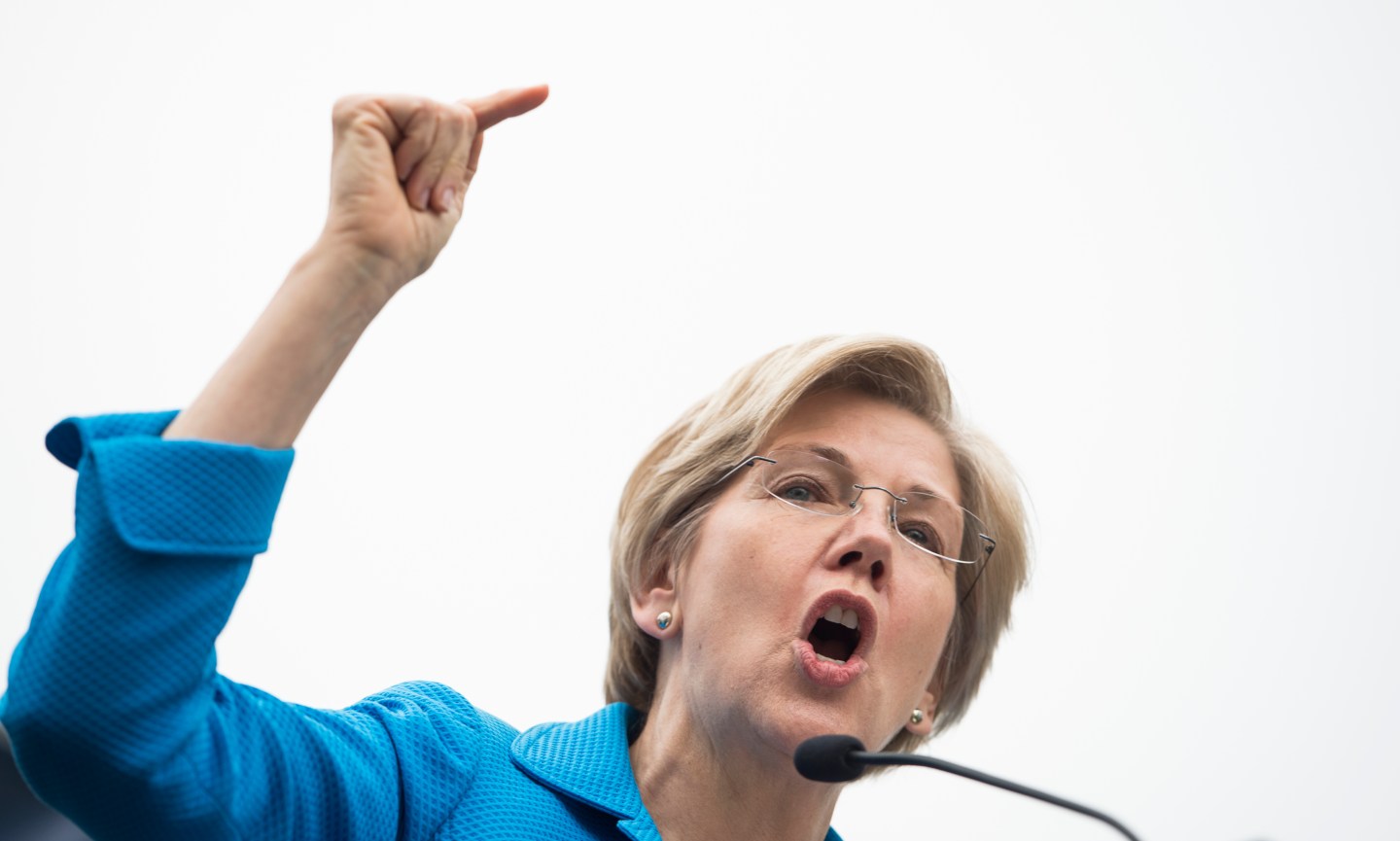 Donald Trump might say. disrespectfully to be sure, Pocahontas is on the warpath.

Candidate Clinton, however, has shown little inclination to endorse Warren’s signature goal of breaking up America’s big banks. But if the Democrats take back the Senate, Warren will gain a powerful platform to a promote a radical revamping of financial services. And Warren will exert immense power in matters of personnel by blocking, or threatening to bar, Wall Street veterans and establishment financial officials from leading the new president’s economic team.

Warren’s mid-September onslaught came in two parts. The first was her fiery critique of Wells Fargo (WFC) over the notorious consumer-bilking scandal. The second was a takedown of the Department of Justice for failing to prosecute the banks and individuals who caused the financial crisis, dramatically unleashed on the eighth anniversary of Lehman Brothers’ bankruptcy.

Appearing on both CNN and CNBC, Warren bashed Wells Fargo’s brass for the high-pressure sales culture that spurred employees in its branch network to create 1.5 million checking accounts, and issue almost 600,000 credit cards, to customers who didn’t want them. The Consumer Financial Protection Bureau, an agency Warren helped create, and once headed, led the investigation that punished Wells Fargo with $185 million in fines. “You cannot have a scandal this size and not have some senior management who are personally responsible,” she declared. Nor did Wells’ firing of 5300 employees responsible for cheating its customers impress her. “All they do is fire low-level employees, you can’t run a bank like that. Let’s have a little personal responsibility, please,” she asserted.

Warren, along with four other Democratic senators on the Banking Committee, also dispatched a letter to Wells’ heretofore highly respected CEO, John Stumpf, in effect demanding that the bank deploy its “clawback” provisions to recover compensation from the senior executives responsible for fleecing customers. Warren aimed specifically at Carrie Toldstedt, the chief of community banking who retired at age 57 in July with a package of $128 million in options and restricted stock. Clawbacks, Warren charged, are meant to punish precisely this kind of wrongdoing, and Wells would betray its shareholders and the public trust if it failed to recoup tens or even hundreds of millions of dollars from Toldstedt and other alleged bad actors, the Senator wrote:

“These clawback provisions are designed to prevent exactly what happened with Ms. Toldstedt: shareholders and consumers bearing the burden of bank misconduct while executives walk away with multi-million dollar rewards [for] fraudulent practices.”

Warren will get a chance to publicly grill John Stump next week. The Senate Banking Committee, of which she’s the most vocal and progressive member, has summoned Stumpf to appear on Sept. 20 at a special hearing examining the phony-accounts scandal. Until now, Stumpf has been the least controversial of the Big Four bank CEOs, and won widespread praise for his conservative, “we’re not Wall Street” focus on branch and small-business banking. He’s also so far declined to impose clawbacks, and continues to praise Wells’ tarnished culture. Look for Warren to charge that Stumpf and the top brass are mostly to blame.

On the second front, Warren sent a letter to the Inspector General of the Department of Justice, asserting that the DOJ failed in its duty to prosecute the companies and individuals who triggered the financial crisis. A commission with the acronym FCIC investigated the causes of the meltdown in 2010 and 2011, but it wasn’t until March, when its full records became public, that America learned that the FCIC had “referred” no fewer than 9 individuals and 14 companies to the DOJ for possible prosecution. As it turned out, the authorities didn’t indict a single individual or corporation.

In the letter, Warren denounces the DOJ’s decision to shun all criminal action as a scandal in itself. The 20-page letter details the Commission’s allegations, including:

None of those Wall Street chieftains ever even paid a fine. Warren acknowledges that the U.S. levied $42 billion in penalties on big banks, but typically finds that a pittance in relation to their profits and net worth.

To dig deeper into the DOJ’s reasons for going easy on the alleged wrongdoers, Warren dispatched a letter the same day to James Comey, asking the FBI Director to release all interviews and other materials “related to the FBI’s investigations and prosecutorial decisions regarding these referrals” to the DOJ. It’s interesting that Warren stated that the highly unusual public disclosure of such information is justified because of a recent precedent: the release of records about Hillary Clinton’s email system. If the email release was justified by “intense public interest,” as the FBI stated, then according to Warren, the same standard applies to its investigation of the financial crisis.

The @FBI released @HillaryClinton’s info citing “intense public interest.” It should do the same for its Wall Street FCIC investigations.

Building a Different Kind of Wall

How much will Warren’s power grow if Clinton is elected? The Senator’s central goal is restoring the Glass-Steagall Act, the law mandating that investment banks that provide C-suite advice and trade securities operate separately from commercial banks that furnish checking accounts and lend money to customers. It was the repeal of Glass-Steagall in 1999 that created today’s giant universal banks and helped create the financial crisis, according to Warren and other observers.

Hillary Clinton, however, has shown little interest in reviving those restrictions. Instead, she’s focused on taming so called “shadow banking,” the un-regulated universe of hedge funds, private equity and even payday lenders who are now providing the often high-risk credit shunned by chartered banks. Clinton is also pushing to exempt community lenders from the heavy regulations of the Dodd-Frank bill, arguing that those rules impose heavy costs and deter lending to middle class customers.

Even so, if the Democrats take the Senate, Warren has an excellent chance of wielding the gavel as chair of the Banking Committee, although its also possible the job could go to fellow-progressive Sherrod Brown (D-OH). In that role, Warren is bound to keep pushing to reinstate Glass-Steagall, or a modern version thereof. She’s unlikely to succeed, first because of lack of support from Clinton, and second, because the House is likely to remain in Republican hands. The chairman of the House Financial Services Committee, Jed Hensarling (R-TX), is a protege of the Senator who orchestrated Glass-Steagall’s demise, Phil Gramm; in fact, Hensarling occupies Gramm’s old House seat from Texas. Although resurrecting Glass-Steagall has the support of some Republicans, notably Senator John McCain (R-AZ), it’s almost inconceivable that a bill could get through Hensarling’s committee.

Under a Clinton presidency, Warren’s position on separating commercial and investment banking would likely only irk the administration, and possibly pit progressives versus mainstream Democrats. Her big influence would come as a gatekeeper in forming the Clinton economic team. Progressives, Warren included, want a kind of litmus test preventing Wall Street veterans from running or joining the Clinton Treasury Department, or occupying other key positions. For example, Tom Nides, a former top aide to Clinton at the State Department, is frequently mentioned as a possible chief-of-staff in a Clinton administration.But Nides now works at Morgan Stanley (MS) as has already been placed on a “blacklist” put together by a loose confederation of progressive organizations, Politico reports.

Meanwhile, a prominent candidate for Treasury Secretary is Larry Fink, CEO of Blackrock. Fink is about as big a Wall Street player as they come as chief of the world’s largest asset manager, based in mid-town Manhattan.

Warren showed her colors by helping kill Obama’s nomination of Antonio Weiss, the former Lazard Ltd. global head of investment banking, in early 2015 as Under Secretary of the Treasury for Domestic Finance. (Shortly thereafter, Weiss joined Treasury in the important position of Counselor to the Secretary, Jack Lew. and has served as the point person on Puerrto Rico’s financial crisis.) her phrase “personnel is policy” has become a mantra among progressives in the run-up to a possible Hillary Clinton Presidency.

Elizabeth Warren is the most prominent voice for radical reform of U.S. banking, and none of it would be good for the JP Morgans and Bank of Americas, nor their investors. But so far, her passionate advocacy isn’t translating into successful legislation. And even under Hillary Clinton, it looks as though those big banks would continue getting lots of verbal abuse, not so much reform.