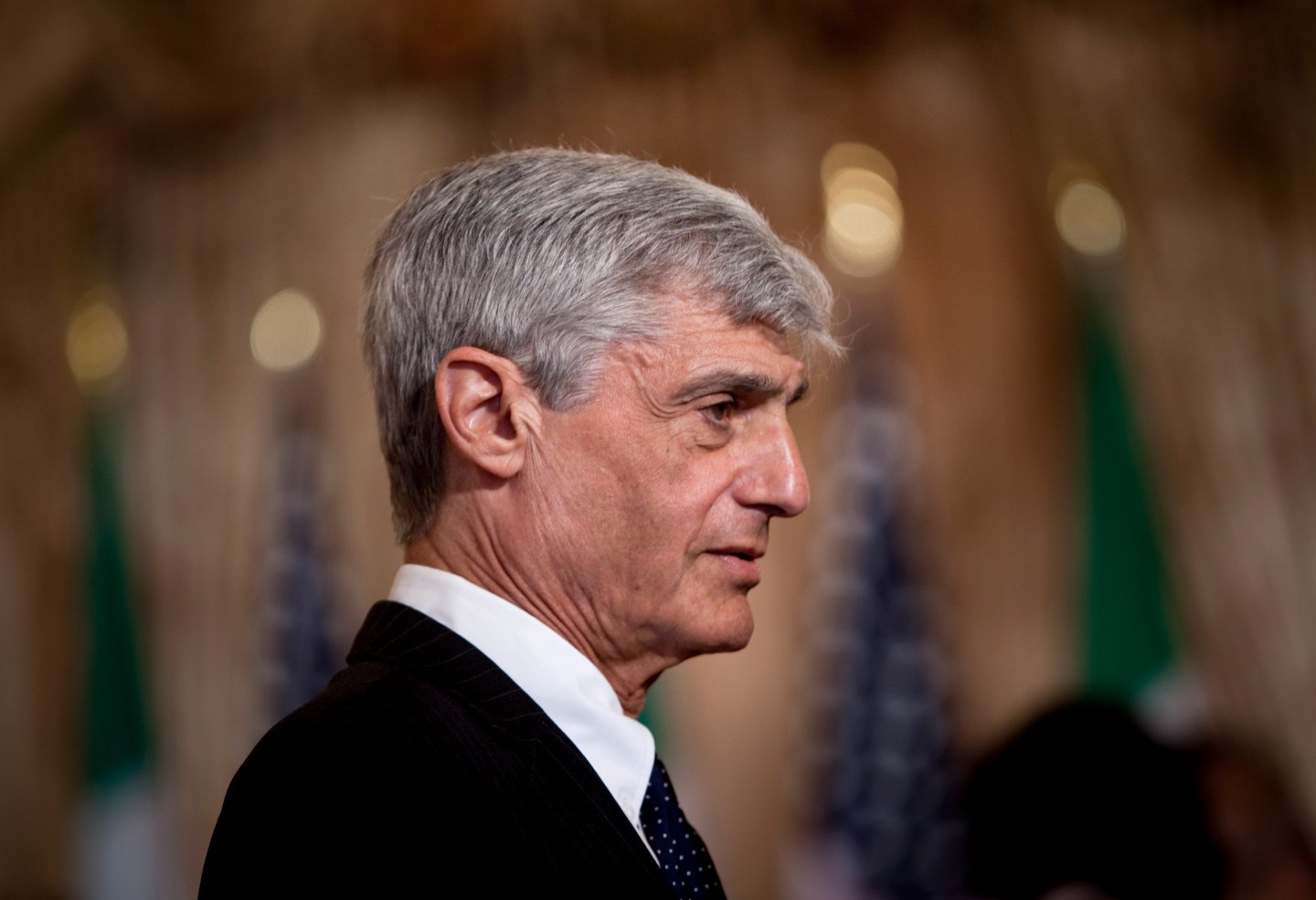 In late 2010, in the waning months of the Financial Crisis Inquiry Commission, the panel responsible for determining who and what caused the financial meltdown that lead to the worst recession in decades voted to refer Robert Rubin to the Department of Justice for investigation. The panel stated it believed Rubin, a former U.S. Treasury Secretary who has held top roles at Goldman Sachs (GS) and later Citigroup (C), “may have violated the laws of the United States in relation to the financial crisis.” Rubin, the commission alleged, along with some other members of Citi’s top management, may have been “culpable” for misleading Citi’s investors and the market by hiding the extent of the bank’s subprime exposure, stating at one point that it was 76% lower than what it actually was.

No government action was ever brought against Rubin. And there is no evidence that Department of Justice acted on the crisis commission’s recommendations. A source close to Rubin says the former Wall Street executive was never contacted by the Justice Department in relation to the commission’s allegations. Nonetheless, the fact that Rubin was among a relatively small group of top bankers who the crisis commission referred to the Justice Department for potential wrong-doing, and the fact that is appears nothing happened, sheds new light on the financial crisis, and the government’s effort to pursue those who may have broken the law.

Seven years after the bankruptcy of Lehman Brothers, the fact that no major Wall Street figure was ever prosecuted for crimes related to the financial crisis remains an sticking point for many. It is regularly brought up by presidential candidate Senator Bernie Sanders. When the Financial Crisis Inquiry Commission released its 662-page report nearly five years ago, members of the commission said they had formerly referred evidence of possible misconduct of a number of individuals to the Department of Justice. But it declined to say who. Brooksley Born, a member of the commission and a former regulator, said at the time, “Our mandate was to refer to the attorney general any individual that our investigation found may have violated US laws. We did make several such referrals, but we are not going to talk about any of those.”

On Friday, the National Archives released a trove of previously unreleased documents from the Financial Crisis Inquiry Commission, including minutes of meetings and transcripts of interviews with a number of key figures in the financial crisis as well as journalists and Warren Buffett. According to the minutes, the commission voted on September 29, 2010, on whether to refer persons related to an item titled “Potential Fraud and False Certifications: Citigroup” to the office of the Attorney General of the United States. The staff notes that describe the item names Rubin, along with then Citi CEO Charles Prince, as having potentially violated the law. At the meeting, the commission’s general counsel Gary Cohen said that what the commissioners were voting on was just a referral and “not a recommendation for prosecution.” The vote was unanimous to refer the Rubin matter among the commission members present at the meeting, 6-to-0.

A spokesman for Rubin says, “We hadn’t heard anything about this and have no knowledge of it.” Fortune reached out but was not able to contact Prince. The Department of Justice declined to comment.

Rubin, 77, after facing some criticism following the financial crisis, has recently settled into his role as an elder statesman of both Wall Street and Washington. (Read Fortune writer Carol Loomis’ 2003 profile of Rubin: Larger than Life) He is co-chairman of the prestigious Council on Foreign Relations. But he’s also become a lightening rod for people who think Washington and Wall Street are too cozy. Two years ago, Senator Elizabeth Warren, when opposing the appointment of a Lazard banker Antonio Weiss to a top position in the Treasury Department, pointed to Rubin as the start of the unholy alliance between financiers and the federal government.

Rubin served as Treasury Secretary under Bill Clinton and he’s widely credited as leading the charge in the Democratic party to embrace the deregulation of Wall Street that many believe led to the financial crisis. He helped pass Gramm-Leach-Billey, which replaced Glass-Steagall and removed the prohibition that kept investment banks from merging with commercial banks. Shortly, there after, in 1999, he left Washington for a top job at Citi, which was one of the megabanks, later deemed “too big to fail,” that Gramm-Leach-Billey made possible. Blooomberg Businessweek later calculated that Rubin made $126 million in his nearly 10 years at the firm.

In the run up to the financial crisis, Citigroup aggressively expanded into the mortgage market and subprime lending. Despite warnings that a bubble was forming in housing and that lending standards had gotten to loose, CEO Prince in mid-2007 famously told the Financial Times that as long as the music is still going he would keep dancing. Rubin at the time was the chairman of the executive committee of Citi’s board. Rubin reportedly blessed the increased risk taking at Citi in the mid-2000s.

By late summer 2007, Citi’s direct exposure to subprime bonds was $55 billion, according to the crisis commission. The staff notes of the commission say that “based on FCIC interviews and documents obtained during our investigation, it is clear that CEO Chuck Prince and Robert Rubin . . . knew this information.” It says the two top officials were made aware of the extent of Citi’s exposure “no later than September 9, 2007.”

Yet, according to the commission, on October 15, Citi executives told analysts on a call that the bank’s total exposure to subprime was just $13 billion, or 76% less than it actually was. Two weeks later as pressure began to build on Citi, and values in the mortgage market fell, Citi told the market that its actual subprime exposure was $55 billion, and that its losses from mortgage-related assets could already be as big as $11 billion. Prince also announced he was resigning.

The staff notes say that “the representations made in the October 15, 2007 analysts call appear to have violated SEC Rule 10b-5,” and that Prince and Rubin, along with “members of the board” may have been “culpable” for “failing to disclose” the bank’s true subprime exposure.

The commission’s staff noted that the SEC had investigated similar charges against Citi and its executives, but had decided to only charge the bank’s chief financial officer and its head of investor relations. But based on the evidence the crisis commission had uncovered, the staff seemed to think that the SEC had not gone far enough up the chain of command, and that Citi’s top executives might have committed crimes as well. “Indeed, by naming only the CFO and the head of investor relations, the SEC appears to pin blame on those who speak a company’s line, rather than those responsible for writing it,” the crisis commissions legal staff wrote in a memo to the commission.

In a March 2010 interview with the financial crisis commission, a transcript of which was also released on Friday, Rubin said he didn’t remember the events that led up to Prince’s departure in early November 2007. He also said he thought Glass-Steagall was “irrelevant” and that its repeal played no role in causing the financial crisis. Asked about what role he had played during his time in Washington in the deregulation of Wall Street, Rubin said basically none. “First of all, I don’t remember any deregulation at that time,” he told the commission. “If there was deregulation it would have been in the interpretation of Glass-Steagall by the Fed, which of course I would not have been involved in at all. Tell me what you mean, because I don’t think there was any other deregulation.”

Phil Angelides, the former chairman of the Financial Crisis Inquiry Commission, who recently called on the Department of Justice to finally act on his commission’s recommendations said, “It’s been a disappointment to me and others that the Justice Department has not pursued the potential wrongdoing by individuals identified in the matters we referred to them. At the very least, they owe the American people the reassurance that they conducted a thorough investigation of individuals who engaged in misconduct.”

The evidence so far is that they haven’t.