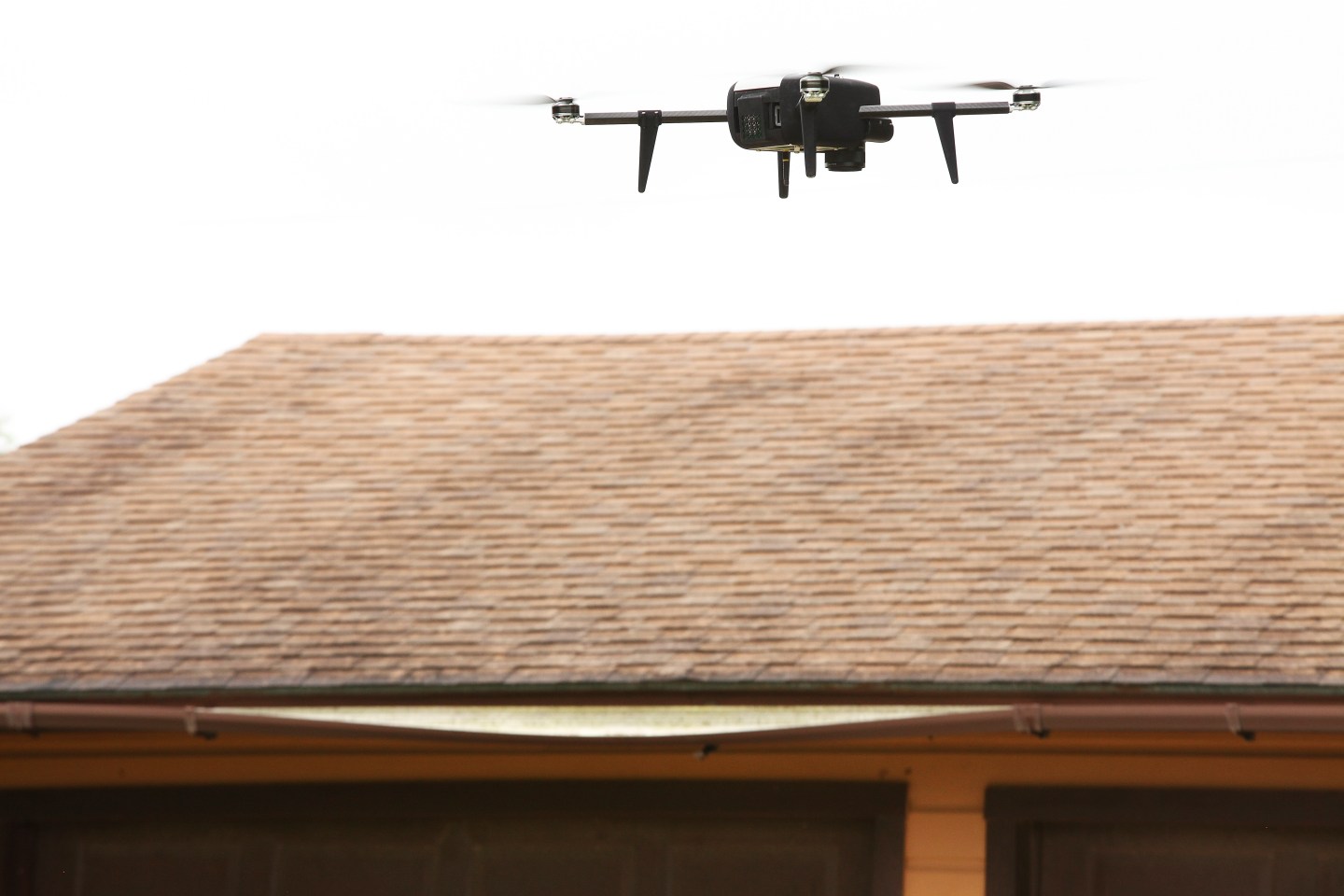 Allstate (ALL) has been testing drones for inspecting roofs for damage for over a year in an effort to more quickly handle customer insurance claims. With the Federal Aviation Administration’s new ruling in place for how businesses can operate drones, the insurance giant plans to expand its test, said Glenn Shapiro, Allstate’s executive vice president of claims.

On Tuesday, Allstate used drones to inspect over 20 home roofs in an area just outside of San Antonio that was hit by intense hailstorms from April to June. These storms were so severe, softball-sized hail caused major damage to many homes, and in some cases those hailstones left holes in roofs that “you could see through,” Shapiro said.

Although the storms were months ago, many residents still haven’t repaired their roofs, partly due to the fact that many repair services are too busy for so many homes, Shapiro said.

Initially, Allstate sent human inspectors who climbed up to roofs to take pictures of the damage the old-fashioned way. But the company decided that it would fly drones over some of the already-inspected roofs to take photos so it could compare the two methods, he said.

Allstate previously used drones to inspect homes in Colorado, but because the new FAA rules were not yet in place, the FAA required the company to have a licensed pilot operating the drone and another person called a “spotter” for observing the test. The new drone rule does not require a licensed pilot, but rather someone who has passed a drone-piloting exam. Drone pilots no longer need others looking over their shoulders, Shapiro explained. As long as a drone weighs less than 55 pounds and is operated with someone with a drone certificate, “you don’t need a separate spotter,” he added.

Allstate used two drone companies, EagleView Technology Corporation and Kespry, to help with the inspections. They provided the drones as well as the related drone software that helps convert the aerial photos into 3D visualizations or other imagery that could help Allstate better understand the storm damage.

The drone companies flew helicopter-like drones called quadcopters outfitted with cameras to hover over the roofs and take pictures. The flights lasted around 10 to 15 minutes each, and were all pre-programmed to fly autonomously without the help of any manual piloting.

Allstate will compare the drone’s photos with those taken by human inspectors, and based on an “eyeball test,” Shapiro seemed confident that the results will be promising enough to continue performing similar drone tests.

“The natural next step is starting to operationalize this,” Shapiro said. “In the next couple of months, we will be doing that.”

Shapiro argued that using drones would let inspectors dedicate more time in the office analyzing the imagery as opposed to having to waste time driving to and visiting each home. He believes using drones will lead to a faster roof-inspection process, be safer for inspectors since they won’t have to climb onto the homes, and will ultimately save Allstate money.

Still, there will be instances in which “a human being has to get close and personal to the shingles” on the roof to perform more in-depth inspections, he said. In these cases, a human’s hands are best suited to manually test the flexibility of the shingles and parts of the roof that may have been impacted.

Going forward, he eventually wants to test fixed-wing drones resembling airplanes that can cruise in the air much faster than quadcopters, which are slower but are good at taking still-shot photos. With fixed-wing drones, Shapiro believes that when a natural disaster strikes, Allstate would be able to quickly dispatch a drone to take pictures of multiple homes in one flight.

However, camera technology installed on fixed-wing drones still must improve a bit before drones will be capable of taking the kinds of photos Allstate wants, Shapiro said. Additionally, these type of drone flights would conflict with current FAA rules that require companies wanting to fly drones beyond the line of sight of human operators to seek special clearance.

Shaprio said that the new FAA drone guidelines “are really responsible” and provides a good framework for flying drones without leading to chaos in the skies.

“We don’t support things getting too loose,” he said.