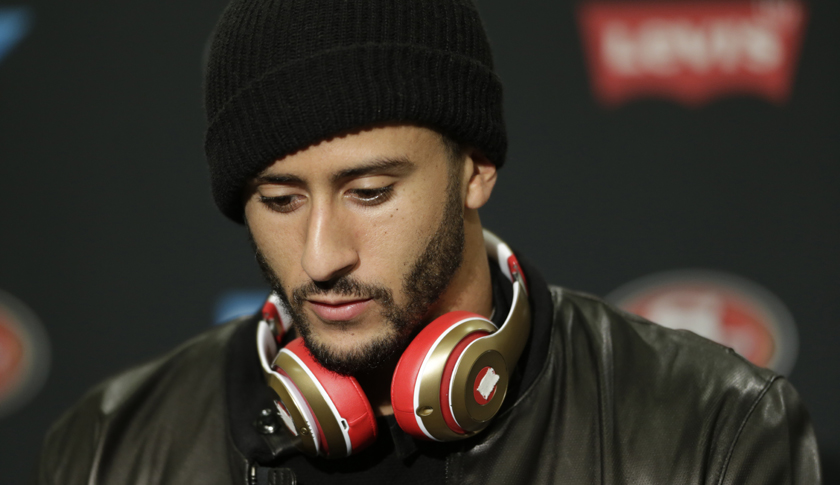 San Francisco 49ers quarterback Colin Kaepernick wears tape over the logo of his Beats by Dre headphones as he talks to reporters after a 17-7 loss to the Seattle Seahawks in an NFL football game, Sunday, Dec. 14, 2014, in Seattle. In October, 2014, Kaepernick was fined $10,000 by the NFL for wearing Beats headphones in a post-game interview. The NFL has an official headphones agreement with Bose. (AP Photo/John Froschauer)
Photograph by John Froschauer — AP

San Francisco 49ers quarterback Colin Kaepernick refused to stand during the national anthem before a game on Friday, protesting the treatment of racial minorities in the U.S.

“I am not going to stand up to show pride in a flag for a country that oppresses Black people and people of color,” Kaepernick, 28, said in an interview with NFL Media after the preseason game. “To me, this is bigger than football and it would be selfish on my part to look the other way. There are bodies in the street and people getting paid leave and getting away with murder.”

Kaepernick said he didn’t inform the team of his plan to protest. In a statement, the 49ers said he had the right to not participate.

“The national anthem is and always will be a special part of the pre-game ceremony,” the statement said. “It is an opportunity to honor our country and reflect on the great liberties we are afforded as its citizens. In respecting such American principles as freedom of religion and freedom of expression, we recognize the right of an individual to choose and participate, or not, in our celebration of the national anthem.”

Milwaukee Violence: Why Is it So Hard to Talk About Race in America?

Kaepernick has refused to stand for the national anthem in at least one game previously, according to ESPN and NFL Media. He is among other high-profile athletes who have used their platform to speak out about racism, civil rights issues and gun violence.

“This is not something that I am going to run by anybody,” Kaepernick said in the interview with NFL Media. “I am not looking for approval. I have to stand up for people that are oppressed. … If they take football away, my endorsements from me, I know that I stood up for what is right.”