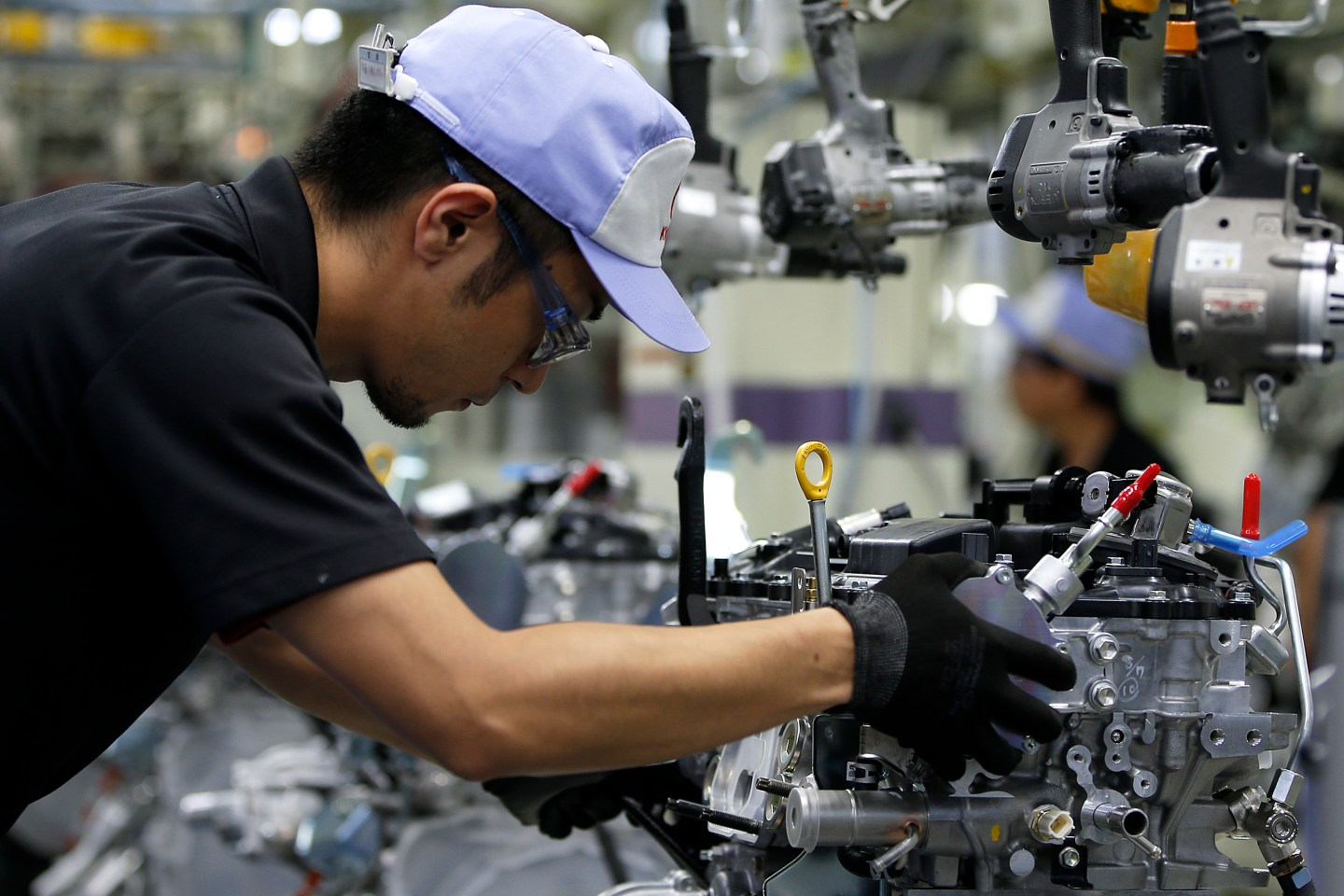 Japanese manufacturers’ mood soured in August to its lowest since 2013 when the central bank embarked on aggressive monetary easing, a Reuters poll showed on Friday, highlighting the weakness in an economy facing declining exports and sluggish consumer spending.

The Reuters Tankan, which tracks the Bank of Japan’s quarterly tankan, came on top of recent data showing exports in July tumbled the most since the last global financial crisis, and that economic growth stalled in April-June.

It underscores the challenge facing Prime Minister Shinzo Abe to boost growth as his recipe of bold monetary stimulus, fiscal spending and structural reforms – dubbed “Abenomics” – has struggled to pull the economy out of deflation and low growth.

See also: Japan’s Exports Sink at Its Fastest Rate Since the Financial Crisis

Illustrating fragility rather than strength in consumer spending, the service sector’s confidence stopped falling for the first time in five months, according to the poll of 533 big and mid-sized firms on August 1-16, of which 275 responded.

The yen’s strength, currently close to a seven-week high of around 100 to the dollar hit exporters’ profits and hurt stock prices, which in turn dampens consumer sentiment. The strong currency drives down the cost of imports and raises the risk of a return to deflation, analysts say.

“The recent indicators confirm that external and domestic demand are both weak,” said Yuichiro Nagai, economist at Barclays Securities. “With the yen’s rise and consumers tightening their belts, companies find it harder to justify raising prices. As such, a complete end to deflation remains out of sight.”

Gross domestic product data on Monday showed private consumption, which constitutes about 60% of the economy, rose just 0.2% quarter-on-quarter in April-June.

Exports fell 14% in the year to July, the fastest decline since October 2009, due to a strong yen and weak external demand.

The yen’s rise appears to have taken a toll on spending by foreign tourists. Such spending had been a rare bright spot for the economy as tourists enjoyed a sharp fall in the yen including an “explosive buying spree” by Chinese in recent years.

“Compared to last year, there has been a shift in what tourists bought,” said a spokesperson at a Mitsukoshi department store. “Last year we saw overwhelming sales of expensive watches by tourists, but this year we have seen a shift toward cosmetics and children’s clothing.”

In the Reuters Tankan, some retailers complained that consumption by inbound tourists was “losing momentum.”

Retailers’ mood bounced in August after crawling at zero for the last two months, but economic uncertainty and sluggish wage growth cloud the outlook for private consumption, prompting consumers to spend less on daily necessities and other goods, analysts say.

The Nikkei CPINow index, designed to capture daily prices based on point-of-sales systems at supermarkets, showed the first annual decline in more than a year on Tuesday.

The data piles pressure on the Bank of Japan to do more in September, when it conducts a comprehensive review of the effects of its stimulus program.

“Declines in prices of goods should be a headache for the BOJ, which has been worried about stagnant service prices,” said Tsutomu Watanabe, economics professor at the University of Tokyo, who supervises compilation of the CPINow.

“Given that weak wages are the root cause of price declines, the BOJ should devise a way to target wages along with prices.”