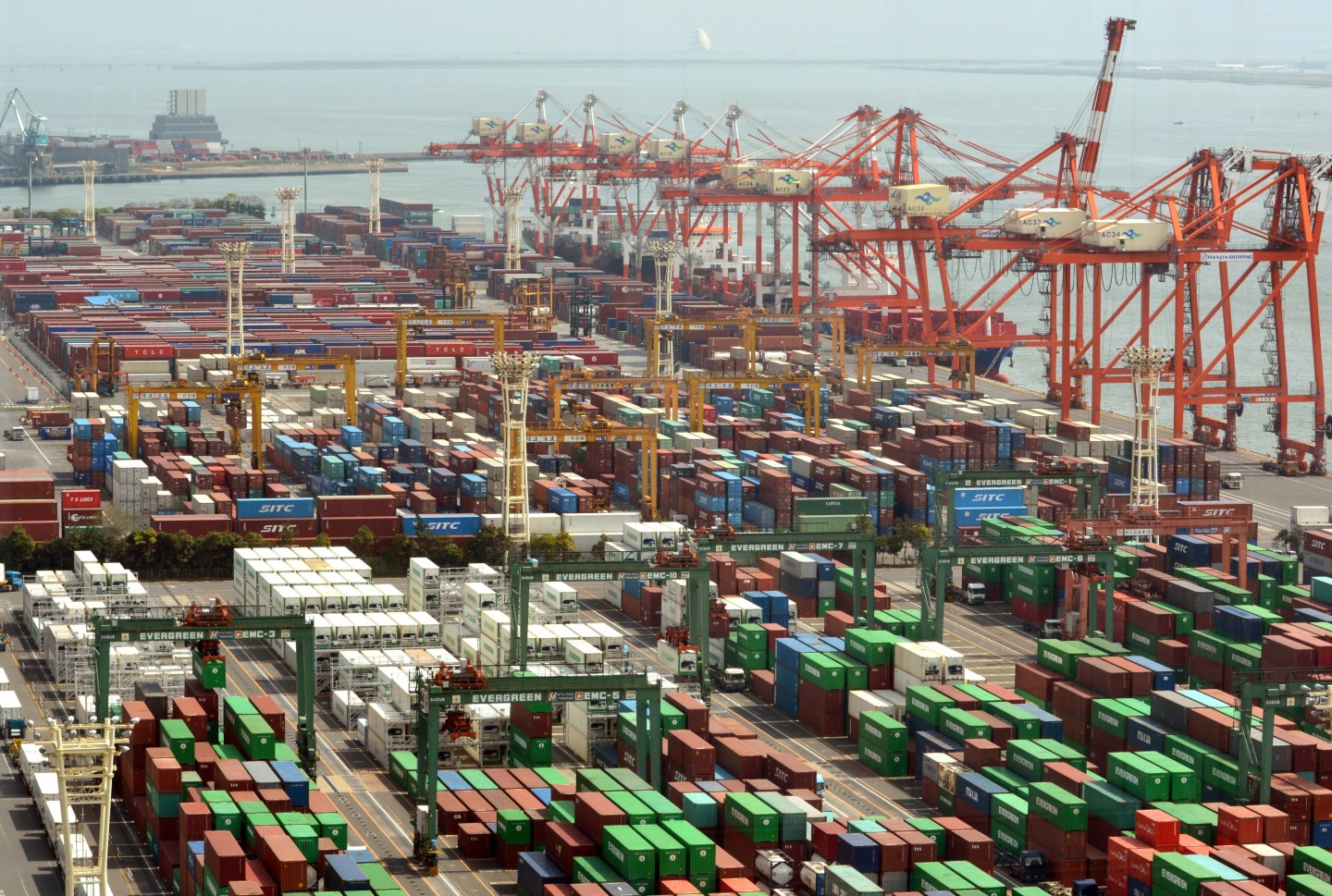 Japan‘s exports tumbled in July at the fastest pace since the global financial crisis with a resurgent yen adding to the challenge of weak external markets – leaving the economy and the government more reliant on shaky domestic demand to drive growth.

The yen edged toward a seven-week high versus the dollar, prompting bureaucrats from the Finance Ministry, the Bank of Japan and the financial regulator to hold an emergency meeting to examine the current state of the market.

Japan‘s top currency tsar reiterated a veiled threat to intervene in response to speculative moves, but traders say few options are available because it could be considered competitive devaluation, something the Group of Seven frowns on.

“We are constantly watching for speculative moves and will respond with the necessary steps if needed,” Vice Finance Minister for International Affairs Masatsugu Asakawa said after the meeting.

Policymakers are in a bind.

Still, intervention may be unable to stop the yen’s rise as long as investors pare back expectations for U.S. interest rate hikes amid a run of spotty economic data and mixed signals from Federal Reserve officials.

In July exports fell an annual 14%, which matched the median estimate in a Reuters poll of economists and was the fastest decline since October 2009.

Economists say there is a growing risk that weakness in exports will persist as global economic uncertainty shows little sign of receding, which could undermine Japanese policymakers’ efforts to re-energise the economy.

“Exports do not have the strength required to lead Japan‘s economy,” said Norio Miyagawa, senior economist at Mizuho Securities. “This is a clear message that we need to support domestic demand. Government stimulus will help, but only in the short term. There could be more talk of additional monetary easing.”

Exports in July fell due to lower shipments of cars to the United States, ships to Central America and steel to Italy, the data showed.

U.S.-bound shipments fell 11.8% year-on-year, versus a 6.5% annual decline in the previous month.

Real exports fell 3.2% in July from the previous month, the fastest decline in 14 months, separate data from the Bank of Japan showed. Real imports fell 1.1%, the first decline in three months, the data showed.

The yen has risen around 20% versus the dollar so far this year and further gains would cut deeply into exporters’ earnings and increase deflationary pressure by lowering import prices.

The volume of Japan‘s imports of oil and kerosene fell 8.5% in July, the first decline in three months, finance ministry data showed.

The BOJ said it will conduct a “comprehensive review” of its quantitative easing and negative interest rate policy at its meeting next month after repeatedly pushing back the timing for its 2% inflation target.

Some economists say the BOJ could use the review to ease monetary policy, potentially weakening the yen if bond yields decline further.

Prime Minister Shinzo Abe’s cabinet approved fiscal measures worth 13.5 trillion yen earlier this month in an effort to revive the flagging economy and breathe new life into his economic agenda.