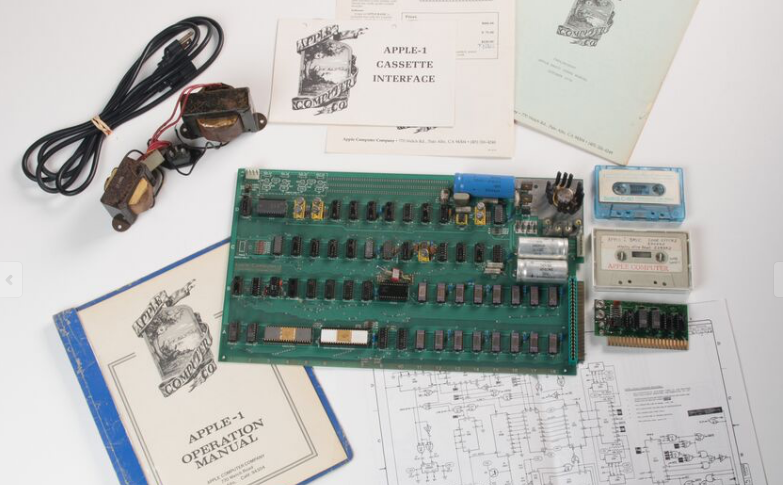 Steve Jobs and Steve Wozniak designed the first Apple (AAPL) computer for themselves for fun, and because they were broke.

To pay for the inaugural machine’s guts, they did what many scrappy entrepreneurs do when they’re just starting out: They hawked their prized possessions for capital. Wozniak sold his fancy HP (HPE) calculator and Jobs sold his Volkswagen bus. With the cash they ponied up, they were in business — almost.

Next, they “liberated some parts” from their employers. Tinkering with lifted bits from Hewlett Packard, Wozniak’s workplace, and from Atari, Jobs’s employer, the Woz rolled up his sleeves and got to work. There, out in the garage at Jobs’s childhood home in Los Altos, Calif., Wozniak “was up ’til four in the morning for many moons” jimmy-rigging the bulky “microcomputer” machine together. When they finally had a working prototype, the Apple 1, Jobs had eyes for selling it. That was back in the summer of 1976.

“We had absolutely no idea what people were going to do with these things when we started out,” the late Jobs recalled in 1980, while waxing nostalgic about the birth of Apple Computer Company, now Apple, Inc.

This truly is a unique piece of technology. Bid on this #Apple 1 for your chance to own this piece of history!https://t.co/t8nWRWb2J5

Flash forward to today, and the most unique, and quite possibly the first, Apple 1 in existence is up for auction on Charitybuzz. Dubbed the “Celebration” Apple 1 by computer historian Corey Cohen, it’s expected to fetch up to $1 million dollars.

Cohen, who authenticated the computer for Charitybuzz, tells Entrepreneur that the techie artifact is a one-of-a-kind find. That’s because not only are there believed to be approximately 60 to 70 Apple 1 units still in existence, but also because this pristine-condition collectible features a blank printed circuit board, was never sold to the public and — here’s the kicker — Cohen claims there’s a “high probability” that Jobs himself put his hands on it. (He doesn’t think Wozniak did. The inventor-engineer was likely too busy juggling his day job and writing the BASIC code to make nascent Apple computers function, column by column, by hand on a yellow pad.)

“The Apple 1 board is a not just a piece of history, but a piece of art,” Cohen says. “It’s different than every other Apple 1 we’ve ever seen, and its components are actually better quality. It’s Apple’s rookie baseball card, the unicorn in the forest with the biggest horn.”

Another reason Cohen says the “Celebration” Apple 1 is so special: It speaks volumes about Wozniak’s and Jobs’s pennywise entrepreneurial ingenuity and grit. “The RAM chips that are on it are very expensive and the RAM chips on all the other boards to come weren’t, comparatively,” he says. “So it’s as if they were playing with how cheap they could make future models, seeing which substitute components they could use for the cheapest, which would be very in line with something Steve Jobs would’ve done — find the least expensive components he could and scale.”

If there’s one lesson that entrepreneurs can extract from the backstory behind this particular Apple 1, according to Cohen, a longtime entrepreneur himself, it is to leverage existing mass-produced technology — and the manufacturing techniques behind it — in the most resourceful, innovative ways. Doing just that could enable you to get your business off the ground fast, and on a shoestring budget.

“Jobs and Wozniak applied an electronics manufacturing technique that was used for other things,” he says, “like radios and Atari machines, stuff from the defense industry, to produce a mostly assembled board so that they didn’t take weeks to build these things. It made them able to deliver their first 50 computers in 30 days with a skeleton crew of two or three guys in a garage. This shows that, once you have an assembled product, you can work on making that assembled product cheaper to maximize your profits and become successful in very little time.”

Borrow, modify, invent and reinvent for less. It’s the scrappy startup pattern that enabled Apple to help spark the personal computer revolution and to innovate time and again.

For more on Apple, watch this Fortune video:

Another example of how Jobs tweaked existing technology “designed for something completely different” to improve Apple’s, Cohen says, is when he signed an exclusive contract with glass manufacturing giant Corning (GLW). “He went to Corning and he basically said, ‘You know that Gorilla Glass you think is a failure? I want it,’” The result: the first smartphone to feature scratch-resistant glass, was a smashing success, and iPhones are still global top-sellers to this day.

But let’s get back to the now-obsolete technology that paved the way for Apple to mushroom into a multi-billion-dollar corporation — the humble “Celebration” Apple 1 and the race to own the bragging rights to it. If you’re in a position to bid, lucky you, the auction runs until Aug. 25, with 10 percent of the proceeds benefitting the Leukemia & Lymphoma Society.

More from Entrepreneur:
• ‘Steve Jobs’ Is a Fascinating Exploration of the Complexity of Genius
• Apple Co-Founder Steve Wozniak Sweetly Describes How He Fell in Love With Tech in Fun Reddit Video
• Vintage Apple 1 Computer Auctioned Off for Record-Setting $905,000

Three bids are on the books so far. The highest, as of this writing, was $270,000. As for Cohen, he’d rather not know how much money the historic relic, “the quintessential Apple to own if you’re a collector,” reels in.

“When there’s an auction like this, I intentionally try not to watch,” he says. “I feel attached to every Apple 1 board that I’ve worked on, but I have to let them go.”