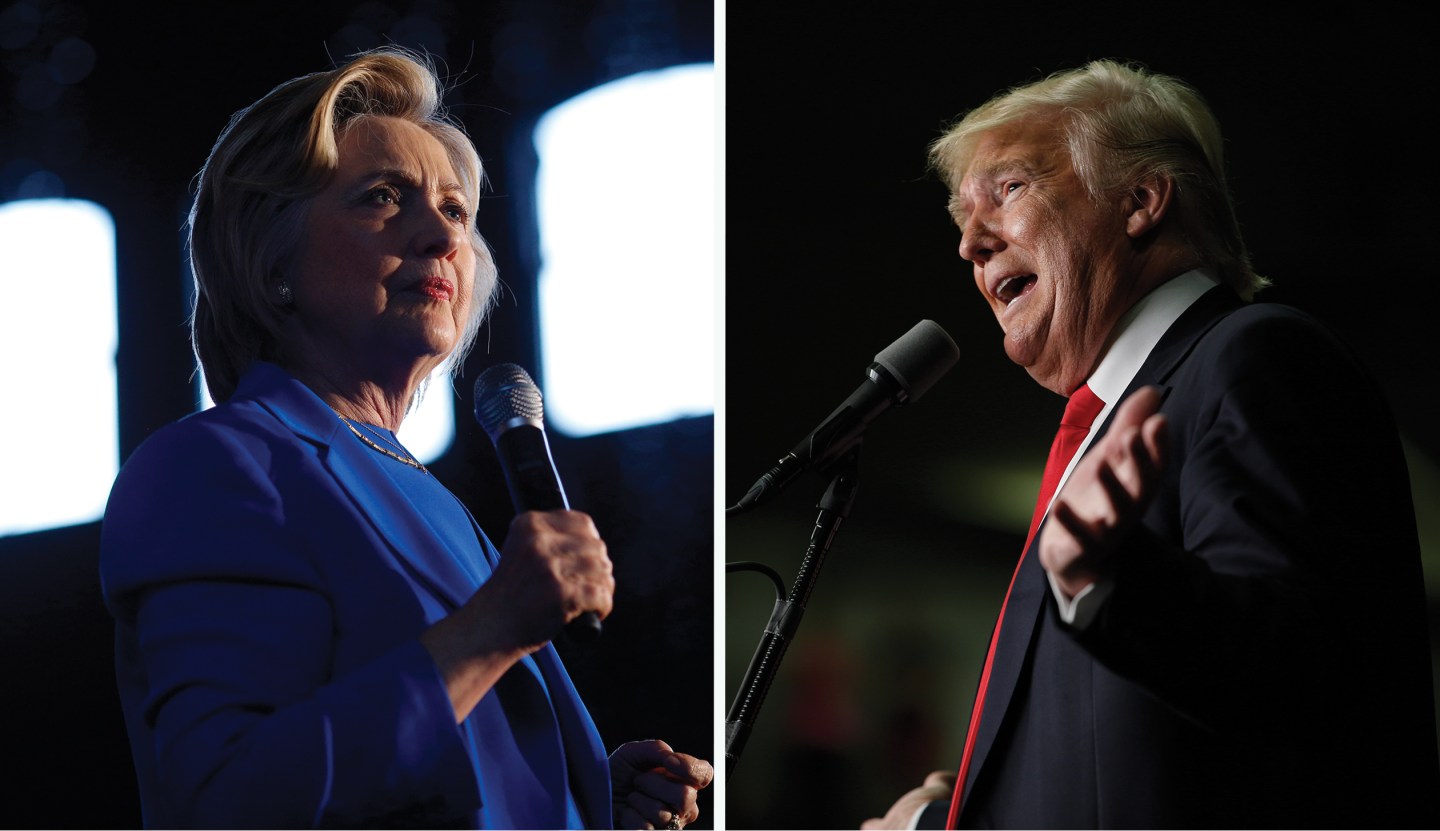 With VP picks lined up, it’s a good time to assess the Presidential candidates’ policy positions. On tech and innovation in particular, there are stark differences between Hillary Clinton and Donald Trump, with one candidate offering something close to a wish list for Silicon Valley, and the other supporting trade, labor, and security policies that few there would endorse.

Hillary Clinton’s lengthy position paper on tech and innovation offers one big headline—she wants the Federal government to help increase access to capital for startups, particularly those outside of current major capital zones and those run by women and minority entrepreneurs. Moves in that direction would include doubling funding for the State Small Business Credit Initiative, initially launched with $1.5 billion in 2010.

On the infrastructure front, Clinton explicitly supports efforts like those in Louisville to implement shared infrastructure legislation, which would speed the rollout of broadband. The platform also strongly supports net neutrality—though Clinton “rejects the false choice” between national security and privacy. Without offering details of how to slice that particular baby in half, Clinton calls for a commission to balance law enforcement and privacy concerns.

Republican Nominee Donald Trump’s platform and statements are, broadly, less tech-friendly than Clinton’s, with stances on trade, immigration, and speech that could stifle innovation. But tucked into those broad strokes are a few details that the tech sector could get behind.

Maybe the defining substantive feature of the Trump campaign has been skepticism towards free trade, and in particular, trade with China. The Trump campaign insists that it is calling for “fair trade,” not protectionism. One tech-friendly example is the Trump platform’s goal of forcing China to stop its technology-sharing mandates, which require U.S. companies to share patents with local partners in order to enter the Chinese market.

Trump says he’d accomplish this by having the Treasury department declare the country a currency manipulator, triggering U.S. tariffs. But Chinese currency manipulation has largely ceased, and there’s some anxiety that any Trump attempt to renegotiate trade deals could trigger retaliatory tariffs and harm globalized manufacturers—including American tech companies like Apple (APPL).

If being tough on trade is Trump’s most developed idea, being tough on immigration is clearly his loudest. He has called for a wall on the border with Mexico, but the plank that matters most for tech is his plan to increase mandated wage levels for workers arriving with H-1B visas, and to require that companies prioritize hiring Americans. Both of those would, at best, decrease tech hiring flexibility. STEM education initiatives to increase the number of Americans who can fill engineering and research roles are not part of Trump’s official platform.

Outside of platform positions, Trump has expressed skepticism about both the social and economic value of the tech sector. He has frequently seemed hostile or incomprehending towards both the free flow of information, arguably the sector’s driving principle, and the concept of consumer privacy protection.

He proposed “closing the parts of the Internet where ISIS is”—which he believed Bill Gates could help him with—and called those concerned about the freedom of speech implications of such a move “foolish people.” In response to negative coverage in Jeff Bezos’ Washington Post, Trump claimed Bezos bought the paper as a “tax shelter” that he could use to block antitrust action against Amazon (AMZN), which he described as a monopoly.

Meanwhile, Trump has lambasted Apple both for building iPhones in China, and for refusing to build a security backdoor for the FBI. Prior to primary season, Trump strongly suggested he supported executing Edward Snowden, who many in the tech sector—including Steve Wozniak—consider a hero.

All that helps explain why some major players in tech have distanced themselves from Trump. Apple and HP (HP) both withdrew their contributions to this week’s Republican National Convention, and Microsoft (MSFT) scaled theirs back. Facebook (FB) execs went rather far out of their way recently to separate the company from board member Peter Thiel’s RNC speech.

In that speech, Thiel summed up why he supported Trump: “I build companies and I’m supporting people who are building new things.” Thiel said Trump “is a builder, and it’s time to rebuild America.”