Roger Ailes Resigns: A Timeline of His Downfall 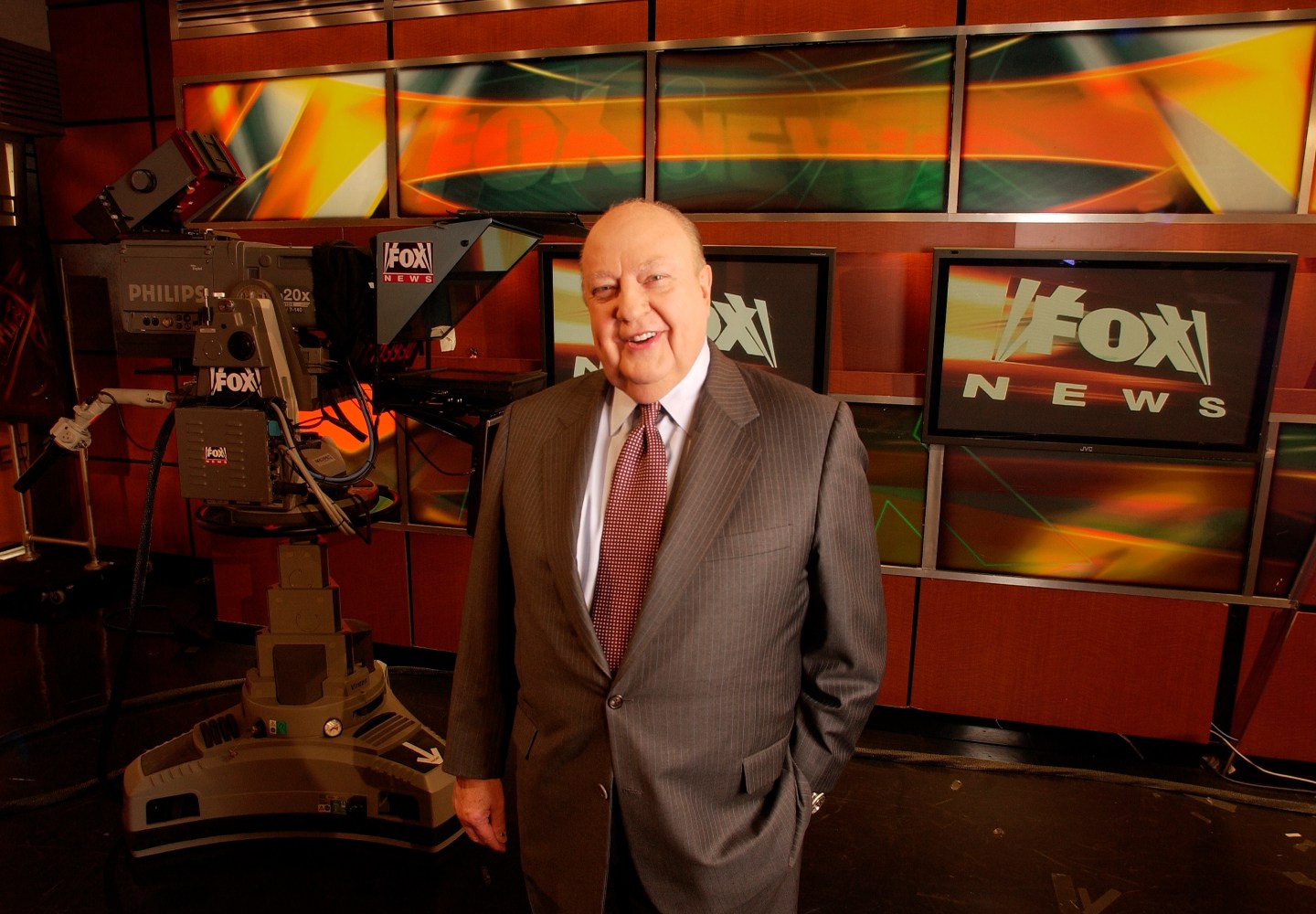 Roger Ailes is officially done at Fox News. The chairman and CEO of the cable news network resigned Thursday, exiting with severe damage done to his career and reputation in the wake of multiple reported accusations of sexual harassment by current and former Fox News employees.

Parent company 21st Century Fox confirmed the move in a press release on Thursday afternoon following much speculation that Ailes’ ouster was imminent. Fox made no mention of the sexual harassment allegations in the release, and Ailes has denied them. Rupert Murdoch will assume the role of chairman and acting CEO of Fox News and Fox Business Network.

Speculation over Ailes’ future had been growing since former host Gretchen Carlson filed a sexual harassment lawsuit on July 6, and several women, including Megyn Kelly, the star anchor, reportedly stepped forward, saying they, too, had experienced unwanted sexual advances from Ailes. New York magazine reported that Ailes had lost the support of the Murdoch family at parent company 21st Century Fox amid an investigation into the claims.

Ailes, 76, made his name in television in the late-1960s gig producing a popular talk show, The Mike Douglas Show. Ailes later served as Nixon’s campaign media advisor, championing the use of television as a platform for delivering the GOP’s message to the masses. Thus began a long stint working as a top Republican media strategist, playing key roles in the presidential elections of Ronald Reagan and George H.W. Bush.

Fox founder and current executive co-chairman Rupert Murdoch hired Ailes in 1996 to run the fledgling cable news network fresh off Ailes’ three-year run as the president of CNBC. While Ailes insisted at the time that Fox News would provide “objective reporting,” his background in Republican politics was a dead giveaway that he and Murdoch were launching a right-leaning network.

At Fox News, Ailes’ edict from Murdoch was to build a cable news network that could top Time Warner’s CNN in the ratings, which Fox News finally did under Ailes in 2002. Fox News has remained the top-rated cable news network ever since, becoming the highest-grossing cable news network with estimated annual revenue of $2.3 billion. What’s more, even with the Ailes drama going on, Fox News is enjoying its highest ratings ever in 2016, thanks largely to Donald Trump’s antics in the current presidential election.

After two decades at the helm of Fox News, Ailes has received credit for everything from changing the way cable news operates to helping steer the direction of conservative politics in the U.S. Over the years, Ailes has often been described as an intimidating micromanager who worked to shape Fox News in his own image while turning a number of conservative journalists into megastars, including Bill O’Reilly, Sean Hannity, Glenn Beck (for a time), and (most recently) Megyn Kelly.

Still, Ailes’ domination over the Fox News empire showed signs of weakening last year, after Murdoch stepped out of the CEO role at 21st Century Fox, ceding that position to his son, James Murdoch. Rupert Murdoch shares the co-chairman role with his other son, Lachlan. While there have been varying accounts regarding the company’s reporting structure with regards to Ailes, the news was regarded by some as something of a demotion for the Fox News chief, with New York‘s Gabriel Sherman calling it a “power shift.”

How the scandal unfolded

Gabriel Sherman’s 2014 unauthorized biography on Ailes had included stories of women, most unnamed, who said they had been sexually harassed by Ailes. But after Carlson’s lawsuit was filed July 6th, a stunning succession of events led to his ouster only 15 days later.

Gretchen Carlson, a former Fox News anchor, filed a lawsuit against Ailes accusing him of sexual harassment and alleging “sexist” treatment by former co-host Steve Doocy. Carlson claimed in her lawsuit that her June 23 firing was retaliation for her refusing Ailes’ sexual advances.

Ailes denied the allegations, dismissing Carlson’s complaint as “a retaliatory suit” and claiming that the former anchor had been fired due to low ratings. 21st Century Fox issued its own statement expressing its confidence in Ailes (and Doocy) while also saying the company “takes these matters seriously” and promising to conduct an internal investigation.

CNNMoney reported that Carlson’s lawyers claim “at least ten” additional women contacted them following the filing of Carlson’s lawsuit with the desire to speak out against Ailes.

New York’s Gabriel Sherman reported that he’d spoken with six alleged victims who contacted Carlson’s attorney—including two who allowed Sherman to print their full names. The women talk about incidents dating from the 1960s to 1989.

21st Century Fox hired a corporate law firm Paul, Weiss, Rifkind, Wharton & Garrison to conduct the investigation. New York’s Sherman theorized that the move might have been driven by the younger Murdochs, who have reportedly wanted to force out Ailes for some time. (Fortune‘s Roger Parloff even noted that Carlson not naming Fox News as a defendant in her lawsuit might have been a strategy to drive a deeper wedge between Ailes and the company.)

Cavuto, an anchor at the Fox News-run Fox Business Network, penned a first-person article in support of Ailes for Business Insider, writing “all this stuff I’ve been reading about Roger is a lot of clutter and a lot of nonsense.” Because Cavuto holds the titles of managing editor and senior vice president, his public support for Ailes reportedly raised questions as to whether his letter might be seen as a manager inappropriately attempting to influence employees to support Ailes or discouraging other women from coming forward. For his part, Cavuto told The New York Times that he “had no Machiavellian motive or sinister intention” in writing the article.

Lawyers for Ailes filed motions in federal court in New Jersey to have Carlson’s lawsuit moved to arbitration in hopes of avoiding a trial, while also seeking to move the suit from New Jersey to New York. Ailes’ lawyers have claimed in court filings that Carlson’s lawsuit is intended to “tar Mr. Ailes’ reputation publicly, try this case in the media press, and coerce him to settle.” In response, Carlson’s lawyers have accused Ailes of “judge-shopping and forum-shopping.” Ailes’ legal team includes high-profile litigators such as John Quinn, the general counsel of the Academy of Motion Picture Arts and Sciences, and Susan Estrich, the former campaign manager for Michael Dukakis and a notable voice in efforts to reform rape laws in the U.S.

A report from New York‘s Gabriel Sherman cited anonymous sources saying that the Murdochs were close to removing Ailes as the head of Fox News amid the ongoing sexual harassment probe and that a move could even come during the Republican National Convention.

New York‘s Sherman dropped a potential bombshell by reporting that, according to his anonymous sources, Megyn Kelly had told Paul, Weiss investigators that Ailes sexually harassed her a decade ago. Kelly has not publicly commented.

Confusion broke out across the media landscape after conservative blogger Matt Drudge posted a report claiming that Ailes had officially departed Fox News, along with an image of a supposed separation agreement stipulating a $40 million buyout for the CEO from the network. The Daily Beast then reportedly received confirmation from a 21st Century Fox spokesman that Ailes was officially out. However, Drudge later removed the initial post and replaced it with a headline in which Ailes denied ever harassing Megyn Kelly, and Fox’s spokesman also walked back the company’s confirmation to The Daily Beast. As a result, several media outlets still reported that Ailes was set to depart Fox News by the end of the week, based on anonymous sources, while Fox tweeted out this response:

Ailes’ lawyer, Estrich, told The Hollywood Reporter in a Q&A that the Fox News chief could stay on with the network in a consulting role should he depart as CEO. Referring to Ailes, Estrich said “his mood is OK” and she added that what Ailes wants most is for “Fox News to continue to be the No. 1 news station and the No. 1 cable station in the company.”

Lawyers for Ailes and Carlson appeared in court in New Jersey as a federal judge sought to plot the course of the lawsuit in the wake of “rapid fire” motions from the parties, include Carlson’s motion to block Ailes’ attorneys’ request for arbitration.

Various reports maintain that Ailes and Fox remained in the process of hammering out a separation agreement that was reported to include a buyout worth at least $40 million and a possible consulting role at the network:

Ailes-21CF talks still wrestling over $$; language of apology or acceptance of responsibility; and length of consulting term

In a statement provided by 21st Century Fox, founder and executive co-chairman Rupert Murdoch said: “To ensure continuity of all that is best about Fox News and what it stands for, I will take over as Chairman and acting CEO, with the support of our existing management team under Bill Shine, Jay Wallace and Mark Kranz.”

A joint statement from James Murdoch and Lachlan Murdoch, Fox’s CEO and co-executive chairman, respectively, read: “We join our father in recognizing Roger’s remarkable contributions to our company . . . We continue our commitment to maintaining a work environment based on trust and respect. We take seriously our responsibility to uphold these traditional, long-standing values of our company.”

For more on Roger Ailes and the future of Fox News, read Matthew Ingram’s coverage. For what this ouster says about sexual harassment in the workplace, read What Roger Ailes’ Drama Says About Sexual Harassment in Fortune.