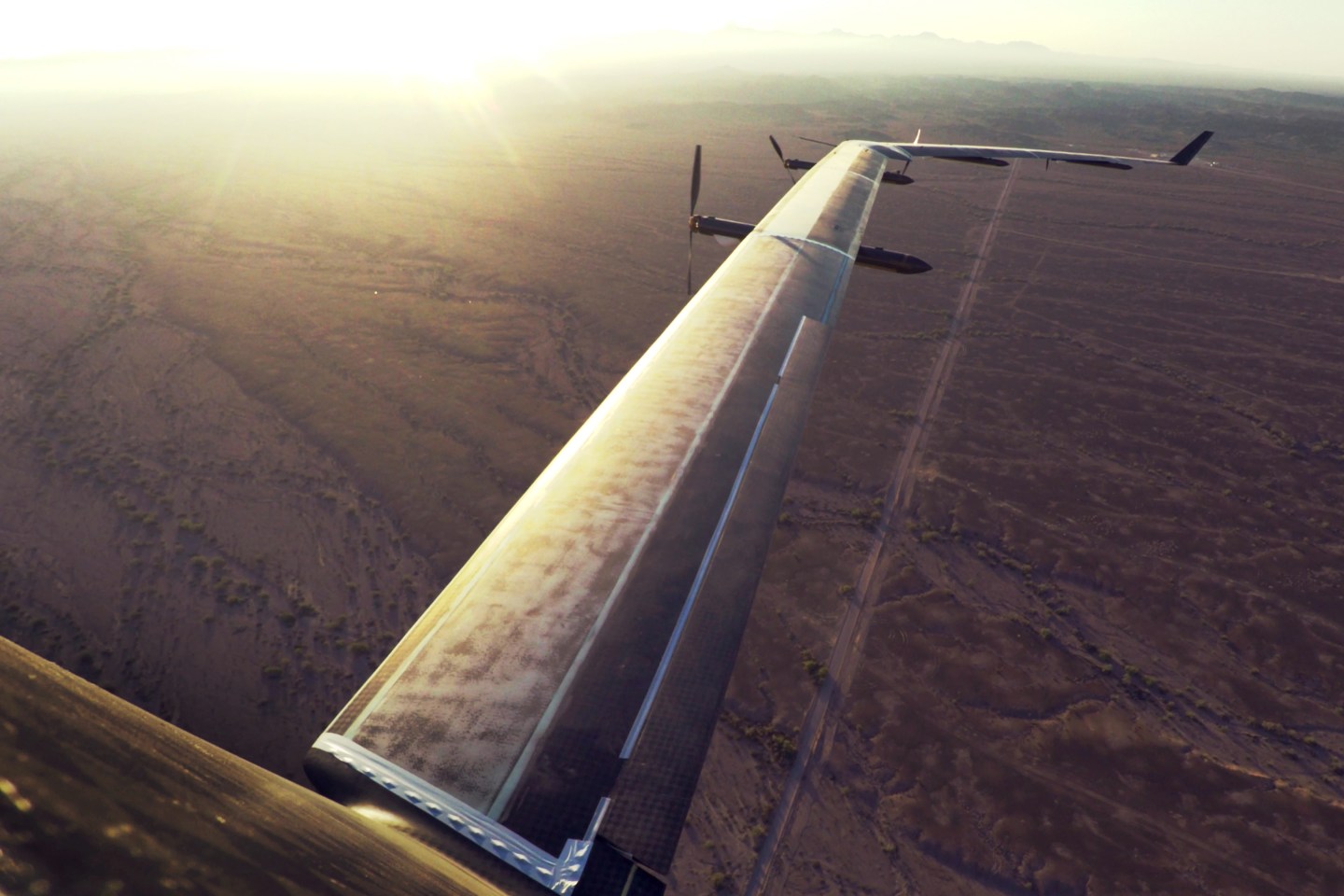 Facebook’s solar-powered, Internet-beaming drone is one step closer to bringing the web to earth.

The social networking giant said on Thursday that its unmanned aircraft, named Aquila, successfully passed its first test flight on June 28 in Yuma, Ariz. Although Facebook (FB) has been flying a smaller version of the drone over the past several months, the social network touted this test flight in late June was the first time it flew the actual drone.

The Aquila drone is part of Facebook’s ambitious plans to bring the web to regions in the world where Internet connectivity is bad or non-existent. Facebook is looking for ways to beam the Internet down from the sky to these regions and has been working over the past few years on a custom-designed drone to help it do so.

The Facebook drone project is similar in idea to Google and its Project Loon Internet project. But whereas Google (GOOG) wants to use giant balloons that would hover in high altitudes to establish an aerial wireless network, Facebook wants to use a fleet of drones outfitted with solar panels, batteries, and an electric motor that could remain in the sky for three months.

Aquila has the wingspan of a Boeing 737 and weighs about a third of a Toyota Prius car. When it flies in the air at cruising speed, it consumes roughly 5,000 watts, which is “the same amount as three hair dryers, or a high-end microwave,” wrote Facebook vice president of infrastructure engineering Jay Parikh in a blog post about the flight.

Facebook noted it originally planned on flying the drone for 30 minutes for the Yuma test flight, but the project went so well that operators extended the flight to 96 minutes.

Still, Facebook has a long ways to go before it can start beaming the web to the ground from the Aquila drone. Aquila only flew to around 2,150 feet above the ground—far from the 60,000 to 90,000 feet altitude in which it wants its yet-to-be developed drone fleet to hover.

The drone must also be able to stay up in the air at night, which could be difficult during the winter when there is less daylight, according to a Facebook engineering post on some of the challenges the social networks is trying to address. The solar panels need to collect “enough energy during the short days to keep the batteries charged over the long night, up to 14 hours at a time,” the post elaborated.

Facebook said that batteries “account for roughly half the mass of the airplane,” and it is “pushing the edge of high energy-density batteries,” which hints that Facebook is possibly researching new battery technologies or designs. Additionally, building such an elaborate research drone costs a lot of money, and Facebook stressed it is “working with the industry” to more quickly and cheaply develop the kinds of technologies required to build more of these drones.

Then there’s the actual capability of the drone to continuously transmit wireless signals between other drones as well as stations down on the ground. Pulling that off successfully, “will require continued advances in science, engineering, and design,” according to the Facebook blog post.

Still, the fact that Facebook was able to launch the drone up in the air and have it fly around is a first step.

“Put simple, this has not been done before,” Facebook boasted.