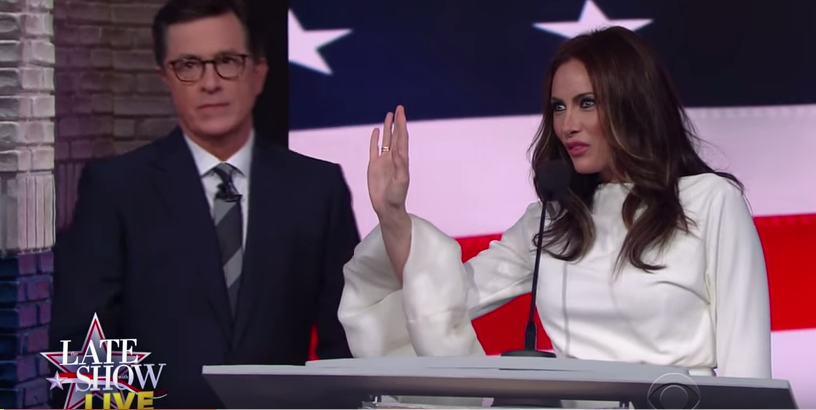 For the second night in a row, late-night comedian Stephen Colbert followed the action at the Republican National Convention in Cleveland with a live edition of The Late Show on CBS.

Wearing the same dress Melania wore at the convention, and mimicking her accent, “Melania” defended herself against the charges of plagiarism by featuring a long string of lines and catchphrases taken from sources ranging from Charles Dickens to the movie Braveheart and the TV show The Fresh Prince of Bel Air.

Colbert’s most RNC-focused segment of the evening focused on Trump’s lack of support among African-American voters in Ohio, where the convention is being held. Colbert’s first guest of the night, comedian Keegan-Michael Key, then appeared in a sketch where he portrayed a character named Frank Walters, who was supposed to be one of the few black Trump supporters from Ohio at the convention.

Wearing a Trump 2016 shirt and a “Make America Great Again” hat, an in-character Key told Colbert that his experience at the convention had been “amazing” and that the other convention attendees had been inexplicably excited to see him: “From the moment I got here, everyone has been so nice. They gave me a hat, they gave me a shirt. They’re always putting me on camera for some reason. I’ve never been so popular in my life! People keep coming up to me saying ‘Thank God you’re here.’ And, they say ‘You’re one of the good ones.'”

Colbert is hosting a series of live versions of The Late Show both this week and next, as he joins several other late-night TV hosts looking to ramp up coverage of both the RNC and next week’s Democratic National Convention. For Colbert, the move offers an opportunity to return to the political comedy roots he found so much success with on Comedy Central before leaving to take over for David Letterman at CBS last fall.

While Colbert’s Late Show has consistently ranked second in the ratings behind NBC’s The Tonight Show, Monday night’s live return of both Stewart and the Colbert Report character did manage to boost the show’s ratings for at least one night.