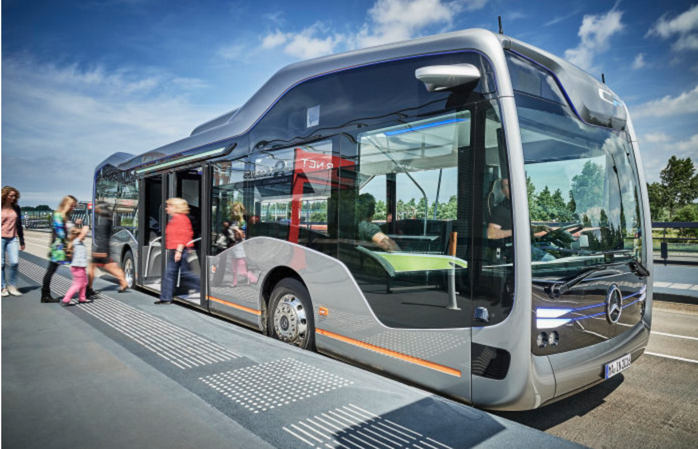 Daimler’s answer to traffic congestion is a high-tech spin on the lowly city bus.

The German automaker’s semi-autonomous bus—called the Mercedes-Benz Future Bus—made its first public journey on Monday along a 12-mile route dotted with tight turns, tunnels, and traffic lights between Amsterdam’s Schiphol airport and the town of Haarlem. The company called the successful navigation of the route a milestone on the road to autonomous city buses. Daimler did not reveal a timeline for when the bus might be adopted by the city’s mass transit authority.

The technology, called CityPilot, captures data from nearly a dozen cameras, short-range radar, and GPS, and uses it to navigate a pre-determined route, recognize obstacles, and brake on its own when necessary. The software not only recognizes traffic lights, it can communicate with them to signal that they’re approaching—a handy feature that when used correctly could speed up travel times and reduces tailpipe emissions. The bus, which can reach a top speed of about 43 miles per hour, approaches stops automatically, and opens and closes its doors so passengers can go on and off.

There still are drivers at the wheel, although they don’t need to always steer, use the accelerator, or brake. Daimler says that drivers must only take control of the wheel when traffic regulations require it or when technology cannot handle the road conditions.

Daimler is hardly the only company to work on self-driving mass transit for cities. It’s not even the first in the Netherlands. However, most of these other efforts are focused on shuttles that hold a limited number of people and travel short distances or in closed loops.

For example, WePod has developed an electric, driverless shuttle bus that is being tested in the Dutch agricultural town of Wageningen. Last month, Arizona-based startup Local Motors unveiled a 3D-printed self-driving shuttle that can carry up to 12 people. It will be used on a limited basis on public roads in National Harbor, MD, a planned mixed use development a few miles south of Washington D.C.