A Grown Up Solar Industry Looks to Lower Costs Though Tech 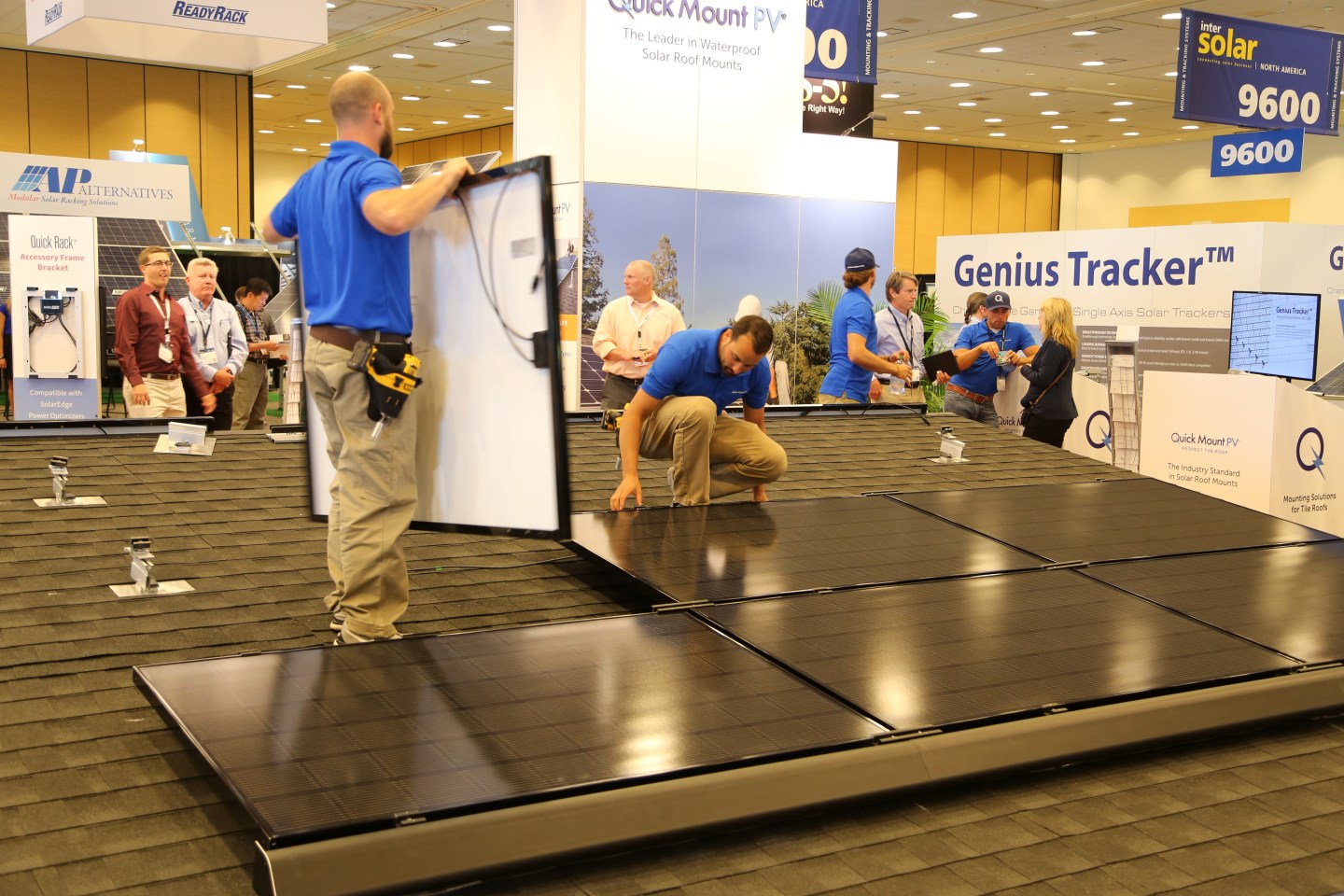 With more than a million solar panel systems installed across the U.S., turning sunlight into electricity across major states like California, New York, and North Carolina, the solar industry has officially gone mainstream.

Gone are the days when government subsidies dominated the conversation and solar panels were a luxury for the rich. But now a major challenge, like with so many other maturing industries before it, is for solar companies to continue to squeeze out costs wherever possible—from the cost of making panels to the cost of selling and maintaining them.

Over the next 15 years, solar panels are expected to become the cheapest source of power in many countries, according to a recent report from Bloomberg New Energy Finance. Solar panels could cost an average of four cents per kilowatt hour by 2040, which is cheaper than coal and natural gas power in many regions.

As the world continues to adopt solar technology, there’s big money to be made off of solar hardware, components, services, and software.

Part of the predicted lowered solar costs could come from new ways to manufacture solar panels. Today most solar companies take large chunks of silicon, called ingots, and use saws and wires to cut the ingots into bricks and much smaller wafers. These silicon wafers make up the building blocks of the solar panel, and collectively account for about 40% of the panel’s cost.

For more on the dropping cost of solar watch our video.

A nine-year-old startup called 1366 Technologies has developed a new way to make these standard silicon wafers, which it says can cut wafer costs in half. The company forms wafers directly from a pool of molten silicon, cools the wafers, and trims them, in a process similar to making sheets of glass.

The company says that its process is far quicker, and leaves much less silicon waste, compared to traditional silicon wafer manufacturing. However, the technology isn’t yet commercial.

1366 Technologies had planned to break ground on a big factory in upstate New York by the end of June. But it will now likely start building the factory closer to 2017.

Over the past couple of decades, many of the cost savings in the solar sector came from these types of panel and manufacturing innovations, which led to the rise of solar giants like First Solar (FSLR) and SunPower (SPWR). But today as the industry matures, much more of the expected lowered production costs will come from new components that plug into traditional silicon solar panels, new ways to manage the electrons from panels, or new ways to finance and sell the panels.

A three-year-old company called NEXTracker makes what are called trackers, which automatically tilt solar panels during the day to follow the sun as a way to increase the electricity production. These trackers are generally used on large solar panel farms in remote locations that sell their power to utilities or large companies.

NEXTracker’s trackers are designed to lower a solar project owner’s costs and boost energy output. The company has been so successful at selling its trackers that electronics giant Flextronics (FLEX) bought it last year for about $330 million.

Beyond hardware, much of the cost reductions for solar panels will be about using software, data, and services to sell, build, and maintain solar panel systems.

Solar installer giant SolarCity (SCTY) spent a couple of years buying software and data providers that could help with sales and marketing of solar panels. As you’d expect, convincing homeowners to buy rooftop solar panel systems can be costly and difficult.

Data and software can help solar project owners better monitor, and, in turn, make more money off of both solar roofs and big solar panel farms. A company called Locus Energy has software that it says can reduce the costs of remotely monitoring solar systems.

Another startup called Folsom Labs, based in San Francisco, has developed software called HelioScope, which helps solar developers design and collaborate around sprawling solar panel farms. The company says its software can churn out a blueprint showing a layout of a solar farm along with a calculation of how much energy it can produce, in just a couple of minutes.

Other new technologies are about helping solar panels, which generally have a two decade life span, brave the elements. A company called DDSolar is selling a dust detection system that alerts owners of large solar panel farms about the best time to clean the panels. Keeping the panels clean boosts the electricity output of the panel, and generates more money for the owner.

Some of the ways solar companies can cut costs is, quite frankly, to cut out the humans. Some companies are turning to robots for increasing amounts of the manufacturing work, outdoor cleaning, and even the installation.

Not all of the innovations in the solar industry are directed solely at lowering initial costs. Many companies are looking to install batteries next to solar panels to store the energy they produce. Batteries add to the upfront cost of solar systems, but enables them to produce energy at night.

Tesla (TSLA), which plans to buy SolarCity for $2.86 billion, wants to one day sell a combined solar and battery product that Tesla CEO Elon Musk says would be the best looking one out there. However, few other big solar companies are talking much about solar panel and battery aesthetics.

Big solar panel makers are also eager to boost the efficiency of their panels by increasing the amount of sunlight that their panel can turn into electricity. Solar panels with greater efficiency generally cost more, but can produce more energy in a smaller space, so can reduce costs in the long term.

Despite the big growth forecast for the solar industry, solar stocks have had a tough year. That could partly be because of the bankruptcy of one of the industry’s largest developers, SunEdison, which tried to grow too big too fast. It’s flameout, however, had little to do with the boom in both solar and wind.