Clean Energy Got a Record $330 Billion in Investment Last Year 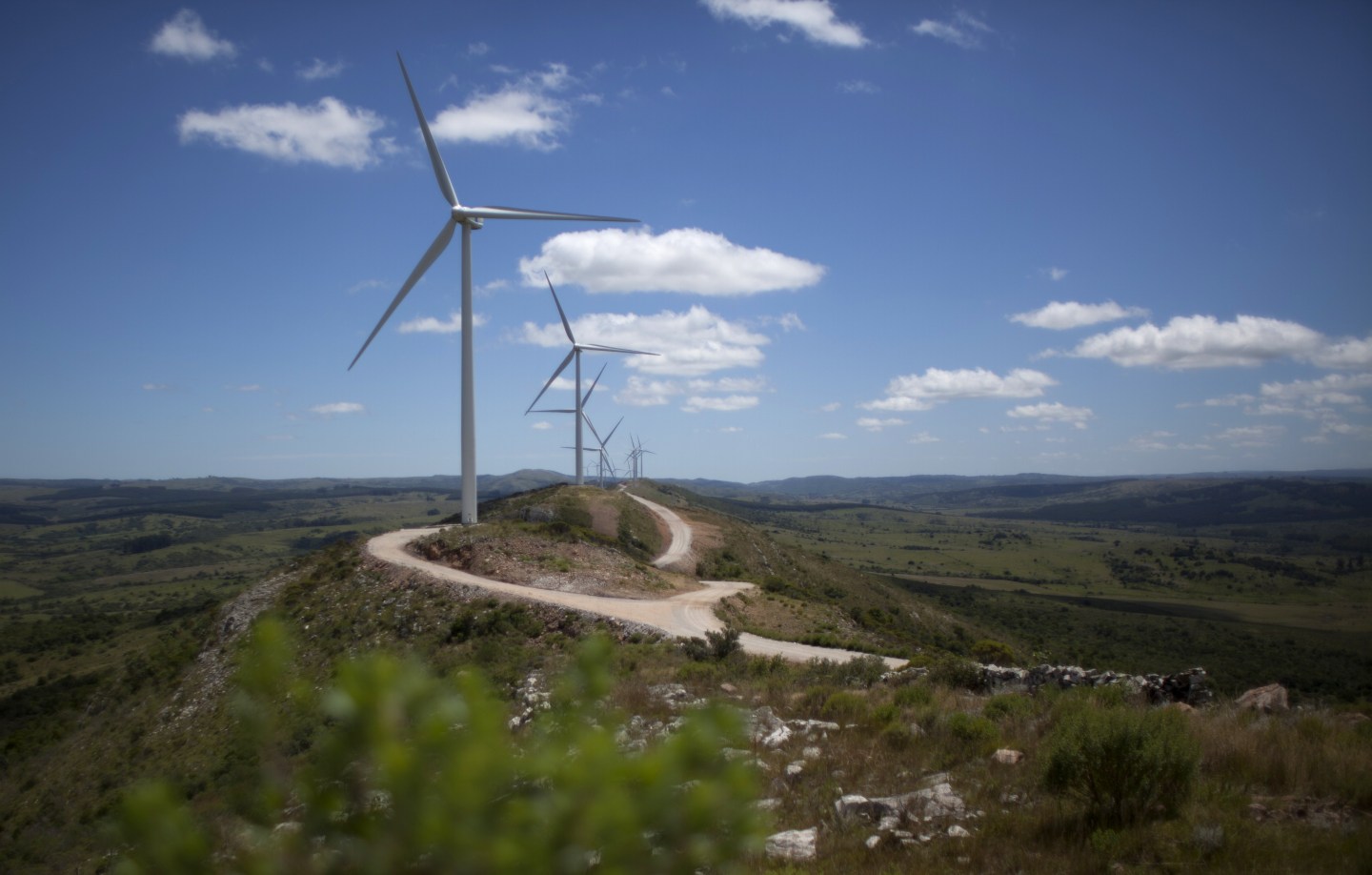 TO GO WITH AFP STORY by Eugenia Logiuratto Wind turbines are seen at the Sierra de los Caracoles wind farm, in the department of Maldonado, east of Montevideo, on December 18, 2014. Windmills are beginning to dot Uruguay's countryside as the nation prepares to become the world's biggest wind energy producer in proportion to national consumption this year. AFP PHOTO / Nicolas GARCIA (Photo credit should read Nicolas Garcia/AFP/Getty Images)
Photograph by Nicolas Garcia — AFP/Getty Images

Despite the plunge in oil prices, investors and governments around the world put $330 billion into clean energy last year including solar farms and wind projects built on both land and sea, according to a new report.

The huge funding, as calculated by Bloomberg New Energy Finance, highlights the global shift by many countries to shift to cleaner energy and away from certain fossil fuels like coal.

The bulk of that funding (about $200 billion) went to industrial-sized projects that provide clean power to utilities. For example, power companies, banks, governments and other private investors funded a handful of large offshore wind farms off the coasts of England, China, and Germany last year. Investors also funded a big solar panel project in the U.S. Southwest and a large geothermal project in Turkey.

Not surprisingly, about a third of the funding occurred in China amid increasingly aggressive support for solar and wind projects by the Chinese government to help the country meet its rising electricity demand and reduce some of its pollution problem. Investors in the U.S. and European countries spent about half of China’s clean energy funding.

In addition to money for utility-scale clean energy projects around the world, another $67 billion went to installing solar panels on rooftops and to smaller solar projects on the ground. Japan, the U.S., and China spent more than other countries on these smaller solar installations.

The public markets added another about $14 billion in funding to clean energy companies last year. One of the most tracked was a $750 million secondary share issue by Tesla (TSLA) that said it would use the funds to grow its business in the U.S. and internationally.

For more about the economics of clean energy:

In comparison to the growing number of financing options, venture capitalists and private equity investors are still unwilling to invest much into energy tech startups. Last year, these investors funneled a little over $6 billion into clean energy companies globally. One of the largest deals was a $500 million round for NextEV, a startup that plans to build an electric car and rival Tesla.

While VCs put 27% more money into clean tech companies last year compared to 2014, the recent funding is still only about half of what went into cleantech startups during the Silicon Valley cleantech bubble of 2008. Silicon Valley investors that are still funding energy tech companies are trying out new approaches or focusing on the intersection of software and energy.

On Thursday, a young San Francisco firm called Generate Capital said it had committed $150 million in financing last year to small scale energy infrastructure projects like more efficient water pumps, batteries for buildings, and LEDs. The company puts up the money to get the project built, and then makes a return by taking part of the cash flow.

Other new types of funds for clean energy companies and even early stage cleantech projects could come from new types of partnerships between the private sector and governments. Late last year, Bill Gates launched a high-profile multi-billion-dollar cleantech research and development initiative that seeks to work with developed and developing countries to boost financing for early stage energy tech innovation.