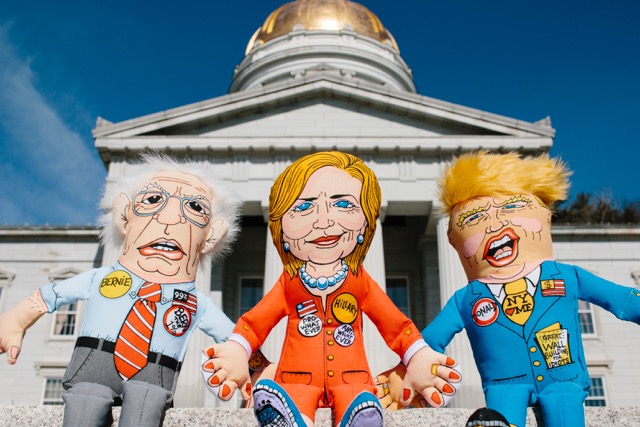 When walking into a pet store, you probably wouldn’t expect to see Donald Trump, Hillary Clinton, or Bernie Sanders. But in many pet stores across the country, customers have. Well, in pet chew-toy form, at least.

The toys are “definitely the hottest items on the shelf right now,” Andrew Tsartsalis, president of Pet Central, told the Washington Post.

The Hillary Clinton, Bernie Sanders, and Donald Trump chew toys —stylized but recognizable—show Clinton wearing a button that says, “Pro-Whatever” and with a switch on her back labeled, “Smile: On/Off.” Under her right foot, a shattered Blackberry. Sanders is featured with a “Bern the 1%” button and a button on his back reading: “Push to activate the revolution.” The toys come in 8″ for cats, and 17″ for dogs.

But if you’re wanting to buy the Donald Trump toy for your pet, you may be out of luck: The Trump dolls keeping selling out. In Chelsea, West Village, Upper West Side and Carnegie Hill, for example, the Trump toys are out-selling Clinton toys 3-to-1, Tsartsalis told the Post. And in Murray Hill, Trump is out-selling Clinton 4-to-1.

As for the wild-haired Sanders doll? “Not even in the ballpark,” he said.

John Lika, the co-founder of Fuzzu, the small Vermont-based company that makes the toys, said the sales patterns around the country seem to be the same: Trump is selling out continuously in stores, and the company is getting quick re-orders, as often as twice a week.

The Trump toy—which is currently 56% of the toy’s sales—far outweighs the sales of the Clinton and Sanders toys, which are at 36%, and 8%, respectively. As to why the Tump toy’s sales are so high, Lika thinks it has to do with more than just his, “orange plush comb-over.” Although some buyers admire the character, others want to see, “Donald chewed on and tossed around vigorously,” Lika told Fortune. As for the high volume of Trump sales, Lika thinks the latter is the motivation.

“I would say that our Donald is allowing people to feel some form of comic relief, considering how crazy this election season has become,” he said. “We believe that the high sales numbers of our Donald are an opposite indication of his political success to date.”

This isn’t the first time the company, which considers itself as an entertainment brand for people and pets, has dabbled in political parody-themed toys. The inspiration for the new line featuring Trump, Clinton and Sanders, came out of Fuzzu’s last venture, Fat Cat, Inc., which was founded 1993 and sold in 2007, according to Lika. The previous line had political parody toys of President Clinton, Hillary Clinton, Newt Gingrich, Toss Perot, Arnold Schwarzenegger and even President George W. Bush.

“We knew this new Presidential Parody line would be well received based on our past experience, but we never expected the ‘huge’ impact our Donald design would be in terms of sales,” Lika said.

Other than pet toys, the Trump, Clinton, and Sanders characters also come in a 27″ jumbo toys for humans, which are, “perfect for people as a conversation stater,” Lika said. “We design toys to make people laugh.”

And, with the current state of American politics, perhaps Lika has a point in finding a bit of comic relief. In this case, it just happens to come in the form of presumptive presidential nominees and an ex-presidential candidate as a pet toy.