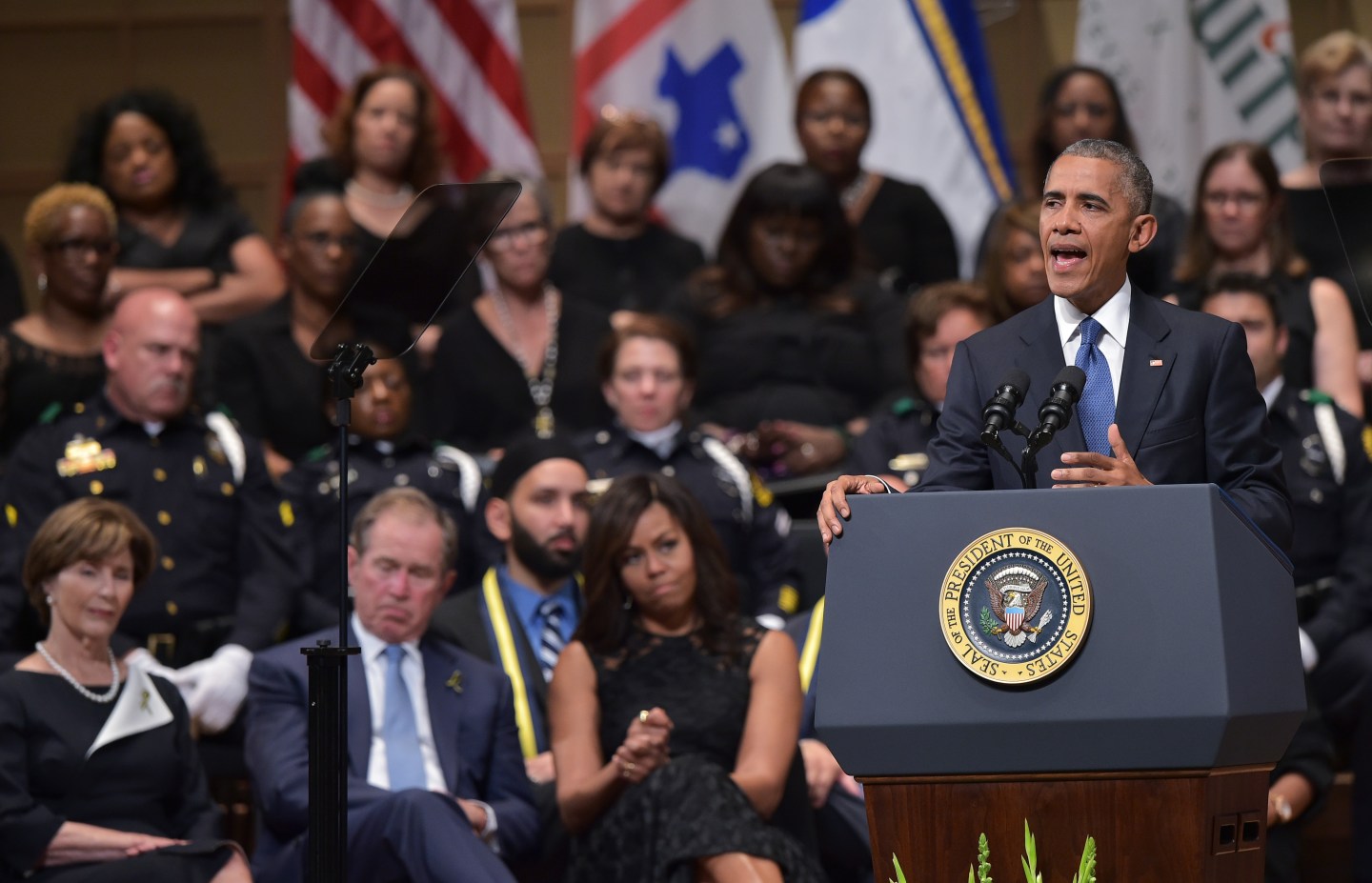 Speaking in front of friends, family members, and co-workers of the five Dallas Police officers who were killed in a shooting last week, President Obama addressed the chasm between whites and minorities in America, particularly the growing tension and distrust between police departments and the communities of color they work in.

“I know that Americans are struggling right now with what we’ve witnessed over the past week,” Obama said, referring not just to the shootings in Dallas but to the shooting deaths of black men in Minnesota and Louisiana by police officers, which led to the the protests during which the Dallas police shootings took place.

Obama played the role of the pragmatic idealist, beginning by offering mostly unqualified praise of the Dallas police department and the officers who were at the protest.

“They were upholding the constitutional rights of this country,” he said. “And despite the fact that police conduct was the subject of the protest … these men and this department did their jobs like the professionals that they were.”

Obama called the shooting in Dallas “an act not just of demented violence, but of racial hatred.” Using such language was surely no accident. In a world where the definition of racism and the people who are capable of being racist are frequent subjects of debate, labeling the attacks racial hatred offered a clear signal of where the president stands.

It was difficult not to compare Obama’s remarks in Dallas on Tuesday to the “A More Perfect Union” speech the president gave during his 2008 campaign after controversy began to swirl about statements made by his former pastor, Rev. Jeremiah Wright. In that speech, which some consider the most important speech made on American race relations since the end of the Civil Rights Movement, Obama described how black Americans experience everyday life in the U.S. differently than their white neighbors.

A lack of economic opportunity among black men, and the shame and frustration that came from not being able to provide for one’s family, contributed to the erosion of black families – a problem that welfare policies for many years may have worsened. And the lack of basic services in so many urban black neighborhoods – parks for kids to play in, police walking the beat, regular garbage pick-up and building code enforcement – all helped create a cycle of violence, blight and neglect that continue to haunt us.

Obama also addressed the way white Americans sometimes react negatively to being told that their privilege may blind them to the injustices faced by people of color, saying that “Most working- and middle-class white Americans don’t feel that they have been particularly privileged by their race. Their experience is the immigrant experience – as far as they’re concerned, no one’s handed them anything, they’ve built it from scratch.”

President Obama reiterated the themes of divisiveness and misunderstanding in Dallas on Tuesday. The president said that “people retreat to their respective corners. We see all this, and it’s hard not to think sometimes that the center won’t hold.”

At a time when racial tensions have been more pronounced than perhaps anytime since the days of the Civil Rights Movement — driven partially by the increased ability of people of color and other minorities to tell their own stories on social media and other online platforms — Obama has often had to walk a fine political line. As the nation’s first black president, he has a different perspective on the ongoing racial issues than any other leader, but he has also tried to play the role of unifier, sometimes to a fault according to critics.

After praising the Dallas Police Department and officers across the country, Obama described the racial biases felt by all people, including police officers. He implored officers to see their own children in the minority youth they police — and for young people of color to see their own parents in the police they interact with.

It is perhaps fitting that this address, which will likely be among the last major speeches the president will give while in office, focused on race. Presidential watchers may well remember this speech and the one given in 2008 as bookends to the Obama years — messy but forward moving, troubled but hopeful.