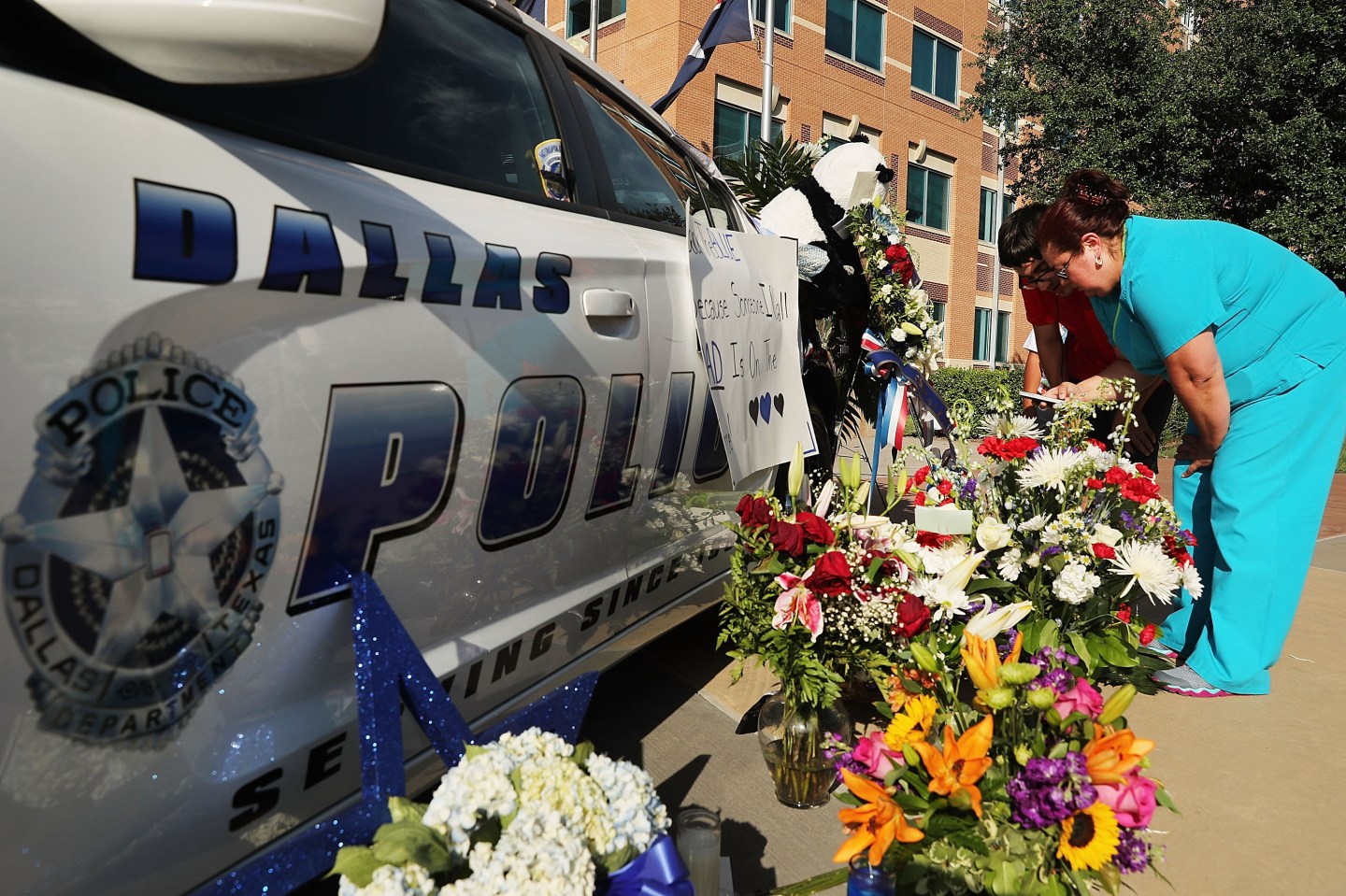 The Dallas community on Saturday continued to mourn the loss of five police officers who were killed in a targeted attack by a lone gunman Thursday night, during a peaceful protest over the shooting deaths of two black men by police in separate incidents this week.

President Barack Obama—who called the attack “vicious, calculated and despicable”—will cut short his trip to Europe for the NATO Summit and travel to Dallas early next week, the White House said. Meanwhile, leaders in Texas are pledging unity in the days ahead.

“Show that we are not harmed, damaged or altered by the cowardly attack by someone who does not stand for Texas values and principles,” Texas Gov. Greg Abbott said at a press conference Friday. A total of 12 police officers were shot in the attack—five fatally. Two civilians were also injured.

Officials have identified Army veteran Micah Johnson, 25, as the gunman, concluding on Friday night that it appears he acted alone. Neighbors of the home he shared with his mother expressed shock on Friday over the actions of the “normal, good kid” they knew.

Johnson was killed by a police-controlled robot bomb after a standoff with law enforcement. Police described him as a “loner” and said he told negotiators he was not affiliated with any groups. Dallas Police Chief David Brown said Johnson, who was black, told police he was upset about recent police shootings. “The suspect said he was upset at white people. The suspect stated he wanted to kill white people, especially white officers,” Brown said.

Military lawyer Bradford Glendening said a female soldier accused Johnson of sexual harassment when he was serving in Afghanistan in May 2014, the Associated Press reported. Glendening said that while Johnson returned to the U.S. on the recommendation that he receive an “other than honorable” discharge, he was given an honorable discharge in April 2015, according to the AP.

The incident comes amid a national debate over racial disparities in the criminal justice system and the use of force by police. Black Lives Matter protesters, whose peaceful march over a spate of fatal shootings by police officers was corrupted by the lone gunman, have condemned the violence and vowed to press forward for change.

“This is a tragedy–both for those who have been impacted by yesterday’s attack and for our democracy,” the group said on Friday. “There are some who would use these events to stifle a movement for change and quicken the demise of a vibrant discourse on the human rights of Black Americans. We should reject all of this.”

In the wake of the shooting, police officers across the country have also described an intensified challenge to their work, especially as many fear similar attacks. Tennessee law enforcement said that a man who opened fire on a highway, killing one and injuring several others may have been motivated by anger over recent police shootings.

“It’s a weird haze over all of us. It’s bizarre,” Philadelphia police Capt. Joe Bologna told TIME’s Karl Vick of the mood surrounding law enforcement. But some cops also say communities have extended extra compassion toward police. “People are saying, ‘Have a good day,’ ‘Be safe out there.’ ‘Be careful,’” said Brian Dillard, another Philadelphia officer. “Believe it or not, I feel more support.”