How Donald Trump’s Sons Are Emerging from Ivanka’s Shadow 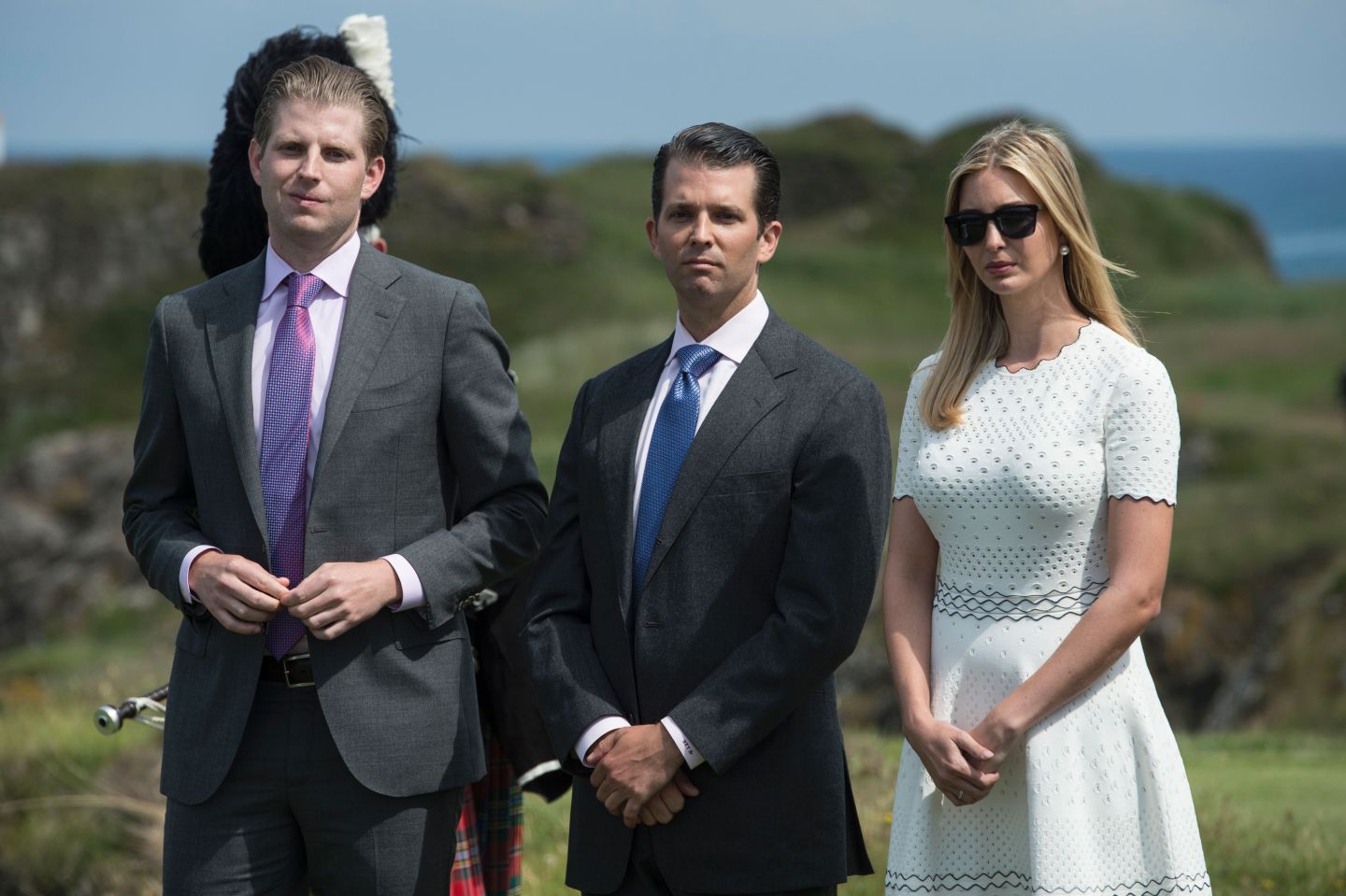 On the day that Corey Lewandowski was ousted as Donald Trump’s campaign manager, it was notable who did the round of interviews and offered spin control: Donald Jr., Trump’s eldest son. “Things had to change,” he told Good Morning America. “It is not an easy thing to do. He got my father to where we are today, which is historic… There is time to move on.”

Although Trump’s glamorous daughter Ivanka has been a visible and constant presence on the campaign trail, Trump’s sons, Donald Jr., 38, and Eric,32, have only emerged as public spokesmen for their father when Trump’s campaign began to falter. Yet, the two have equally important roles in the Trump business empire — and the presidential campaign. In fact, Donald Jr. told reporters that he was involved in the decision to fire Lewandowski. Some press reports noted that Eric and Ivanka were also part of the process.

And, it’s likely that if Trump were elected president, the two sons most certainly would be key advisers as well.

So who are they?

Not quite as at ease in the limelight as their sister, who had briefly been a runway model, the Trump sons have been serving and advising their father behind the scenes for years –and working together as a unit.

A few years ago, I interviewed all three siblings for a book about their father (I didn’t talk to their much younger half siblings, Barron, 10, and Tiffany, 22), and the three described themselves as equal and almost interchangeable parts of the family business. They tend to share responsibilities and move fluidly to fill-in for each other when necessary. “We cognitively work on that,” explained Donald Jr., noting their offices are next to each other and they also socialize frequently. “We see each other and work together every day, and we still choose to vacation together with what little time we get off.”

Trump Jr.’s role in the Lewandowski dismissal was consistent with the troubleshooting he has done in the past for his father–behind the scenes.

Unlike his brother and sister, Donald Jr. didn’t enter the real estate trade straight out of college. After he graduated from the University of Pennsylvania he spent the better part of two years tending bar and having fun in Colorado. He also became an expert hunter and outdoorsman, which distinguished him from his father, whose main experience with wildlife involves gazing down at birds from the top of Trump Tower. The junior Trump’s avocations have helped him serve as a campaign surrogate among groups devoted to hunting, fishing, and conservation.

Although he describes himself as a driven always-on person, Donald Trump Jr. displays little of the public bombast that is his father’s trademark. Nonetheless he is a true loyalist, willing to fight hard when Trump’s interests are threatened.

This was especially evidence when Trump Jr. took the lead in one of the most controversial battles, over the development of a golf course on an ecologically sensitive site near Aberdeen in Scotland. Trump Jr. was effective working behind the scenes, making buy-out offers to property owners, conferencing with lawyers and lobbying politicians. After the Trump company was granted the right to build on fragile seaside dunes, Donald Jr. represented his father in a bitter struggle against a wind turbine project championed by Scotland’s First Minister Alex Salmond.

As Salmond turned from friend to foe, Donald Jr. showed that he could be a street fighter like his dad. He publicly attacked Salmond, claiming the Trumps were victims for taking an ethical stand; he alleged Salmond retaliated against them for not supporting his government’s decision to send imprisoned Lockerbie bombing conspirator Abdelbaset al-Magrahi home because he was dying.

“He asked us to support his decision to release a terrorist that killed hundreds of people,” said Donald Trump Jr. in an interview with The Scotsman of Glasgow. “Ever since we refused to do that he has been a total enemy of ours.”

In fact a Salmond aide had requested Trump’s support for the al Magrahi decision, but at a time when the two sides were getting along swimmingly. The younger Trump’s decision to use this incident showed he was willing to play Trumpian hardball.

In this case it didn’t work. The Scottish government approved the wind energy project. The Trumps then stopped building their resort. One of two golf courses was completed but the housing, big hotel, and other facilities promised remain on the drawing board. The number of year-round jobs created total fewer than 200.

Although he is also involved in the golf business, Eric Trump, 32, was not a public spokesman for the Aberdeen project. He’s long avoided the spotlight and chose Georgetown over the family’s preferred alma mater, University of Pennsylvania. When Eric was a sophomore in college, he was pleased to tell a reporter, “I don’t think I’ve had a person come up to me all year and ask me if I’m in the Trump family.”

During the controversy in Scotland, Eric was charged with developing a winery in Vignola and in a charitable organization called the Eric Trump Foundation. Created in 2006, the year he officially joined the family business, the foundation has raised money for the St. Jude’s Children’s Research Hospital.

This work has distinguished Eric from his brother and sister, who have not been so publicly associated with charity work. (Donald Trump has claimed to have given many millions of his own money to charity, but the Washington Post has found he gave less than $10,000 over seven years. The Post notes that even the Donald J. Trump Foundation — which Trump set up in 1987 to give away his money — show no gifts from Trump himself since 2008.)

The Strange Parallel Lives of Chelsea Clinton and Ivanka Trump

Is Donald Trump a Racist? Here’s What the Record Shows

Although he lags far behind his siblings when it comes to on-camera experience, Eric Trump recently has begun to put himself more directly into the media fray. And as he has given interviews, he has shown an ability to stay on message, even using Trumpian language.

After Lewandowski’s dismissal, Eric went on Fox News to promote the idea that the relatively tiny campaign team was up to the task of winning. He called the operation “lean” but also “incredibly effective.” Brother Donald Jr. used similar language.

Eric Trump also began to sound a lot like his father as he described President Obama’s leadership as “so, so, so, sad” and he displayed a some Trumpian bravado as he took control of campaign financing without any prior experience in raising political cash. The effort, however, apparently included fundraising appeals to politicians in other countries, which is contrary to federal rules.

Eric Trump with at least 3rd fundraising appeal of the day: pic.twitter.com/sZB0XUqyvC

However Eric claimed that in a matter of days the campaign had raised more than $10 million. “Money is flying in. The amount of small donations we are getting online is astronomical,” Eric said.

His father, of course, has a well-earned reputation for exaggeration coupled with a tendency to double-down on outrageous statements; his claims are often hard to verify as his business is privately held. And Trump has not released his tax returns.

But, the Trump campaign will have to file finance reports that will show whether Eric Trump was hyping the numbers.

In the meantime, however, he and his brother Donald Jr., as well as Ivanka, can lay claim to roles at the top of the campaign’s leadership ranks. They may not hold formal titles, but they are, as Trump’s offspring, his most trusted operatives. Eric said it well when he announced, “We are fighting as a family and a very fed-up country to build this historic effort, and bring voters to team Trump.” In his statement, Eric gave the family first position. Thus is has always been for the Trump clan, and it will continue to be ‘til November.

Michael D’Antonio is author of The Truth About Trump, published by St. Martin’s Press June 2016.