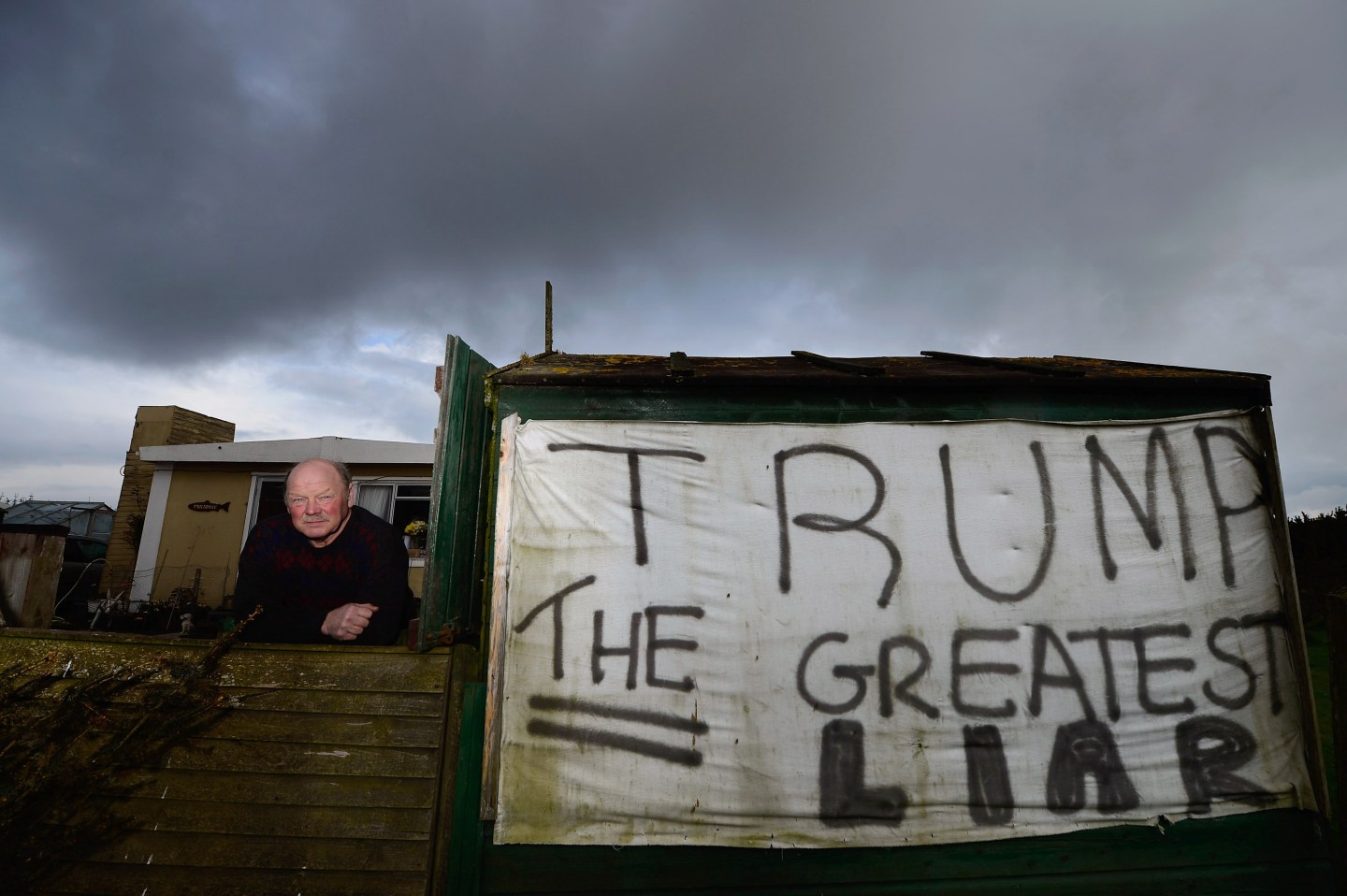 ABERDEEN, SCOTLAND - APRIL 23: Michael Forbes stands beside his shed, near to Donald Trump's golf course which is currently under construction on the Menie estate on April 23, 2012 in Aberdeen, Scotland. Mr Trump will appear before the Scottish Parliaments Economy, Energy and Tourism committee on Wednesday to voice his concerns over the Scottish government's policy of promoting wind power. A decision is expected later this year on the government's plans to erect 11 turbines of the coast next to the Menie estate golf course. (Photo by Jeff J Mitchell/Getty Images)
Jeff J Mitchell — Getty Images

On Friday, presumptive GOP nominee Donald Trump is set to visit Scotland –but there is probably no country in the world where he is least welcomed. Protests are already planned, and Scotland’s current First Minister Nicola Sturgeon is expected to rebuff him.

Trump’s visit is timed for the reopening of the Trump Turnberry, a golf resort Trump bought in 2014 and renovated at an estimated cost of $290 million. But he’ll also visit his other Scottish golf property in Aberdeen, a real estate venture that involved building on wild, legally-protected dunes and ultimately earned him the enmity of many. The real estate developer did get to build the Trump International Golf Links, but through an ugly, conflict-ridden process that delivered a tiny fraction of the thousands of jobs and $1.5 billion investment he’d promised and alienated many, including Scottish leaders, along the way.

The tale of Scotland’s bruising experience with Trump offers a window into Trump’s much-vaunted deal-making. It began in 2005 when then-First Minister Jack McConnell met privately with him to discuss investment possibilities. Trump said he wanted to build what he called “the world’s best golf course,” and McConnell was eager to please voters by bringing investment money to a part of the country dependent on the diminishing resource that is North Sea oil. One of Scotland’s most respected and experienced politicians, McConnell reasonably expected to make a straight-forward arrangement with the investor who would profit from putting money into the country.

The area where Donald Trump, plans to build his golf resort on the Menie Estate in Aberdeenshire November 21, 2007.Photograph by Jeff J Mitchell — Getty Images

In early 2006 Trump flew his plane to Aberdeen, was welcomed with a red carpet and bagpiper, unveiled his plan to build a massive golf resort and residential development on land that included portions of a precious ecological site called the Dunes of Menie. The developer promised that the resort would have two courses, a 450-room luxury hotel and spa, conference center, employee housing, a turf grass research center and as many as 2,000 vacation homes. He said the project would provide an economic windfall, creating some 6,000 jobs, notes The Washington Post.

There was a problem: the dunes had been designated as a “Site of Special Scientific Interest” and therefore off limits to developers. Thus began an epic struggle between developer who made big promises, and a small number of opponents who cherished the dunes and didn’t want to sell to Trump.

Donald Trump in 2006 in Scotland, announcing his golf course plans. He spent the weekend at the Menie Estate north of Aberdeen where he has plans to build a new golf course.Photograph by Jeff J Mitchell — Getty Images

True to form, Trump hired a property scout who tried to hide his identity as he inquired about purchasing land. The developer employed a beauty pageant winner, who also happened to be the fiancé of the local newspaper editor, to be his public relations manager.

Soon the local paper was openly supporting Trump and castigating his opponents. They were branded traitors and “neeps” — Scottish for turnips — on the front page. The government even gave Trump the honorary title of Global Scot, and Robert Gordon University bestowed upon him an honorary degree.

Donald Trump is photographed after receiving his honorary award of Doctor of Business Administration from Robert Gordon University on October 8, 2010 in Aberdeen, Scotland. Photograph by Jeff J Mitchell — Getty Images

The development was ultimately approved in November 2008 and bulldozers set to work the following year. Local businesses anticipated a boom associated with construction and then steady revenues from both the resort and the sprawling new community.

The political tide began to turn against Trump as Scots learned of how he was bullying the few landowners who refused to sell to him. When Susan Munro rejected his bid to buy her property, she said Trump’s workers built a ten-foot high berm of earth around it, blocking her view. Munro’s neighbor just to the north, David Milne, saw Trump’s men plant evergreens twenty feet from his windows when he refused to sell. To the south, farmer Michael Forbes was attacked – his family lived like “pigs,” said Trump — and the developer’s lawyer approached the local government about taking his land by eminent domain.

Opposition to Trump grew, with rallies and protests. An artist displayed caricatures of the man inside the barn on the Forbes property. Hundreds of people became co-owners of the Forbes land, buying tiny interests in the farm in order to make a transfer of the property extremely cumbersome and costly.

In 2012, an 18-hole golf course was opened, but Trump stopped work on the proposed resort. Instead, he focused on fighting the government’s proposed wind farm project that, he said, would obstruct views enjoyed by golfers. That same year, Forbes dressed in a kilt to accept the Scotsman of the Year award, which he won in a public poll.

When I met him in 2013, Forbes told me he decided to reject Trump’s offer to buy his land within moments of meeting the man. “He instantly started boasting about how rich and how successful he is and said he could get my land one way or the other,” he said. “I decided then and there he wouldn’t.”

Although Trump’s mother was Scottish, he seemed to have no grasp of the country’s painful history of land appropriations, which impoverished entire communities and turned small farmers like Forbes, known as crofters, into heroic figures. During a publicity blitz, Trump visited his ancestral homestead on the Isle of Lewes but according to reporters, stayed for less than two minutes.

Was it a big money loser?

In the debate over his development, Trump repeatedly insisted that the Scottish government’s wind energy project–11 offshore wind turbines– be arranged so that golfers wouldn’t see it. When it became certain that golfers might catch sight of the distant windmills from the greens and tee boxes, Trump used that as the reason for reneging on the investment he promised and abandoning the rest of the development. Was this just a pretext for getting out of a money-losing deal?

As the Washington Post has noted, Trump has offered contradictory assessments of the Aberdeen course’s financial health. On filings with the British government, Trump said the Aberdeen course has lost more than £4.71 million since 2012 — the equivalent of $6.9 million. But in a July 2015 disclosure filed in the U.S., Trump valued Aberdeen at “over $50 million” and put his income from the course at $4.2 million between mid-2014 and the end of 2015. Trump’s son, Eric, told The Washington Post that the U.S. disclosure forms “report gross revenue, not net income.”

Some of the value that Trump might claim for this land is the result of him securing government approvals for his planned development. The approvals come with no expiration dates, which means he could be in a very good position financially; should he decide to sell off the land, for instance, it likely will be worth far more because it has the rights for development. As for Scotland, it hasn’t benefitted quite so much. His project has created just 150 jobs, with one golf course, a clubhouse with a restaurant and 19 rooms for rent.

The government retaliated by stripped him of his status as Global Scot and Robert Gordon University withdrew his honorary degree.

More recently, the British parliament condemned Trump’s comments on Muslims and Mexicans and came close to banning him from visiting the country for any purpose. British police officials, Jewish leaders, and politicians from both the labor and Conservative parties have condemned his remarks about Muslims. Few have ever united the United Kingdom like Donald Trump.

Donald Trump Suffers Another Hit to His Golf Empire

Scots I contacted recently said they are dismayed but not shocked by Trump’s rise as a presidential contender. They acknowledged his powerful energy, creativity, and political skills but felt they had been sold a mirage. Until Trump arrived, Jack McConnell’s successor, Alex Salmond, was considered the toughest political fighter the country had ever seen. Trump, seasoned by decades of practice across the United States, made quick work of him.

Once his friend, Salmond will not be present when Trump arrives on his pre-convention jaunt. “We fell out over his belief that being an investor in a country gave you a right to determine its energy policy. And also the way he treats people is poor,” he has said. British Prime Minister David Cameron and Scotland’s current First Minister Nicola Sturgeon plan to ignore Trump as well. He should expect, instead, to be met by protesters who recall how he ran roughshod over the country and now recoil at the prospect of a Trump presidency. Already one put up a Mexican flag on his property.

Someone has raised the Mexican flag on the border of Trump's wildly unpopular golf course near Aberdeen: pic.twitter.com/mXzkQeCpic

A left-wing group called Scotland Against Trump, meanwhile, is organizing a rally. Scottish Muslims have publicly invited him to visit and mosque. They don’t expect him to say yes.

Michael D’Antonio is the author of the new biography, The Truth About Trump, published by Thomas Dunne Books/St. Martin Press.