Donald Trump Suffers Another Hit to His Golf Empire 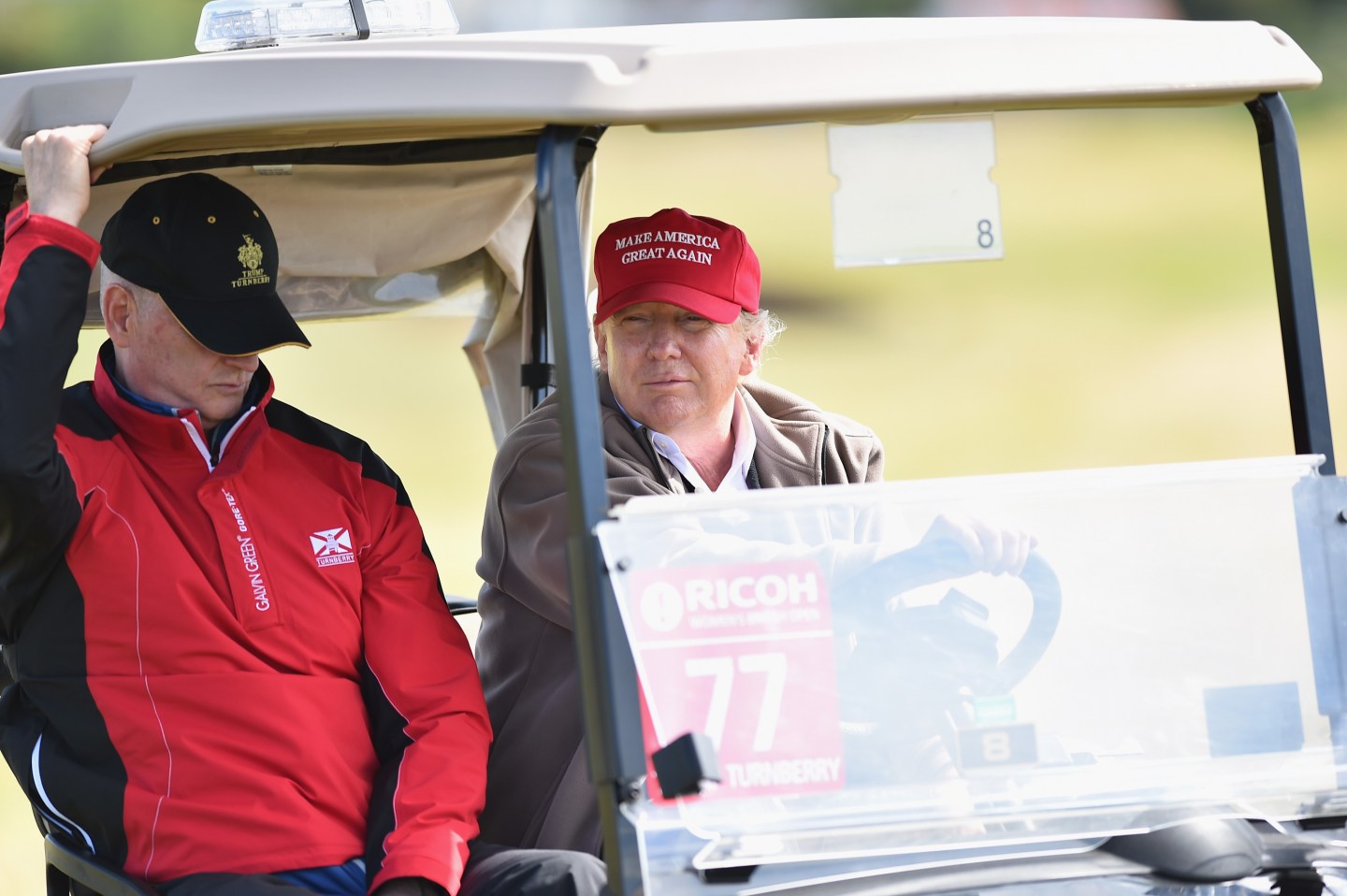 When Donald Trump bought the historic Turnberry golf course in Scotland last year for a reported $60 million, it was with dreams of hosting the British Open there. The stage was set for him to get his wish: reports over the past few years had said that the Royal and Ancient Golf Club of St. Andrews (R&A), golf’s governing authority everywhere outside the U.S., was likely to give Trump the 2020 tournament, officially known as the Open Championship (to golf fans, simply The Open).

Now, after his most recent comments about Muslims, a 2020 British Open at Trump Turnberry is out of the question, according to a report from The Independent on Sunday. “2020 will not happen here,” the U.K. paper quotes an R&A insider as saying. “Turnberry will be back. But perhaps not Trump Turnberry.”

That sounds like as long as Turnberry is linked to Trump, it may not have a shot at ever hosting the prestigious major. The Independent quotes another R&A member as saying, “One word was thrown around: Enough.” The report also has a PGA official in the U.S. saying, “Trump has been good for golf, and golf has been good to Trump. Can we live without him? Maybe we’ll have to.”

There are four “majors” each year in men’s professional golf: The Masters in April, The U.S. Open in June, The British Open in July, and the PGA Championship in August. While The Masters is always hosted at Augusta National, the other three move around.

Turnberry has hosted four British Opens—in 1977, 1986, 1994 and 2009. Trump bought it in April of 2014. Since then, it did get to host the 2015 RICOH Women’s British Open, though the LPGA released a statement that suggested it wanted to move the event, but didn’t have time. “With just three weeks until the championship, a change in venue for this prestigious major simply isn’t feasible without significantly diminishing the event,” the July statement said. “By no means, however, does this decision suggest support for Mr. Trump’s comments. The LPGA will continue its commitment to diversity and inclusion in the game of golf as it has done for the last 65 years.”

This is hardly the first bit of bad news for Trump’s golf business in the past year. Since launching his presidential campaign, a number of his golf relationships have suffered.

In July, after Trump’s remarks about Mexican immigrants, the PGA pulled its Grand Slam of Golf tournament from Trump National Golf Club in Los Angeles. The PGA issued a statement at the time that his remarks, “do not reflect the views of our organizations. While the LPGA, PGA of America, PGA Tour and USGA don’t usually comment on Presidential politics, Mr. Trump’s comments are inconsistent with our strong commitment to an inclusive and welcoming environment in the game of golf.” The same month, ESPN pulled its ESPY charity golf tournament from the same course.

His latest round of shocking comments, this time about Muslims, has set off another round of bogeys. The PGA Tour is reportedly considering moving the WGC-Cadillac Championship from Trump’s Doral course in Miami. And last week, a Dubai real estate firm building a $6 Dubai golf course and resort with Trump cut the candidate loose. The Akoya, by DAMAC Properties, a Trump-branded course, resort and spa, removed a large billboard showing a photograph of Trump golfing, and removed large letters spelling out his name. It then restored his name to the property this week.

Back in February, in an interview with Fortune, Trump shared a philosophy on who should get to play golf. While not particularly shocking, his comments were seen as non-inclusive and met with a lot of criticism in the golf world. “It should be aspirational as opposed to widespread,” he said. “Let golf be elitist… Let people work hard and aspire to some day be able to play golf. To afford to play it. They’re trying to teach golf to people who will never be able to really play it. They’re trying too hard.”

Although Trump Turnberry may have lost its shot at the 2020 British Open, Trump Bedminster, in Bedminster, New Jersey, is set to host the 2022 PGA Championship. It remains to be seen whether that changes, too, as a result of these other falling dominoes.