Donald Trump: Let golf be for the rich elite 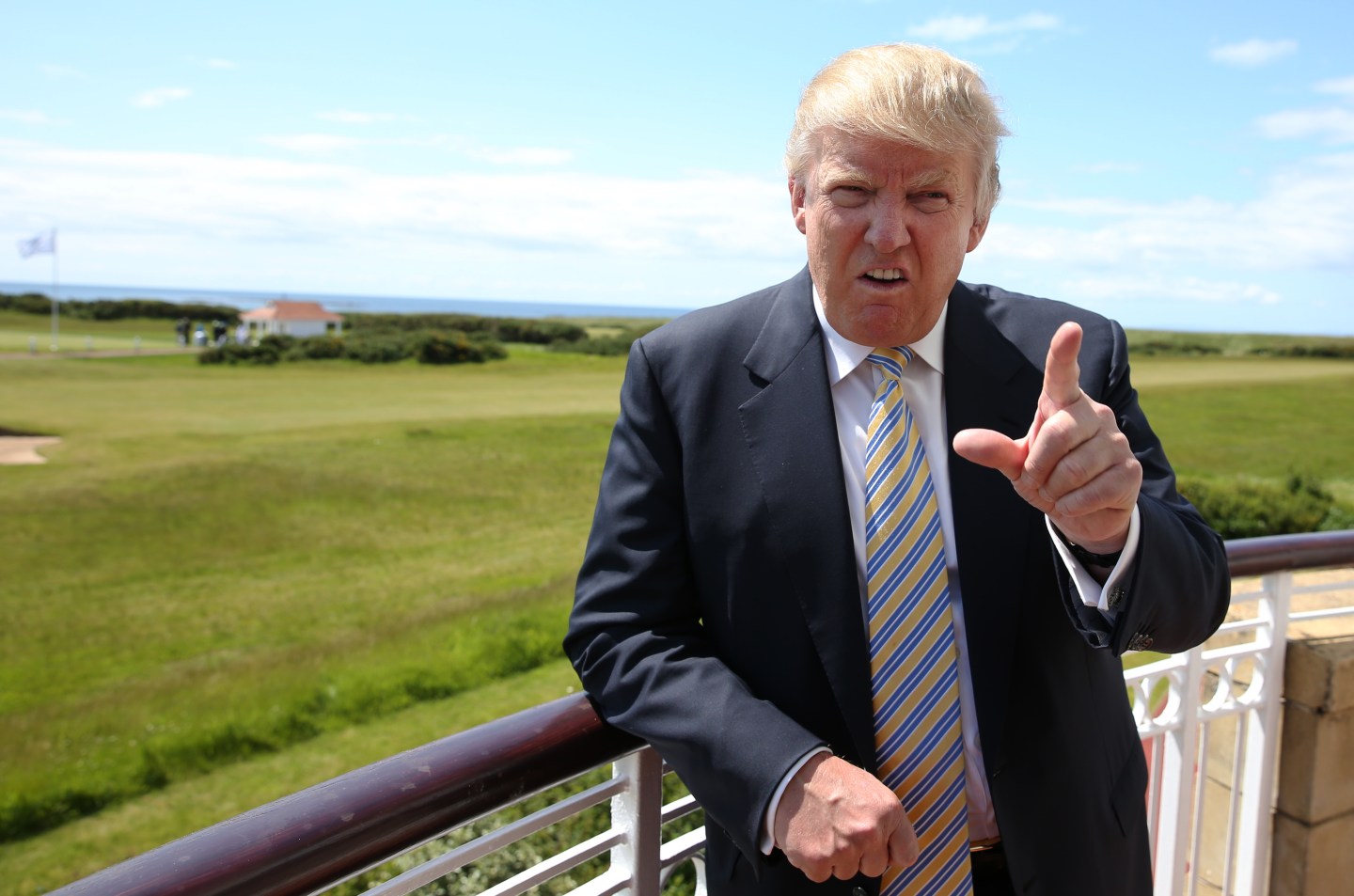 Donald Trump is a 2016 presidential candidate, but he is also a real estate magnate and business tycoon whose portfolio includes hotels, a beauty pageant, a fashion line, a magazine, a cologne, and more. He also happens to own 15 different golf courses, though a recent report suggests that he has overstated the value of his golf empire by $1 billion.

Trump’s golf interests may be about to come under the spotlight more than ever before.

This week, Univision, NBC and Macy’s all cut ties with Trump because of his controversial comments about Mexicans. Attention could soon turn to some of Trump’s golf partners, including the PGA and Cadillac. The PGA entered into an official partnership with Trump last year. Cadillac is not a Trump sponsor but has naming rights to the WGC-Cadillac tournament, which was held this year at Trump National Doral, his course in Miami. Cadillac has a huge operation in Mexico: The Cadillac SRX is made there and accounts for some 40% of Cadillac’s U.S. sales. Cadillac had no comment for this story. The PGA sent Fortune this statement:

“In response to Mr. Trump’s comments about the golf industry ‘knowing he is right’ in regards to his recent statements about Mexican immigrants, we feel compelled to clarify that those remarks do not reflect the views of our organizations. While the LPGA, PGA of America, PGA Tour and USGA don’t usually comment on Presidential politics, Mr. Trump’s comments are inconsistent with our strong commitment to an inclusive and welcoming environment in the game of golf.”

In February, before he was a presidential candidate, Trump spoke to Fortune by phone for an exclusive interview focusing on the business of golf. For nearly 10 years in a row, more courses in the U.S. have closed than opened—but he is bullish on the sport’s future.

Now that he’s running for office, seeking to appeal to a broad swath of the American population, his comments about the sport are especially relevant.

What follows is an edited transcript of the conversation.

Fortune: Golf has struggled in recent years, with so many courses closing. Why have you continued to buy?

Donald Trump: If you have great property, it’s still a great business. But you have to have great locations and really good courses. I have the very best courses, in the best places. At Doral [in Miami], as an example, our “Blue Monster” course opened up, and I’m getting $475 a round, it’s just been so successful.

I will say this: It is very, very hard to buy golf anymore. And you’re right, they just built too many. They built too many courses and they did it in bad locations, in the middle of nowhere. It was the Tiger [Woods] revolution.

A lot of people put golf’s decline squarely on Tiger’s decline. Then they look around for “the next Tiger,” but I’m not convinced there is a next Tiger.

There is some truth to that. The force of Tiger is unbelievable. My wife couldn’t care less about golf. Two years ago, The Masters was on. And she wouldn’t care to watch The Masters, no way. But I called her up, asked what she was doing, and she said, “I’m watching Tiger.” I thought that was very cute. But it was also very emblematic of the power of Tiger.

It’s not an easy life, his life of walking down the street and having people mob you for an autograph. He hasn’t had it easy. But I think you have Rory [McIlroy], and you have some other good young stars coming along. We just announced a second course in Dubai. That was the Tiger one that they stopped, and we just bought it and made a deal with Tiger to go and build the course that they were going to build and never did.

It seems like all the course building is happening abroad now. They overbuilt in the U.S., saturated that market, so now they’re going to go open too many in other countries.

Oh, the boom times are in Asia now. They love golf. That place is exploding, and the Presidents Cup is going there for the first time, and those people consider it akin to the Olympics. China, South Korea — golf is just doing so well there.

The golf business alone is fine. It’s a really good business when you hit it right. You have members that will stay with you for 50 years.

Many pundits say the sport has lost touch with young people and needs to win them back. Youth participation is down, equipment sales are down.

Well, first of all, I think the [participation] data that’s been out there from the National Golf Foundation is bad. I’ve said that. I actually think they’re absolutely incompetent. I think their information is faulty and they’re bad for the game.

One of the other things that happens is these equipment makers, like TaylorMade, they keep coming out with new stuff every six months. It’s almost like planned obsolescence. People are tired of it. They’re not going to buy drivers every six months. And the industry complains and says, “Oh no, look at these golf numbers.” It’s not golf, it’s them.

I think the game is doing well at the high levels, and the things that I’ve been buying over the last 10 years, you could never buy today. I like to buy ‘em when they close, and I get a great price. Doral, you could never buy that today for what I paid. That was bought at the bottom of a market when the world had collapsed, and Miami was not doing well. And now Miami is probably the hottest place in the country. I bought it as a long-term deal for myself and ultimately for my family, and I’ve instructed them never to sell. I only buy jewels. I’m not interested in 9s. Only the 10s.

What do you think of the efforts to make the game younger and more accessible?

I think I’m in a minority, but I feel differently about golf. I feel golf should be an aspirational game, something people aspire to. People should come to golf, golf shouldn’t come to them.

They shouldn’t do many of the things that have been done over the last five years. I think the bigger hole idea is just terrible.

Golf is the sport of business—

I’ve made deals on a golf course that I would have never, ever made over a lunch. I actually told the people at Wharton, “You should give a course in golf.” There’s something about the camaraderie. You get to know people better, they’re your partner. I’ve always said about Obama that I don’t mind that he plays golf, but he should play golf with people he wants to make agreements with.

And again, that’s why I hate to see it cheapened with soccer golf or kick-golf, whatever it is they call it. [Note: He’s referring to either FootGolf, where people play soccer on a golf course, or to Hack Golf, an open experiment to make golf younger that resulted in trying 15-inch holes.] A lot of businesspeople play a lot more golf than they want you to think they play. I know many businesspeople who say to me, “Don’t tell people I’m a good golfer.” They don’t want that image, necessarily. But again, so much business is transacted on golf courses. And it should be aspirational as opposed to widespread.

All the people who love it now, they didn’t play when they were 25. I say whoever comes comes, don’t fight too hard. You try to sell it too hard, it’s a bad thing. Now, when you have a course and no one is going there, I’ll tell you what, that’s a lot of lawn-mowing for a few people. And a lot of watering.

So you’re not a fan of the new innovations and ideas to change the game, open it up a little.

I don’t think it’s going to help anything. Golf should be something beautiful, elegant, something people aspire to play eventually.

It may be elitist, and perhaps that’s what golf needs. Let golf be elitist. When I say “aspire,” that’s a positive word. Let people work hard and aspire to some day be able to play golf. To afford to play it. They’re trying to teach golf to people who will never be able to really play it. They’re trying too hard. Because of the expense of playing, and the land needed, golf is never going to be basketball, where all you need is a court.

All these great athletes, you know what they do when they retire? They do nothing but play golf. Basketball players, hockey players, football players, all they want to do is golf.

Let it be aspirational instead of bringing it down by trying to get players to do it when they’re 15 years old and they’re also learning other sports. I think it’s very damaging to the game.