The Awkward Parallel Lives of Ivanka Trump and Chelsea Clinton 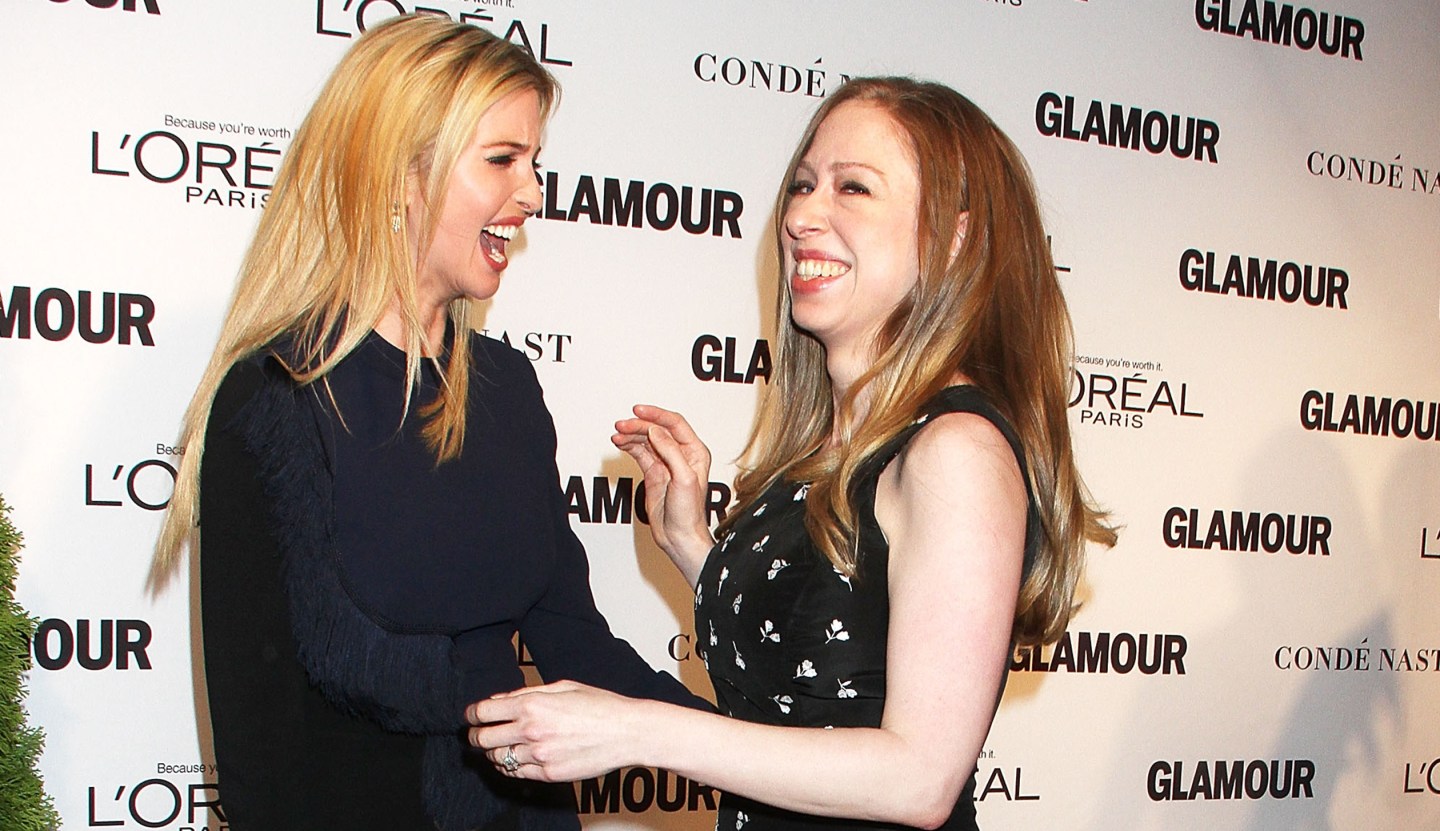 When Hillary Clinton officially declared that she was running for president in April 2015, her daughter Chelsea tweeted, “Very proud of you, Mom!” Two months later, when Donald Trump announced his campaign for the presidency, he chose his daughter Ivanka to introduce him. Ivanka has since appeared for him in several key primary states and released a campaign ad about how “my father… always told me that I could do anything that I set my mind to.” Chelsea, meanwhile, has talked about the finer points of health care policy on the trail for her mother—taking care to note that she, too, is the mom of a young daughter.

It’s easy to see why Chelsea Clinton and Ivanka Trump have become campaign surrogates for their respective candidate parents. Chelsea, presumably, could help her mother close the generation gap and appeal to younger women—something Hillary has struggled with. And with polls showing that women are skeptical that Donald Trump is the best candidate for them, Ivanka—a 34-year-old working mother—has been tasked with convincing them otherwise.

And so, as the 2016 presidential race heats up, both Chelsea and Ivanka have had to figure out exactly how they fit into their parents’ campaigns—without damaging the work they’ve done to build their own careers.

The similarities between the two daughters are uncanny. In a country without monarchs, the Clintons and the Trumps are about as close to American royalty as it comes, and both women grew up in the public eye.

Donald and Ivanka, left in New York in 1991 and Bill, Hillary and Chelsea in Arkansas in 1991.Getty Images; AP

They graduated from tony private schools to the Ivy League. Both wore Vera Wang wedding gowns and married Jewish men, though Ivanka converted and Chelsea did not. Today they both live in Manhattan, are in their mid-thirties (Chelsea is 36, Ivanka is 34), and are mothers to young kids. Chelsea is currently pregnant with her second child and Ivanka just gave birth to her third.

Thank you for all the warm wishes! Marc, Charlotte & I are so excited about our growing family. pic.twitter.com/8SlfUIeKDg

The women, while not exactly BFFs, have long displayed a warm affection for each other. They’ve had to weather some similar storms. Ivanka was only 10 when her father’s relationship with Marla Maples led to a nasty, public divorce, and Chelsea was a teenager when her father’s White House affair was dominating headlines. Later, both Chelsea and Ivanka’s fathers-in-law served time—Charles Kushner did a year in federal prison for tax evasion and making illegal campaign contributions, and Ed Mezvinsky served five years after pleading guilty to swindling nearly $10 million from family and friends.

Most notably, though, they’ve shared the challenge of developing their own independent public personas while maintaining ties with their powerful families. Chelsea and Ivanka have chosen to go into the family business. Chelsea is vice chair of the Clinton Foundation, and Ivanka is an executive vice president at the Trump Organization. Which puts them in an interesting position now that they each have a parent running for president. They are inextricably tied to their parents—not just by name and birthright but by profession.

Because the Clinton Foundation works on issues that are well aligned with Hillary’s talking points, such as public health and the advancement of women and girls around the world, Chelsea’s professional persona often dovetails nicely with her appearances on the campaign stage as first daughter. Her tweets about women entrepreneurs make sense alongside videos of her mother’s diplomatic work and speeches.

In her official capacity, she’s been criticizing the Republican candidates’ vitriol and making appearances at private events for large donors. And she’s shared the stage with famous millennial Clinton supporters like Lena Dunham and America Ferrera to challenge the narrative that Hillary isn’t a candidate for young women.

Which doesn’t mean things have always gone smoothly for Chelsea. Hillary has been criticized for her coziness with deep pocketed donors—and Chelsea drew similar criticism by hosting a fundraiser with Elizabeth Holmes, the CEO of Theranos, a tech startup that is embroiled in controversy. Chelsea also has been called out when her responses to policy questions haven’t accurately reflected the campaign platform.

Donald, top left, with his wife Melania, Ivanka, and her husband Jared Kushner. Hillary, bottom right, with Bill and Chelsea. Both images were taken in Iowa on February 1, 2016.AP; Getty Images

Things seem even trickier for Ivanka, whom The Washington Post recently called “the anti-Donald.” In addition to her role at the Trump Organization, she runs a lifestyle website for working women, which has been described as “GOOP meets Lean In.”

Yet she’s supported her father publicly through such major gaffes as implying Megyn Kelly posed tough debate questions because she was on her period. “Look, my father is very blunt,” she has said. “He’s very direct. He is not gender specific in his criticism of people.”

Even as he’s said disconcerting things about her directly—such as his comments about how he’d like to date her if she wasn’t his daughter—Ivanka has confined her commentary about his campaign to simple platitudes like: “I’m very proud of him as a daughter and as somebody who’s worked beside him for the past decade at The Trump Organization.”

But one has to wonder whether Ivanka—or the editors of her site to empower working women—are worried about a new ad in which women read Donald Trump’s most offensive quotes about the opposite sex.

Unsurprisingly, polling shows he is a deeply unpopular candidate among women—who are the target audience for Ivanka’s lifestyle brand.

Comments about her father are conspicuously absent from her Twitter and Instagram feeds, which are peppered instead with healthy recipes, photos of her kids, and salary-negotiation tips. The omission is revealing: As much as she may publicly deny it, her role as candidate’s daughter is at odds with her ambitions to stand alone as a businesswoman.

Both Ivanka, top right, and Chelsea, bottom right, being interviewed by Pattie Sellers of Fortune onstage at the FORTUNE Most Powerful Women Summit in 2015 and 2013.Getty Images

Behind the scenes, it’s possible that Ivanka is not as blase about his offensive quotes. After all, this is a woman who donated to Hillary Clinton’s campaign in 2007. (Trump also has given to Hillary Clinton and her foundation.) “’I’m a daughter, not a clone. There are times when I’ve disagreed with him,” she told Good Morning America last year.

And at a rally in Tucson recently, Donald told his supporters that Ivanka has “begged” him to start acting more presidential. While Chelsea often addresses specific policy proposals on the campaign trail for her mother, Ivanka has shied away from specifics that might tie her more deeply to her father.

“Her father is hated by half of America and loved by the other half,” a friend of Ivanka’s told Vogue last year. “The half that love him love her, and the half that hate him love her—because she’s not him!”

But, as Donald Trump’s quotes pile up and the campaign intensifies—just yesterday Trump suggested women who have abortions should be punished—one has to wonder how long this will last. Vanity Fair once described the default position on Chelsea as “national sympathy,” and perhaps that is becoming the dominant opinion of Ivanka, too. The two daughters, so alike in almost every biographical respect, will have yet another thing in common.

Ann Friedman is a columnist for New York magazine and The Los Angeles Times. She writes about gender, politics, and culture.