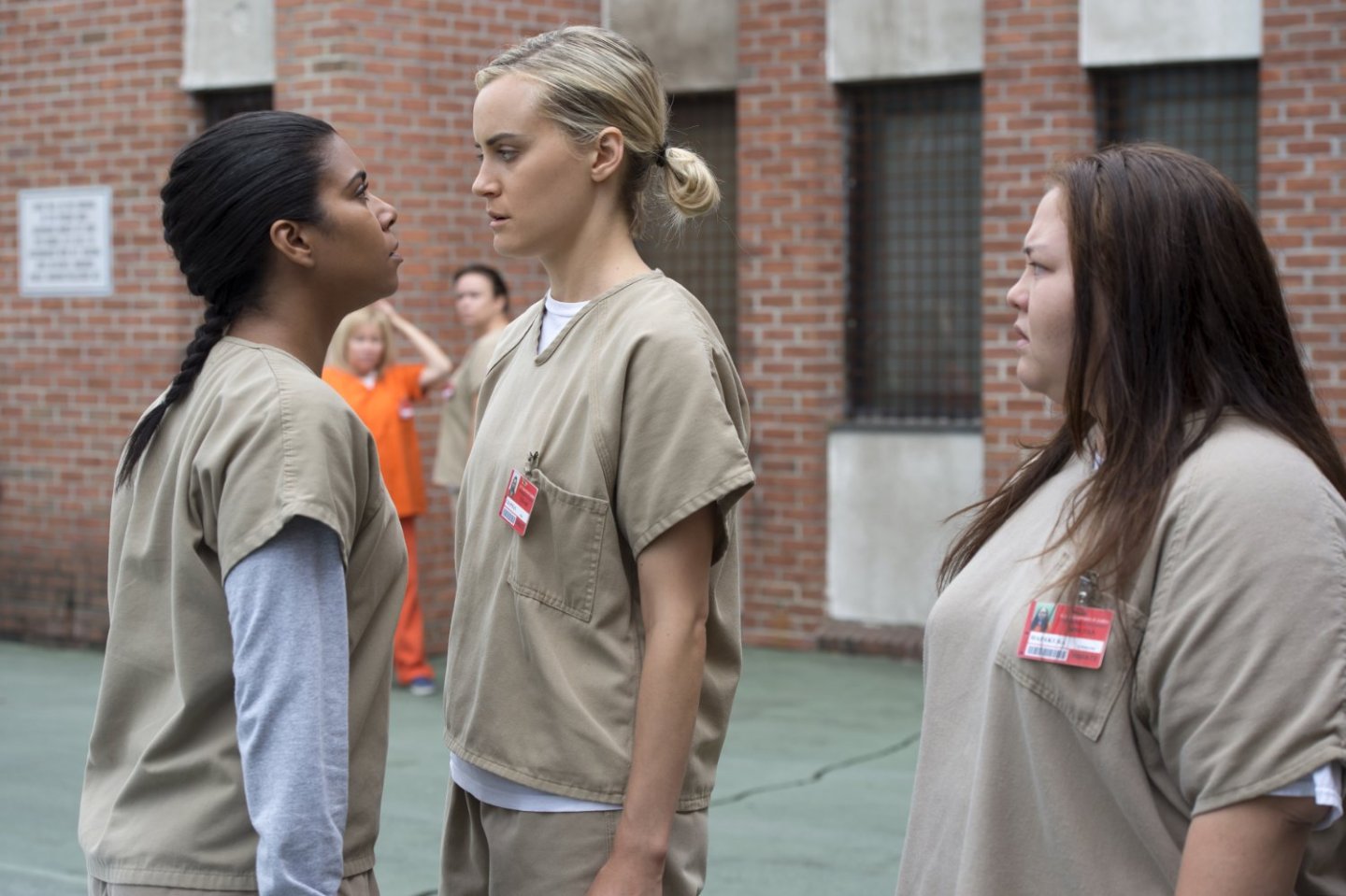 Jolene Purdy, Jessica Pimentel, and Taylor Schilling in Orange Is the New Black (2013)
Courtesy of Netflix

Streaming services like Netflix avoid self-reporting viewership numbers for their shows, which can be confounding for traditional media outlets that are used to judging programs based on their ratings. Hence the industry-wide interest in audience measurement company Nielsen’s unveiling of its first viewer data for a handful of popular streaming shows, including Netflix’s Orange is the New Black.

At a conference in Las Vegas on Wednesday, Nielsen revealed the first batch of viewership data for OITNB, which it started tracking last year with permission from the award-winning series’ producer, Lionsgate. The Wall Street Journal was first to report from the conference that Nielsen said 6.7 million people watched the fourth season premiere of OITNB between June 17 (the first day it was available to stream) and June 19, while 5.9 million people watched the show’s second episode during that same period.

Those numbers would put OITNB firmly among the most-watched cable programs in that same time-period, when HBO’s Game of Thrones was the highest-rated cable program with more than 10.3 million viewers for its June 19 episode, according to Nielsen’s count of live viewing plus DVR-watching over the course of three days. Episodes of two TNT programs, Rizzoli & Isles and Major Crimes, each pulled in roughly 5.8 million viewers during the same period to finish second among cable shows.

In other words, the Nielsen data reveals a strong debut for OITNB‘s most recent season and it also shows that a large percentage of those viewers engaged in at least some “binge”-viewing by quickly watching the season’s second episode within a day or two of the premiere.

Nielsen also revealed streaming data for Seinfeld on Hulu, which paid nearly $1 million per episode for exclusive streaming rights for the classic show last year. Seinfeld reruns reached 706,000 U.S. viewers within the first five days they were available on Hulu, Nielsen said, according to WSJ. Nielsen also said that AMC series Better Call Saul, which is available to stream on Netflix, sees a younger-skewing audience on the streaming site than it does on traditional television. On Netflix, 44% of the show’s viewers fall into the coveted demographic of 18- to 34-year-olds, versus 24% on linear TV.

Sony Pictures Television, the producer for both Seinfeld and Better Call Saul, gave Nielsen permission to release streaming data for both of those shows.

Services like Netflix and Amazon’s streaming arm, Amazon Video, have steadfastly stayed silent when it comes to their tracking of viewer data, despite calls from rival industry executives to release those numbers. Netflix’s primary argument against sharing that data, as Netflix CEO Reed Hastings and chief content officer Ted Sarandos told Fortune recently, is that the streaming service does not rely on advertising sales for revenue like most traditional television networks, so it doesn’t need to disclose viewership statistics.

What is most important for Netflix, and its rival streaming sites, is expanding its subscriber base—something Netflix has done to the tune of more than 80 million global members, which is up 30% year-over-year. (It is worth nothing that Netflix’s subscriber base is global, while Nielsen is only tracking U.S. viewership.)

While the numbers released Wednesday by Nielsen may only offer a tease of how users are consuming streaming television, it’s a useful first step for Nielsen and the traditional networks that are concerned over streaming sites cutting into their own viewership totals and weighing on their ability to sell ads. This data is also part of a broader attempt by Nielsen to better measure the evolving ways that people watch television. The company has expanded its tracking of how Americans watch TV across various devices, and on non-traditional schedules, including tracking social media conversations about TV programs.