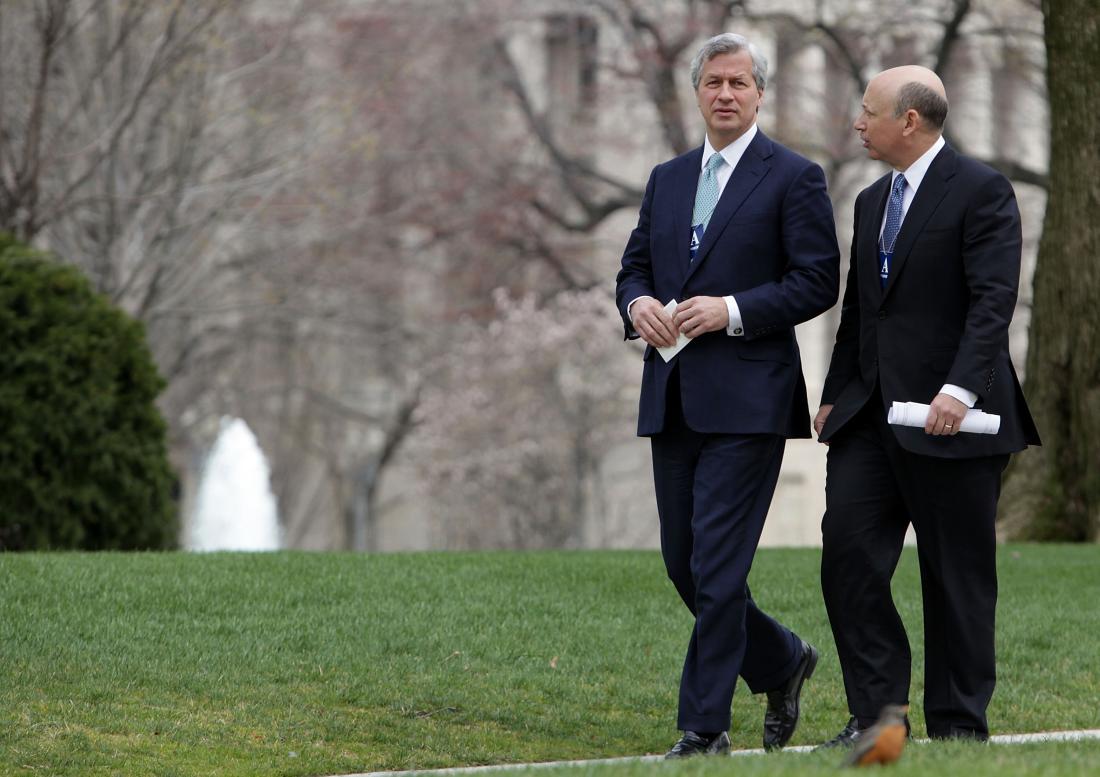 WASHINGTON - MARCH 27: Jamie Dimon (L) CEO and chairman of JPMorgan Chase & Co, and Lloyd Craig Blankfein, CEO of The Goldman Sachs Group, Inc. walk away from the White House after a meeting with U.S. President Barack Obama at the White House March 27, 2009 in Washington, DC. Obama used the meeting to tell the bankers that they must look beyond short-term interests toward obligations each person has in order to make it through the current economic troubles. (Photo by Mark Wilson/Getty Images)
Mark Wilson Getty Images

Global investment banks and large corporations have used London as a European base for years, thanks to low-ish taxes, proximity to the mainland, and, of course, an English-speaking workforce. For the thousands of banking employees there, Thursday’s referendum to leave the European Union complicates matters and threatens jobs, since it would no longer make sense for a non-EU country to be a hub for EU business.

In internal memos, JP Morgan CEO Jamie Dimon and Goldman Sachs CEO Lloyd Blankfein wrote to calm their 16,000 and 6,000 employees whose jobs are at risk of layoffs and moves across the Channel. The CEOs remind employees that this vote did not signify an instant change, but that a lengthy process to increased isolation will begin.

Blankfein tersely noted Goldman’s ability to weather change and stated a commitment to the people involved, as did Dimon. The JPMorgan CEO, in his longer memo, noted that bank would stay in the UK to work with local clients (emphasis ours), which would suggest paring down the large, global European market to a smaller British one. Dimon also expressed hope that future trade deals would see value in UK and European engagement. Here are the memos, via Business Insider.

As you may have seen by now, the British people have voted to leave the European Union, and we respect this outcome. We have had a strong team focused on this potential result for many months. There is no immediate change to the way we conduct our business. A process of negotiating the terms of the exit will now begin, and is expected to take a considerable period of time. Goldman Sachs has a long history of adapting to change, and we will work with the relevant authorities as the terms of the exit become clear. We are committed to our people and our clients, and will work diligently to ensure the best possible outcome. We will continue to communicate with you as relevant information becomes available.

British citizens voted yesterday to begin a new, independent relationship with the European Union. This decision is a seminal moment in European politics and in the history of the United Kingdom.

J.P. Morgan has 16,000 employees in the U.K. We are extremely proud of the work they do and our long history in the country. Regardless of today’s outcome, we will maintain a large presence in London, Bournemouth and Scotland, serving local clients as we have for more than 150 years.

The framework of the U.K.’s engagement with the EU, including trade agreements, will be negotiated over a period of years. For the moment, we will continue to serve our clients as usual, and our operating model in the U.K. remains the same.
In the months ahead, however, we may need to make changes to our European legal entity structure and the location of some roles. While these changes are not certain, we have to be prepared to comply with new laws as we serve our clients around the world. We will always do our best to take care of our people and do the right thing during times of change.

We recognize the potential for market volatility over the next few weeks and we are ready to help our clients work through it. As of today, there are no changes to the structure of our clients’ relationships with JPMorgan Chase or their ability to work with our firm, but again this may change in the coming months or years.

We are hopeful that policymakers will recognize the immense value created through a continued open economic engagement between the U.K. and EU members. As negotiations offer more clarity over the coming months, we will communicate with you and with our clients regarding any relevant changes.