Why Rising Credit Card Defaults Could Be Good for the Economy 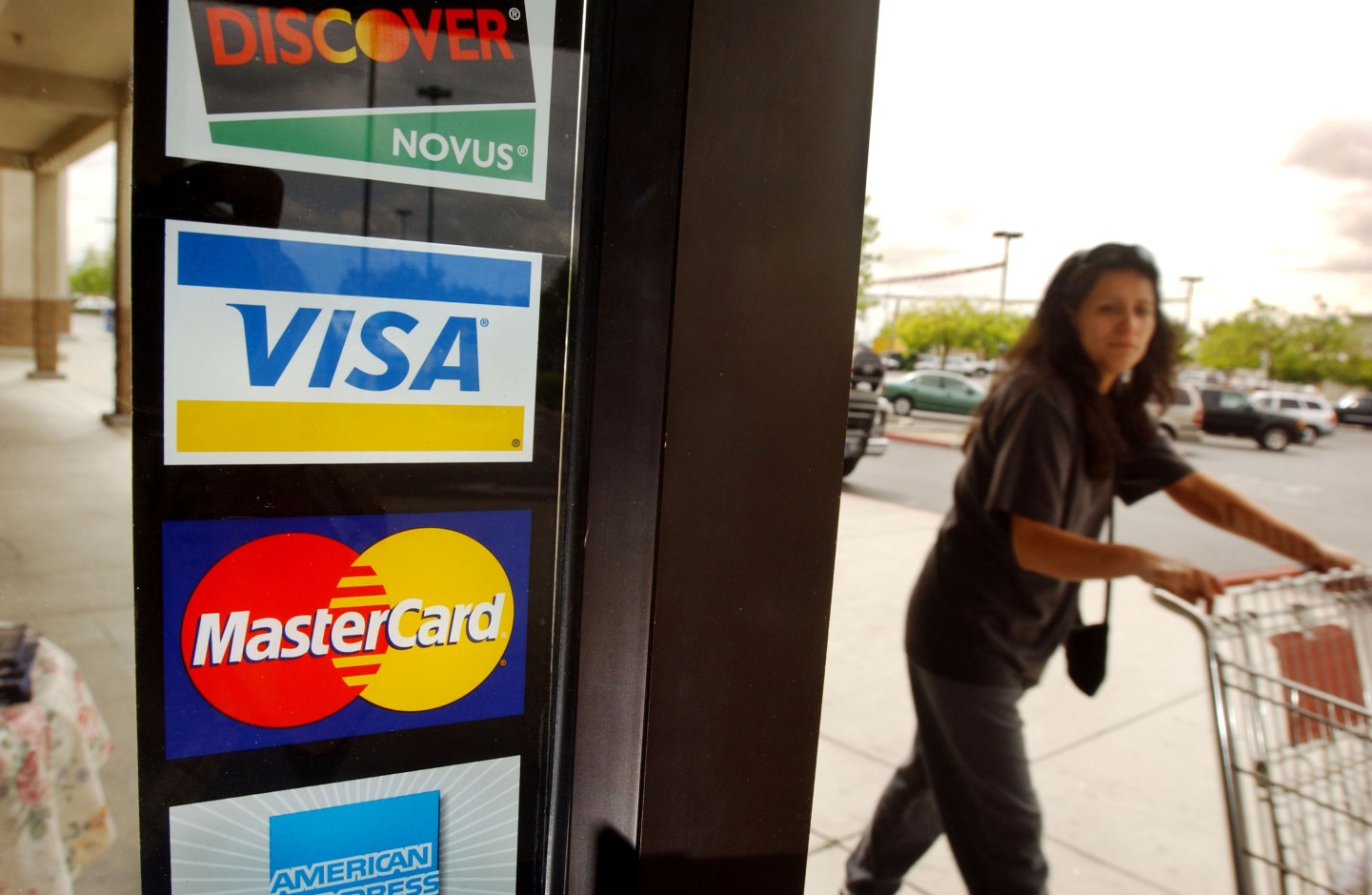 Investors flew into panic this week about the health of credit card companies, interpreting a slight rise in default rates as an omen that consumer spending isn’t so healthy after all, and that things might be turning. However, the economy might not be as overdrawn as the credit card default numbers would suggest.

Driving the selloff was an announcement Tuesday by the parent of Synchrony Bank, which is in the business of issuing store-branded credit cards from retailers including Walmart (WMT) and Amazon.com (AMZN), that it now expects a higher default rate of as much as 4.8% over the next 12 months, up from the 4.5% maximum it had previously forecast. Shares of Synchrony Financial (SYF) plummeted more than 13% following the announcement, and dragged down shares of other credit card providers including Capital One Financial (COF) and Discover Financial Services (DFS) and even American Express (AXP).

Synchrony aside, though, credit card defaults—also known as charge-offs, because banks count them as a loss after accounts become 180 days past due—are actually at their lowest rate in decades, averaging just about 3% in the first quarter of 2016. That rate was as high as 10% at the height of the Great Recession. Still, the default rate has crept up in recent months, worrying investors that it could be the proverbial canary in the coal mine, portending another debt crisis and general economic disaster.

But that’s not what’s happening here—and increasing credit card default rates at Synchrony Financial and other companies are actually an indication that the economy is improving. It’s important to remember that while banks don’t make money if you default on your credit card payments, they also don’t make a whole lot of money if you pay off your balance completely each month. Because banks make money by charging you interest on the credit card debt that you haven’t paid down, they like it better when you don’t pay them back in full right away. And in order to find that ideal type of customer, they’re approving credit cards for more people with spottier credit histories whom they might have rejected just a few years ago.

And while that may not be good news for charge-offs, that’s good news for the economy. Those people can help boost consumer spending and economic growth. Of course, they’re also more likely to stop paying entirely, resulting in charge-offs.

“We have historically low charge-off rates—there’s only one way they can go, and that’s going to be up,” says Odysseas Papadimitriou, CEO of CardHub, who was previously a marketing executive at Capital One.

It’s the price credit card companies will have to pay in order to boost their bottom lines: Even as Synchrony Financial’s charge-offs rose to $780 million in the first quarter of 2016 versus $668 million a year earlier, its net interest income—what it earns from charging customers on their unpaid credit card balances—jumped nearly 12% to more than $3.2 billion. That was fueled by a 13% increase in Synchrony’s outstanding loans to consumers.

Indeed, credit card balances have climbed back towards their record high of $1.02 trillion, set in July 2008, according to The Wall Street Journal. As consumer spending continues to increase, those balances could surpass $1 trillion this year.

And while Synchrony, and its investors, appear to have been caught by surprise, other credit card companies have been anticipating the jump in defaults for a while. The trend is simply “growth math,” Capital One CEO Richard Fairbank explained during a conference call with analysts in April, after the company’s default rate ticked up slightly in the first quarter compared to the prior year. Capital One, like many card issuers, has recently extended credit to first-time cardholders and riskier consumers who may have been denied credit in the years following the recession. Those new loans are beginning to “season”—meaning they’re now old enough to make up a bigger part of what the company is owed, as well as what it has to write off as a loss, Fairbank said.

The rise in credit card default rates has been sharper at Synchrony Financial, which already tends to have higher charge-offs because retailers’ credit cards “attract a more downmarket customer,” Papadimitriou says. Still, the jump at Synchrony stands out. Capital One, which he says also caters to “subprime” cardholders, actually reported that its charge-off rate declined in May from the previous month, to 3.99%, according to a regulatory filing Wednesday. The company is forecasting a rate of about 4% this year, and slightly above that in 2017.

The default rate on Discover cards also declined in May to 2.4% from 2.5% in April, the company said in a filing this week. Waiving off analysts’ concerns about defaults on a recent earnings call, Discover’s CFO Mark Graf described the credit environment as “benign,” leading the company to approve more new credit card applicants and expand credit lines. With the intention of growing its loan portfolio, Discover is also planning ahead for more of those new borrowers to default, setting aside reserves to cover those inevitable losses.

“They’re lending to more people, and charge-off rates are going to go up, there’s no question about that, but that’s not a bad thing,” says Papadimitriou. And banks like Synchrony and the others will benefit too—as long as most of their cardholders pay them back eventually.