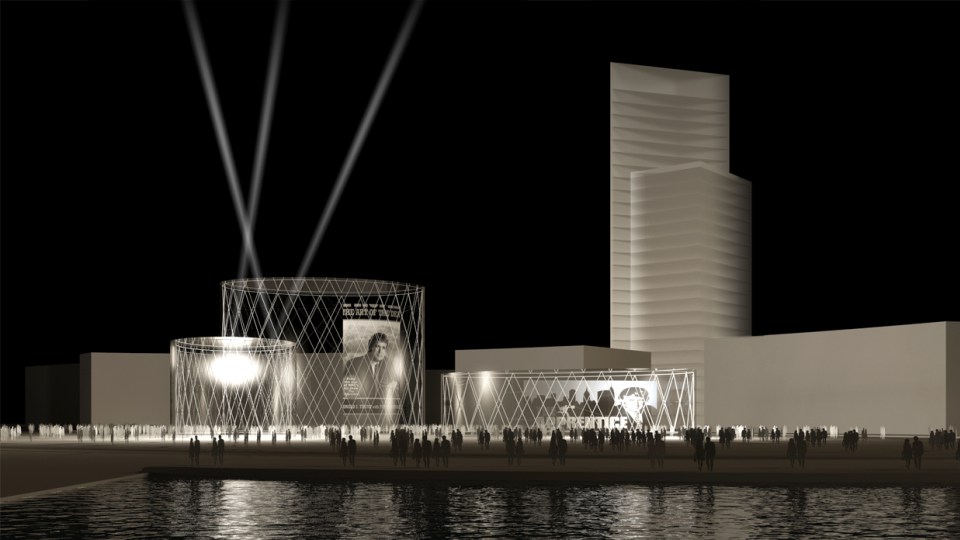 Aside from his recent foray into politics, Donald Trump is best known as a real estate developer and former reality TV star. But, the presumptive GOP presidential nominee currently has a hand in more than 500 companies —and that’s not including his many failed business ventures, including a vodka brand, steaks, an airline and the (allegedly fraudulent) Trump University.

It turns out there is another business to add to the list of Trump business ventures that failed to live up to the bombastic pitchman’s hype: movie studio. On Tuesday, The Hollywood Reporter offered an in-depth look at the plans for Trump World Studios, a film and television studio complex Trump proposed to build and run himself in Florida.

In typical fashion, the billionaire proposed to not just build a studio but the biggest studio in the country—twice the size of the Universal Studios Florida theme park and nearly ten times the size of the Walt Disney theme park Disneyland, The Hollywood Reporter said.

At the time, Trump had vowed it would be “a spectacular success.”

He even hired a design firm, John Fotiadis Architect, to mock up plans for the complex:

So what went wrong?

Reports from 2012 describe Trump’s studio as the brainchild of former Miami-Dade County Commissioner Joe Martinez. Mounting a mayoral bid in Miami-Dade County at the time, he had big plans to turn Homestead, Fla., the a suburb of Miami where Trump wanted to build the movie complex, into a film industry hub. (It helped that Miami was already a popular Hollywood filming location.) According to THR, Martinez won over both Trump and his wife, Melania (and he even once pitched the studio complex to Hollywood director Michael Bay, who Martinez said expressed some interest in filming there).

Trump’s proposal to local officials included him leasing 800 acres of government-owned land for $1 per year in exchange for spending “hundreds of millions” of dollars to build the studio complex. But, while Martinez tried to win over his fellow county commissioners, there were too many obstacles in the summer 2012. Several pieces of the government’s land had already been promised to other projects.

What’s more, the land was also the habitat of an endangered snake species, and it was in close proximity to the (very noisy) Homestead Air Reserve Base. (THR notes that Trump even asked the county commissioners about relocating the military for the sake of his proposed movie studio.)

The Miami Herald reported as late as November 2012 that Trump was “steadfastly” standing by the proposed complex. Regardless, the project appears to have died around that time, with THR reporting now that Trump was reportedly uninterested in other possible locations for his film studio and that much of the property in Homestead “remains largely vacant and undeveloped.”

When THR asked Trump about his abandoned movie mogul ambitions, the GOP presidential candidate was simply said, “It was a job I was thinking of doing, but I didn’t do it.”

Tuesday’s report from THR marked the first time since 2012 that Trump’s long-abandoned movie mogul ambitions have received much attention in the media. Though the story is oddly reminiscent of Funny or Die’s parody video from earlier this year, in which Johnny Depp starred as Trump in a spoof of a self-made biopic.

Fortune reached out to the Trump campaign for further comment on the project and will update this article with any response.