Why Melania Trump Would Be an Ultra-Traditional First Lady 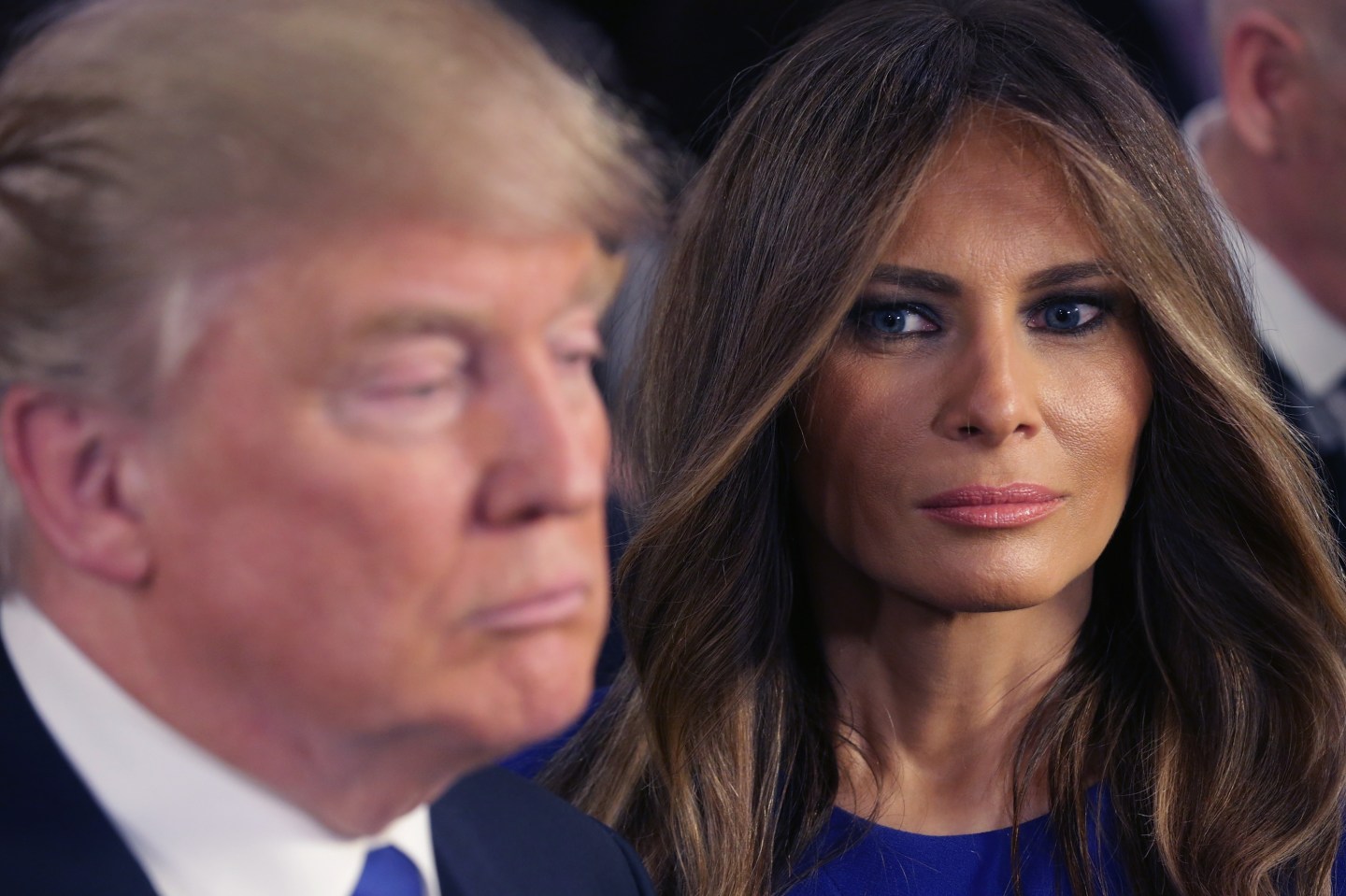 DETROIT, MI - MARCH 03: Republican presidential candidate Donald Trump and his wife Melania greet reporters in the spin room following a debate sponsored by Fox News at the Fox Theatre on March 3, 2016 in Detroit, Michigan. Voters in Michigan will go to the polls March 8 for the State's primary. (Photo by Chip Somodevilla/Getty Images)
Photography by Chip Somodevilla Getty Images

After this week’s Indiana primary the country is poised to endure a six month, bruising battle between two of the strongest and most polarizing personalities of the modern political era. But on the sidelines an equally intriguing contest will take shape between the spouses of Donald Trump and Hillary Clinton, both of whom would break new ground as either the first former supermodel or the first man to occupy the East Wing. A former two-term president, Bill Clinton is a known quantity, but Melania Trump remains an enigma.

Melania has been mostly quiet and invisible on the campaign trail, letting her step-daughter Ivanka Trump assume a bigger role. “My hands are full with my two boys – my big boy and my little boy!” Melania often says. Elegant and reserved, she does not relish the spotlight, appearing only occasionally with her husband since he jumped into the race last June.

Now that her husband is the presumptive GOP nominee, what kind of First Lady would she be?

Born in 1970 in a village near Sevnica, Slovenia, which was then part of Yugoslavia, Melania moved to New York to pursue her modeling career in 1996 and became a permanent U.S. resident in 2001 and a citizen in 2006. She would be the first foreign-born first lady since John Quincy Adams’ wife Louisa, who was born in London. But Louisa’s father was American and Trump has made his reputation railing against immigration, putting Melania in the awkward position of defending her husband’s controversial stance as an immigrant herself. She does not shy away from it; when asked about her own views on immigration she says, “You follow the rules. You follow the law.”

Melania met Trump in 1998 and they got married seven years later. As a model, she appeared in magazines like Vogue and Harper’s Bazaar. Melania would not be the first model in the White House; Pat Nixon and Betty Ford both worked as models. But she would be the first supermodel, and one who posed naked. In this controversial photo shoot in 2000, Melania posed naked for the cover of British GQ wearing handcuffs and sprawled on a bearskin rug aboard her then-boyfriend Donald Trump’s Boeing 727. (Trump later was angered when a pro-Cruz group used the image in an ad.)

She would, however, be the first third wife of a U.S. president. (Nancy Reagan was Ronald Reagan’s second wife.) Although it may seem difficult for a three-time married man to profess to “family values,” Melania Trump already has gone out of her way to follow in the footsteps of women like Laura Bush and Michelle Obama who have prioritized motherhood during their tenures. Like Michelle, whom a friend said “never wanted to be a public person,” Melania often talks about her dedication to her ten-year-old son Barron.

Michelle also speaks of putting her daughters first, but she has privately expressed her frustration at having to give up a lucrative career in Chicago to be first lady. In a 2013 Vogue interview President Obama acknowledged as much, calling his wife a “great mom” but alluding to the personal sacrifices she had made for his career. “I think it would be a mistake to think that my wife, when I walk in the door, is, Hey, honey, how was your day? Let me give you a neck rub. It’s not as if Michelle is thinking in terms of, How do I cater to my husband?”

Does Melania feel these kinds of conflicts? Will she, in the future? It’s hard to know since her public persona has tended to be so one-dimensional. She lets Donald have his space; she’s not “needy” or “nagging,” she told GQ. She tends to say little about her marriage beyond that (and after her interview with GQ, which she complained on her Facebook page was an example of the “dishonest media and their disingenuous reporting,” she is not likely to change that practice.)

Melania has said that she would want to follow in the footsteps of “traditional” first ladies like Betty Ford and Jackie Kennedy. “I would support him,” she said, referring to her husband.

The only problem is that Jackie Kennedy and Betty Ford were far from “traditional.” Jackie escaped Washington as often as she could to travel to the Kennedy’s home in Virginia horse country, even when the president wanted her at the White House. She also had moments of incredible and unconventional bravery as when she vowed to stay by his side during the Cuban missile crisis when the threat of nuclear war was greater than it has ever been. Betty was endlessly pushing boundaries, including revealing in a famous 1975 “60 Minutes” interview that she would be fine if the Ford’s teenage daughter Susan had an affair.

Melania’s friends say she was a homebody during her modeling days in New York. She has attempted to carve out a career launching a jewelry line on QVC, which sold out in 45 minutes. (Her line of caviar-infused anti-aging creams has reportedly been less successful.) But it seems Melania would be more like Laura Bush focusing on her husband’s happiness and domestic tranquility than either Jackie Kennedy, Betty Ford, or Michelle Obama who all had more complex feelings about the role of first lady.

White House residence staffers will not be intimidated by Melania’s stunning looks. Former White House Usher Worthington White says the staff was awed by Michelle’s beauty. “Mrs. Obama is every bit the equal to Melania Trump and more,” White says.

A former senior staffer to President George W. Bush mused that Melania is not unlike Nancy Reagan: both fiercely defended their husbands during periods of incredible unpopularity. Nancy, however, was much more controlling of her husband’s image and unlike Melania, who says she has privately asked Trump to tone down some of his charged language, Nancy very publicly inserted herself into every facet of her husband’s work.

Shortly after the Reagans left office, Nancy sat behind artist Everett Raymond Kinstler for more than two hours as he painted President Reagan’s official portrait in his New York City studio. Kinstler, who had painted several portraits of President Ford, was tense. “It was terribly distracting,” he recalled. When he asked Nancy if she would rather go sit in the living room, she replied, unmoved, “No, I really would like to stay here while you work.”

It’s hard to imagine Melania involving herself in minute details in such an obvious way. She told a GQ reporter, “I chose not to go into politics and policy. Those policies are my husband’s job.” For Melania, avoiding the political fallout of her husband’s controversial policy proposals may be easier than it has been for any first lady in fifty years because she has already detached herself from politics and would play a more traditional role in the White House than any first lady in recent history.

If she were to become first lady, that detachment also might help shield her from the blowback that presidents inevitably get. Susan Porter Rose, who worked in the East Wing for Pat Nixon, Betty Ford, and Barbara Bush, says she remembers Barbara Bush in particular “tuning out” what was said about her husband if the headlines were too negative. President Nixon’s West Wing aides went so far as to make sure that his wife Pat didn’t get the newspapers delivered in the White House residence during the final days of Watergate. Melania seems to already possess that habit of self-preservation.

Lady Bird Johnson once said a first lady must be a “showman and a salesman, a clotheshorse and a publicity sounding board, with a good heart, and a real interest in the folks” from all over the country, rich and poor. It’s hard to imagine why anyone would want such an undefined role. Perhaps if Trump loses, there might be some relief; if he wins, though, Melania will have an incredible amount of power, and influence, should she choose to use it. “Everyone’s going to take a phone call from the first lady,” says Dana Perino, who was President George W. Bush’s press secretary.