Donald Trump Revokes the Press Credentials of the Washington Post 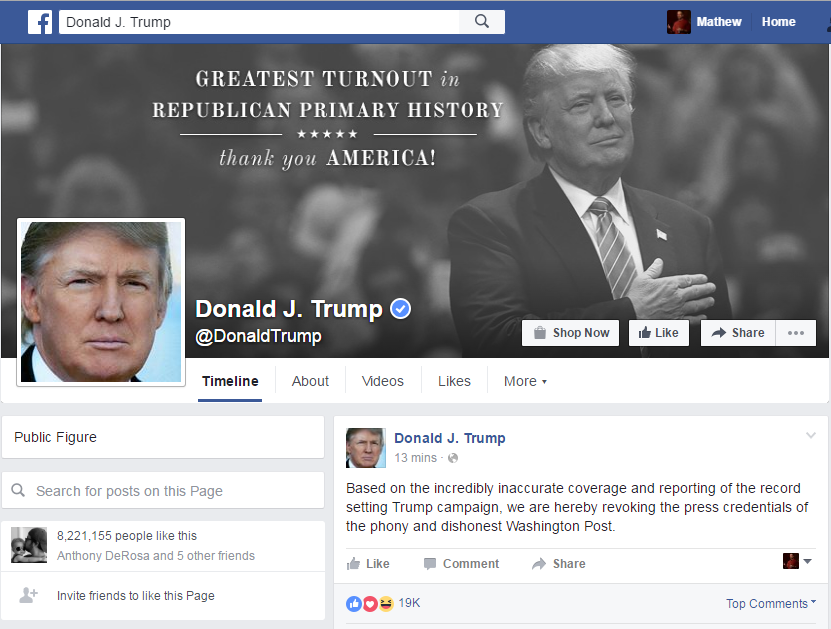 Republican presidential candidate Donald Trump announced late Monday afternoon that he was revoking the press credentials of the Washington Post for being “phony and dishonest.” It wasn’t immediately clear what the paper did to spark this move, but Trump said in a Facebook post that he was doing so because of its “incredibly inaccurate coverage” of his campaign.

In a previous Facebook update that was posted less than an hour earlier, Trump provided some clues as to why he wanted to punish the Post‘. According to the candidate, the newspaper was being phony and dishonest because it used a headline for his recent speech that said “Donald Trump suggests President Obama was involved with Orlando shooting.”

Washington Post executive editor Marty Baron said in a statement that Trump’s decision “is nothing less than a repudiation of the role of a free and independent press,” and that the newspaper would “continue to cover Donald Trump as it has all along — honorably, honestly, accurately, energetically, and unflinchingly. We’re proud of our coverage, and we’re going to keep at it.”

In a sign of just how low Trump’s standing is with the Washington press gallery, a host of media organizations took to Twitter to congratulate the Washington Post and its reporters for being blocked from official coverage of the Trump campaign. Many of them have either been banned altogether or had their credentials revoked after displeasing the candidate.

According to a list that Mother Jones pulled together earlier this year, the Trump campaign’s media block list either includes or has included the National Review, the Des Moines Register, Univision, BuzzFeed, the Daily Beast, the Huffington Post and Mother Jones. At one point in March, the Trump campaign turned down a request from Politico, apparently because of the new outlet’s unflattering coverage of former Trump campaign manager Corey Lewandowski.

In a statement released after the ban was announced, the Trump campaign said that the Washington Post “covers Mr. Trump very inaccurately,” and that the candidate didn’t want to work with a publication that he said has “put its need for clicks above journalistic integrity.” The statement went on to allege that the Post is being “used by the owners of Amazon” as a political lobbying tool so that “they don’t have to pay taxes and don’t get sued for monopolistic tendencies.”

Media outlets: if Trump is not revoking your press credentials, what are you doing wrong?

Worth noting that even during the height of Watergate, Nixon never banned the Washington Post from the White House

In addition to blocking or banning media outlets, the Trump campaign also restricts journalists to specific areas at events, often referred to as “pens.” In one case, a Time Inc. photographer who stepped just a few feet outside of one of these corrals in order to take a photo was tackled and thrown to the ground by a Secret Service officer working for the Trump campaign.

Trump has made a habit throughout his campaign of referring to the press in less than flattering terms, calling them “scum” and “the absolute worst.” And he has also talked about how he plans to “open up libel laws” if he becomes president, so that it would be easier for him to sue media outlets that publish unflattering reports about him.

From a modern social-media perspective, one of the reasons why Trump is so blasé about banning traditional media organizations is that he knows he can get his message out regardless using Twitter, Facebook and other social tools. And he can also count on coverage from the major TV networks, not just because he is the front runner for the Republican nomination, but because it is good for business, as CBS president Les Moonves has pointed out.